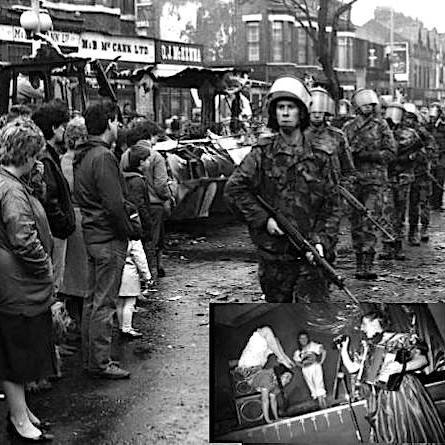 Has circus changed the world or is the world just one big circus?  It takes a Solo Performer to see all sides.

In Something Great!  My Life in the Belfast Circus, Jennifer Dempsey recounts her college days at Queens College.  While bombs are going off in town, and the IRA and other organizations are shaking up culture in Northern Ireland, Jennifer’s quest past cellulite, while bouncing in and out of school, leaves her with a kind of general depression.  She yearns for solace in a large grin.  While power-walking on campus, she finds a sign that ignites her imagination again.  It is a sign to join the circus.

We don’t have to live in terror, we have to laugh.  We don’t have to stow away, we have to present with many.  Ducking past the memories of car bombings in the public streets, walking mightily along the peace wall that separates the Protestants and Catholics, Jennifer learns to bridge worlds, creating sanctuary in the world of the circus near the Botanical Gardens.  Practicing cartwheels or pyramid formations, she finds her comfort in the circus arts.  As directed by Allen Lane on stage, we can see the circus artist in Jennifer, presenting gymnastic form, accentuating bones on a pronounced mask, missing only the visible, bright, red nose.

This 80-minute solo performance includes chilling images of the unsteady social climate around Northern Ireland.  When Jennifer’s father visits, the anguish and joy of being away from life in the States grows.  An AFL-CIO worker and a strong parent aligned to the Washington, DC culture, Jennifer’s father reminds her that she can and should do something great.  Eventually, Jennifer decides not to travel back to the US, starve herself, or rebound into her 200 plus pound body frame.  She chooses, instead, to direct the whole circus in Belfast.  Winning awards, featured in profiled articles about Women Directors, she realizes that it is the next best thing to winning the Nobel Peace Prize.

The United Solo Festival has honored the work of one-person shows for over 20 years, combining dance, improv, comedy, and storytelling.   Giving the audiences the opportunity to vote until the end, recognition is an integral part of the Festival.  Audience members can gather to see who will be presented with the United Solo Special Award presented at the Gala.

Something Great!  My Life in the Belfast Circus played on October 16 at the United Solo Festival.  The Festival is running until November 20 at Theatre Row, located at 410 W. 42nd Street in New York City.