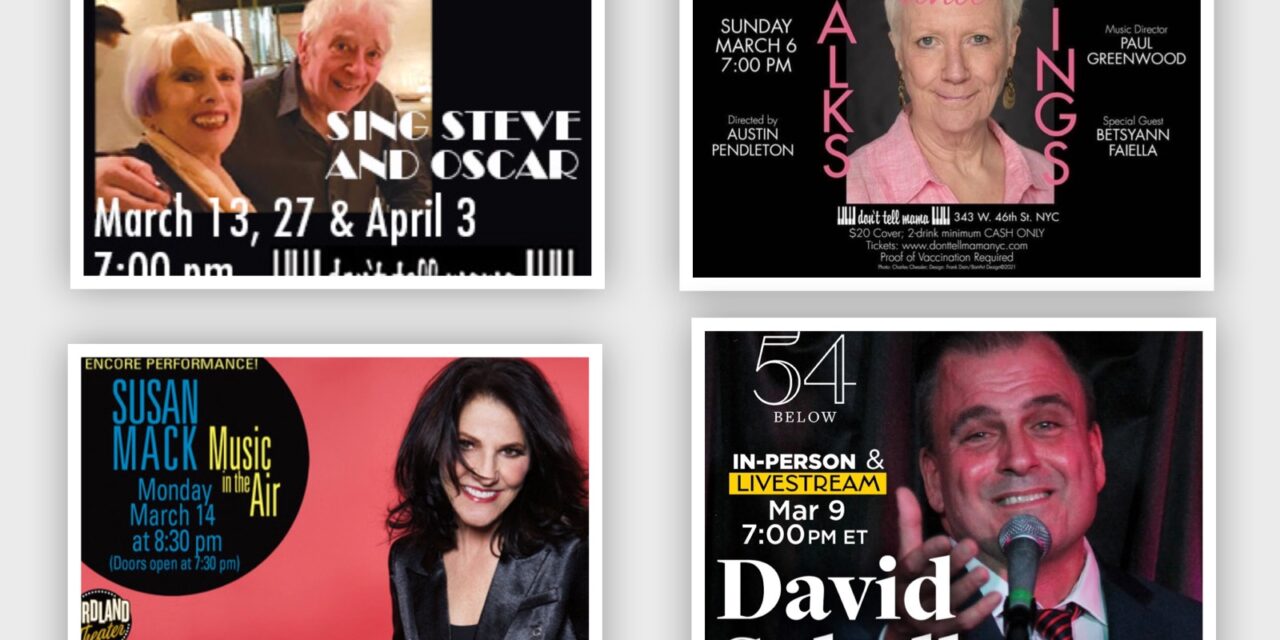 David Sabella celebrates his new CD ‘Time Heals’ live and streaming at Feinstein’s/54 Below on March 9 at 7 pm with musical director Mark Hartman. Best known for his years on Broadway, as the co-starring role of Mary Sunshine in the 1996 revival of Chicago (with Bebe Neuwirth, Ann Reinking, Joel Grey). Sabella has had a notable career on Broadway as well as in opera. Tickets: https://54below.com/events/david-sabella-time-heals/

*Susan Mack returns with an encore performance of her hit show Music in the Air on Monday, March 14 at 8:30 pm at Birdland Theater with Ted Rosenthal, musical director, (arrangements Tedd Firth), David Finck on bass, Ray Marchica on drums. The show is directed by Lina Koutrakos. Tickets: https://birdlandjazz.com/event/susan-mack-music-in-the-air-in-the-theater/

Julian Fleisher returns to Joe’s Pub with Chapter One Spring of his Four Seasons show on March 14 at 7pm. (subsequent dates thru 2022: June 16, Sept and Dec.) with songs, sequins and special guests. Tickets: https://publictheater.org/productions/joes-pub/2022/j/julian-fleisher/

Join Artemisia LeFay in “Ghosts of Weimar Past”in her Birdland debut – – a program of musical time travel, in which the spirit of cabaret and vaudeville are honored from the birth to the death of Weimar Berlin. It features an all- female cast of musical characters. Birdland Theater March 21 at 8:30 pm Tickets: https://birdlandjazz.com/event/artemisia-lefay-ghosts-of-weimar-past-in-the-theater/

Lisa Dennett, actress-singer, ASL interpreter, will appear at Don’t Tell Mama April 2nd and 9th at 3:30 pm with “I’ll Say I Love You” the Songs of Jim Croce. She’ll be accompanied by Sean Harkness, musical director on guitar. The show is directed by Lennie Watts.  Tickets:  https://donttellmamanyc.com/shows/6642-lisa-dennett-i-ll-say-i-love-you-in-a-song-4-2-22