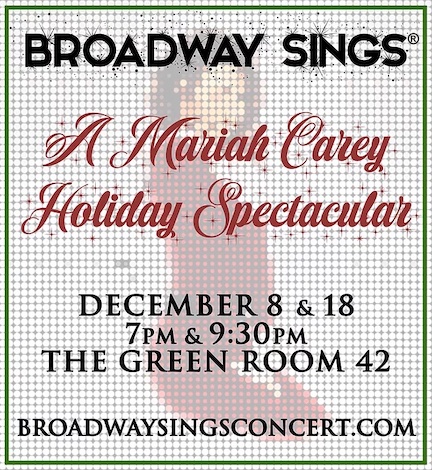 Broadway Records announced today the forthcoming release of Caroline, or Change (The New Broadway Cast Recording) which will be made in collaboration with Roundabout Theatre Company under the new Broadway Records label imprint, Roundabout Records. The album, completing recording today, Nov. 16, will preserve the full score and will be available digitally on Dec. 17.  The double-CD release will be available in the theater and on BroadwayRecords.com mid-to-late December.  The CD will be available at all major retailers for Martin Luther King Jr. weekend on Jan. 14. The double-disc set is now available for pre-order at www.BroadwayRecords.com

The McKittrick Hotel (530 West 27th Street, NYC) today announced its grand reopening with the return of legendary celebration, NEW YEAR’S EVE: The Grand Hotel on Friday, December 31. Guests are cordially invited to don their most decadent attire for a one-of-a-kind New Year’s Eve celebration with dancing, open bar, midnight countdown, and live performances throughout the evening. Revelers can enhance the evening on Maximilian’s List for expedited entry at any time and access to Oz’s Boudoir bar for the evening,or reserve a Champagne Table exclusively for their party. www.mckittrickhotel.com

Attendees are welcome to dine at the hotel’s rooftop garden bar and restaurant, Gallow Green, before the event. Visit www.mckittrickhotel.com/gallow-green for menus, reservations, or to customize a private gathering.

Producer Eric Krebs, in association with Amas Musical Theatre (Donna Trinkoff, Artistic Producer) announced today that the critically-acclaimed hit Off-Broadway production of Romeo & Bernadette: A Musical Tale of Verona and Brooklyn, with book and lyrics by Mark Saltzman, music adapted from classic Italian melodies, directed and choreographed by Justin Ross Cohen, and starring the original cast will enjoy an in-town out-of-town engagement at Theater 555 (555 West 42nd Street – between 10th and 11th Avenues) for a limited engagement on its way to the previously announced anticipated Broadway run.  Previews are set to begin on Tuesday, February 1, 2022, with an official opening on Monday, February 14, 2022. Tickets are currently available through April 10, 2022, at www.VenueTix.com. For more information visit www.romeoandbernadette.com.