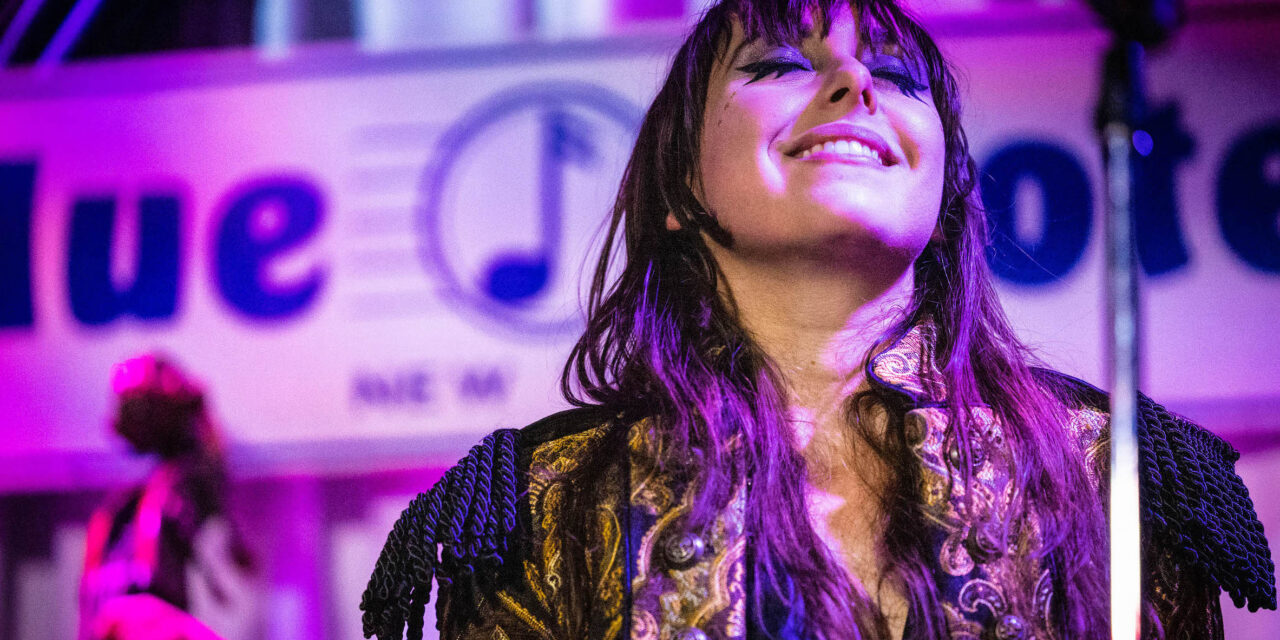 Whatever you do, don’t label Veronica Swift.  The enormously talented Swift, only 27, has been on a meteoric rise in the world of vocal jazz for some years.  Growing up surrounded by jazz royalty in the form of her parents (jazz singer Stephanie Nakasian and the late bebop pianist Hod O’Brien) and the bebop cats they performed with, like the legendary Jon Hendricks, Swift came pre-seasoned to conservatory.  She is a different kind of performer.  Constantly evolving and reinventing herself in the tradition of pop stars like Madonna and Lady Gaga, with Veronica Swift you can expect change, whether in her appearance or her music.  To paraphrase a famous expression, Swift is a lot of jazz, and more than a little bit rock and roll.

Now, under new management and recording for a new label, Swift seems ready to pivot.  With her own band of top-notch musicians and new charts, she put together an eclectic collection of familiar material and surprising new choices.

Dressed in a form-fitting, bell-bottom leather jumpsuit and short gold vest, her hair in Chrissie Hynde bangs, Swift looked like a rock star, with swagger to match.  At her Blue Note show, she started with several of the signature songs you’d expect at a Veronica Swift show, including “How Lovely to Be a Woman” (Charles Strouse/Lee Adams) and “A Little Taste” (Dave Frishberg). In “How Lovely,” she sang the last line operatically, like an aria.  “I couldn’t help myself,” Swift told the capacity crowd.  “A Little Taste” had strong solos from trumpeter James Sarno, who arranged it, and bassist Alex Claffy

“Fantasie-Impromptu” (Frédéric Chopin) gave an opportunity for Mathis Picard to show off his classical piano skills.  The pianist, sporting long dreadlocks, a red kerchief and an open shirt, could pass for Johnny Depp in a pirate movie.  This melody was the basis for “I’m Always Chasing Rainbows” (lyrics by Joseph McCarthy), which Swift sang in a sweet and surprisingly old-fashioned manner, with the kind of lovely, downward lilt associated with Judy Garland.

In “You’ve Got to Be Carefully Taught (Richard Rodgers/Oscar Hammerstein II), sung with the verse, Swift sang in a nearly Middle Eastern chant before breaking into a short burst of scat singing, and let loose briefly after the next chorus.  This was the only song in which she scatted, although she would later pepper the set with other forms of non-verbal vocal prowess.  In the next song, “Getting to Know You,” another Rodgers and Hammerstein tune, she traded vocal “bass” riffs with Alex Claffy with ease.

The set took a major shift towards rock with the inclusion of electric guitarist Chris Whiteman on “Trust in Me” (Richard Sherman, Roger B. Sherman) from Disney’s “The Jungle Book.  In a masterful use of non-verbal vocalizing besides scat, she “doubled” Dave Mann’s alto flute and hummed a counterpoint harmony.  The arrangement was reminiscent of Ellington’s “Caravan” in its approach, with a Middle Eastern flavor combining alto flute, drums and bass.  Drummer Brian Viglione’s name may be known to astute readers from his duo act, The Dresden Dolls.  It was Swift’s cover of a Dresden Dolls song that brought her to his attention.

What would happen if you mixed Duke Ellington with Jimi Hendrix?  You might get Swift’s version of “Do Nothin’ Till You Hear from Me” (Duke Ellington/Bob Russell) as a hard rock blues, with Swift channeling Janis Joplin, and Whiteman wailing the blues on his sunburst Fender Stratocaster.

There might be no more-unlikely a medley than “Big Spender” (Cy Coleman/Dorothy Fields) and “Papa Was a Rolling Stone” (Norman Whitfield/Barrett Strong).  Swift urged the crowd to sing along for the latter melody.  Here, and for the remainder of the set, Swift showed her incredible versatility. `

Veronica Swift’s latest incarnation may confound some of her fans, but she is unleashed.  Sure, jazz purists and some of her base will no doubt be perplexed by the rock and roll.  Yet she will doubtless gain new fans who prefer this side of her.  As Swift continues to grow as an artist and in stature, she will continue to delight, confound, and surprise her fast-growing base of admirers.

Photos: Matt Baker Photography or others as noted.