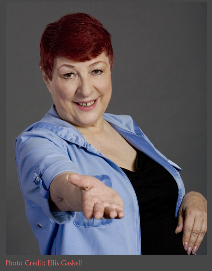 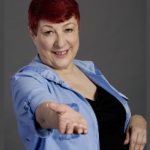 There was a gasp when the effervescent Vickie Phillips announced that she was turning 80 that very day (April 24th at the Metropolitan Room), a birthday she shared with her—much younger!—music director Gerry Dieffenbach, her stalwart and witty accompanist for this program delving into the works of Brel, Weill and Aznavour.

Her hair in a bright red short coif and wearing a tailored black suit, Ms. Phillips gave her all to these musically complicated songs, often with tongue-twisting lyrics. Brel’s wry “I Loved,” which ends with the line “I’ve forgotten your name” (!) was sung ardently, giving that punchline the proper “oomph.” Another Brel song with a twist was “My Childhood” which begins in an idyllic tone and veers into the darkside. Again, Ms. Phillips got it just right as she did with the exuberant “Carousel,” the song that literally spins faster and faster. (The English lyrics to the Brel songs were written by Eric Blau and Mort Shuman.)

She sang a cross-section of Kurt Weill’s work in a medley that included two from Lady in the Dark, “One Life to Live” & “My Ship,” written with Ira Gershwin, which she sang with a languid grace; a touching “September Song” (Maxwell Anderson); and a lovely “Speak Low” (Ogden Nash).

She spoke a while about obtaining the rights to Charles Aznavour’s songs, in particular “Sailor Boys” which details the harbor affairs of the title characters, leading to a pregnancy. Her dedication to this particular song was evident. Aznavour’s big hit, “Yesterday When I Was Young” (English lyrics by Herbert Kretzmer), was sung as a meditation, rather than in the usual over-the-top pop song style.

She ended the program with Brel’s anthem “If We Only Have Love” which had the yearning quality that only a person who has seen it all could conjure.

Mr. Dieffenbach not only was an excellent pianist, but provided skillful harmonies and witty responses.

Ms. Phillips’ voice is a bit ragged around the edges now, but she has total control over it and knows how to get the most out of her slightly diminished vocal resources.

Vickie Phillips Celebrates Her Birthday with the Songs of Brel, Weill and Aznavour – April 24, 2014