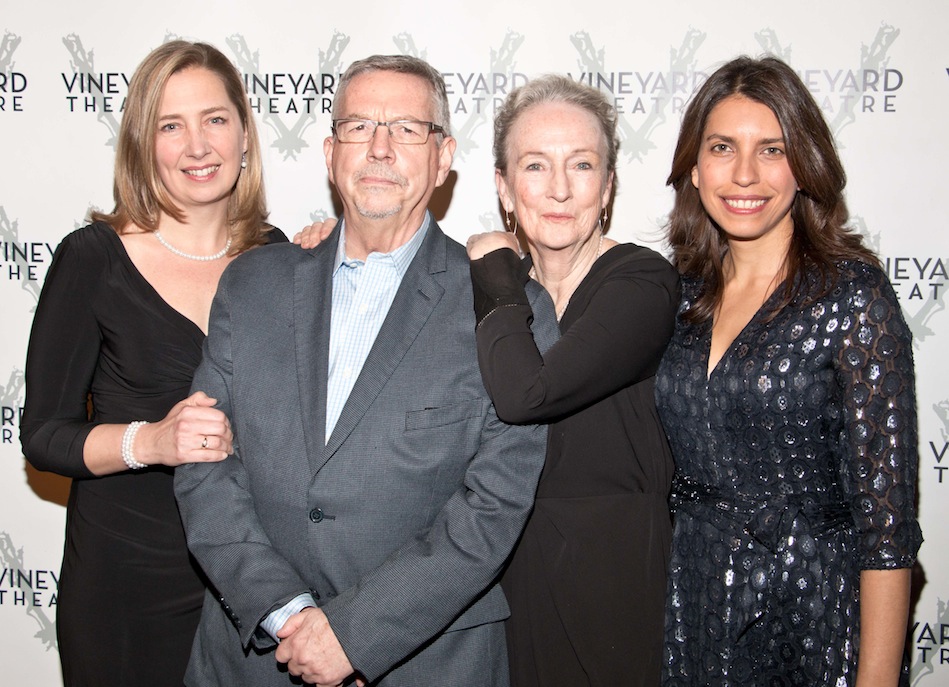 The Edison Ballroom was filled to capacity on March 14th as two theater greats were honored for their untiring and unique contributions to the Vineyard Theatre as well as to the entire world of theater.

Sam Rudy, everyone’s favorite publicist (whose clients include Hamilton, LaMaMa, Cherry Lane Theatre, Ma-Yi, etc.) hails from a dairy farm in Rebersburg, Pa. and thanked the cows for putting him through college! He arrived in New York in 1979 and was swooped up by the great Shirley Herz who taught him the art of schmoozing. He has been publicist to the Vineyard for 25 years. Kathleen Chalfant, a Board member and now President, has been tirelessly giving her talent, not only as a great actress in the American theater, but to also perpetuate the wonderful work of the Vineyard.

It was evident by all who spoke and performed that love was in the air! Hosting the glamorous night were Ryan Spahn and Michael Urie, referred to by Urie as the Neil Patrick Harris and David Burtka of Off Broadway. Performing was the great, baggy panted, Bill Irwin (“Me, Myself and I”); Veanne Cox (“Commerce and Art”); Ann Harada and Anika Larsen (“The More You Ruv Someone”); Rebecca Naomi Jones (“Come Down Now”); Santino Fontana’s perfect choice (“Sam’s Song – The Happy Tune” with audience participation); Molly Ringwald (I”ll Be Seeing You”); The Nields (“Easy People”); Gabriella Pizzola (“Ring of Keys”) and a big closing featuring Jared Loftin, Bonnie Milligan, Larry Owens, Ryann Redmond, Max Wilsox (“Feels a Little Bit Like Love”). Some of the songs came from shows that had their initial productions at the Vineyard and shows that were represented by Sam Rudy.

The evening was more than a little bit like love, it was a well deserved BIG HUG to two of the most deserving theater folks.