Wake You Up – A Musical 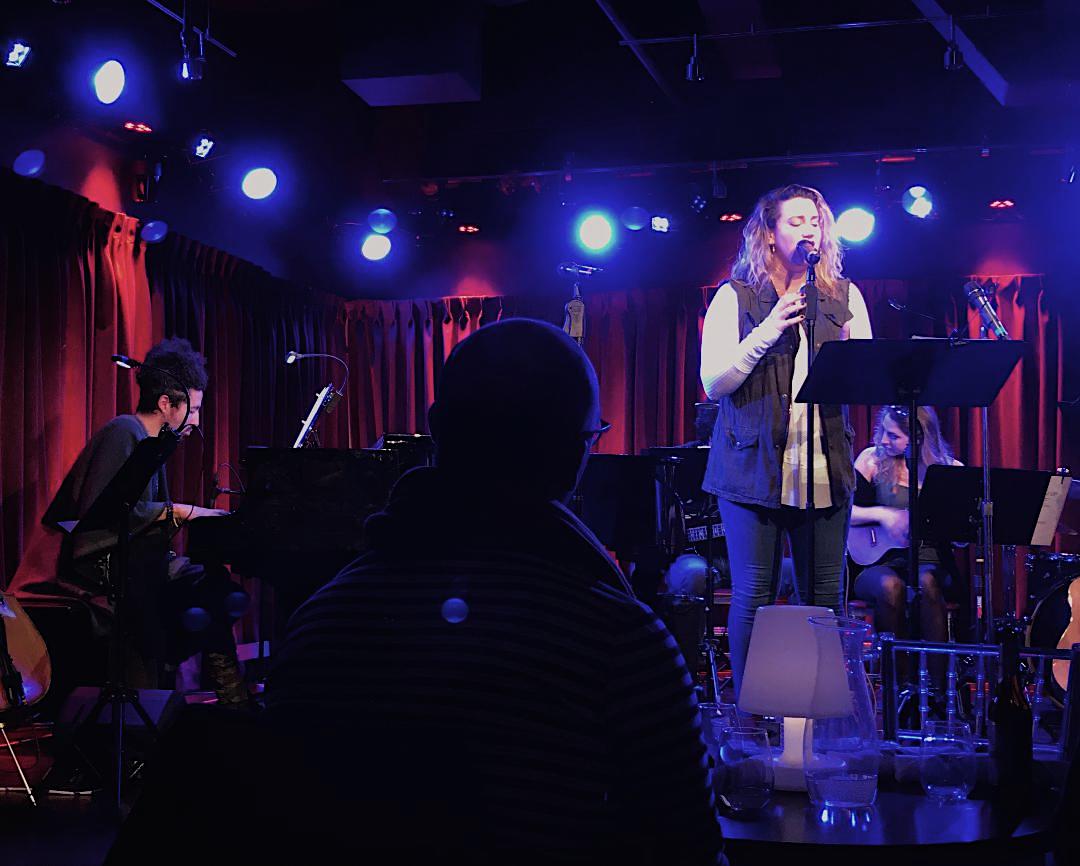 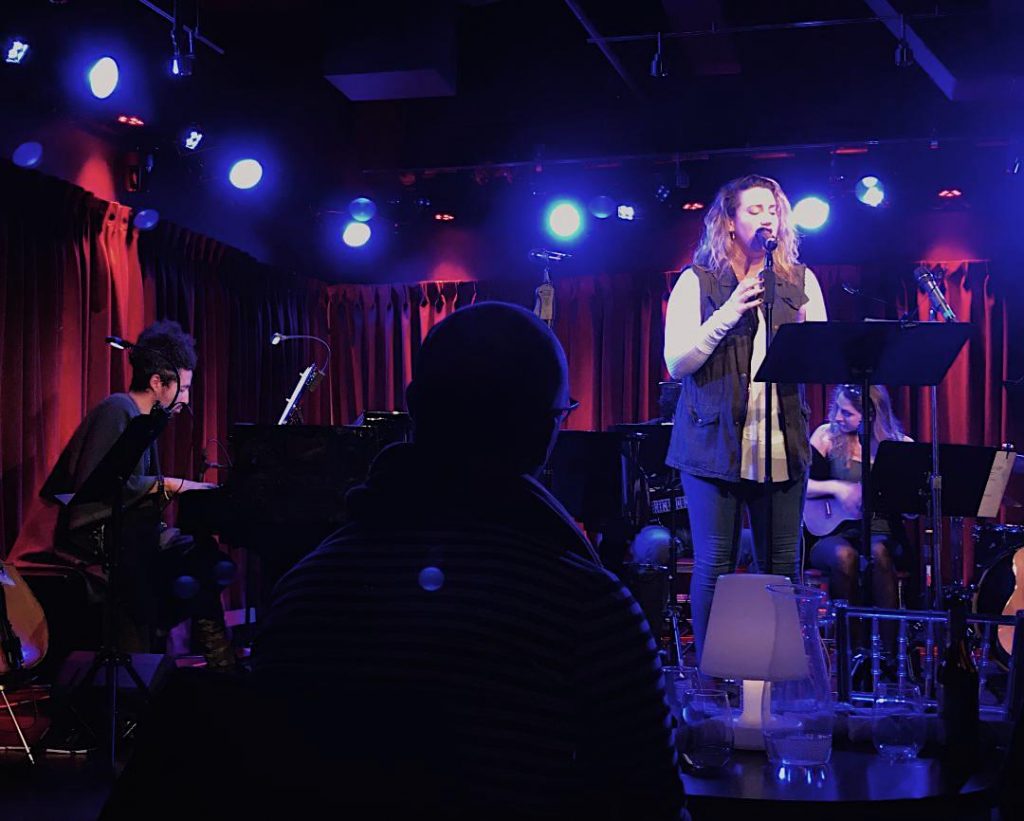 “Wake You Up” is a musical from the all-female writing team of Taylor Pearlstein and Shannon Molly Flynn. A talented cast of vocalists performed a concert debuting the music of “Wake You Up” at The Green Room 42. Flynn narrated the show between songs while Pearlstein joined the band on the ukulele.

“Wake You Up” follows four young people: Eli, Jordan, Ally and Molly. Eli has just moved to New York City from his conservative hometown where his father is the pastor. He reconnects with his estranged childhood friend Jordan. Jordan, a poet, is from the same town, but was ostracized and sent away when he came out as gay. Addy is Jordan’s roommate, a singer who recently went through a breakup and has been dealing with severe anxiety. Molly, a DJ, is another friend of Jordan. 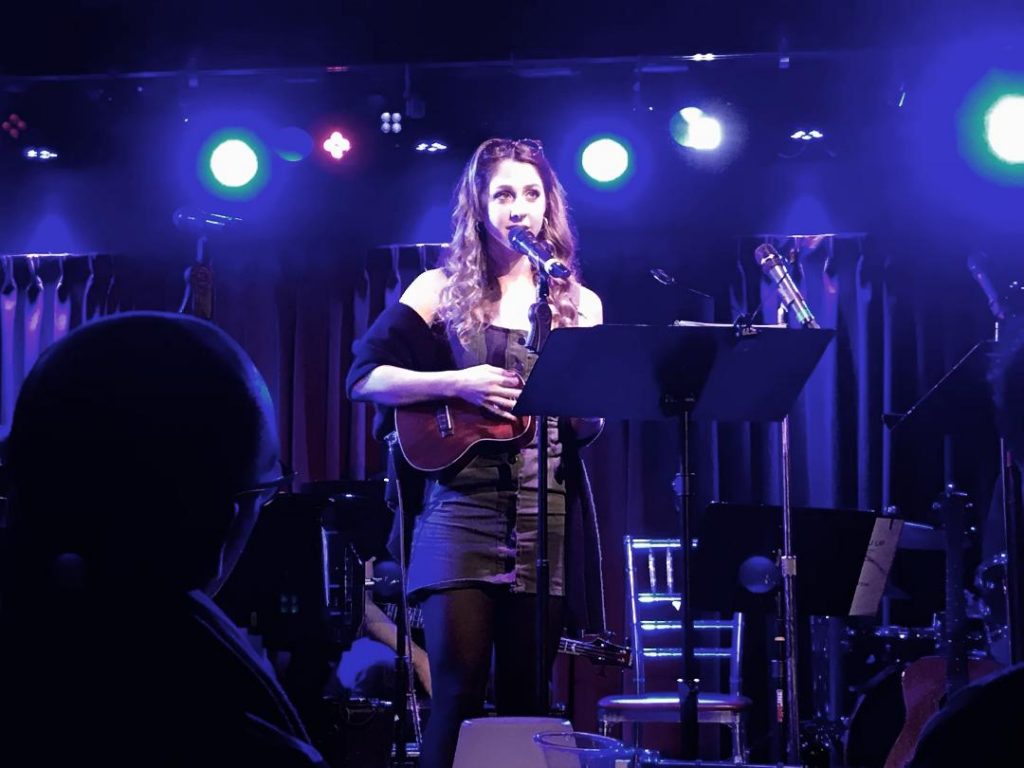 The opening number, “Six Feet Under,” featured all four characters, sung by Jordon Bolde, Kiki DeLohr Helland, Mia Pinero and Steven Raymond. The lyrics of the song are relatable for anyone who has been unsure how to navigate their own lives. My favorite lyric from the show came from this song: “Let’s raise a toast to this world that we really don’t know anything about.” It captured the experience of being young and both excited and anxious about the future.

This musical is filled with gorgeous imagery, demonstrated best in “Paper Cranes,” sung by Marissa O’Donnell and Steve Raymond. Addy and Eli feel a connection after meeting through Jordan, and they end up in Addy’s room, where Eli notices hundreds of paper cranes hanging everywhere. Addy explains that she folds cranes to manage her anxiety. She tells the stories of her cranes and Eli asks her to teach him to fold one, saying, “They’re your paper yesterdays,” a line that stands out to me in a song full of eloquent metaphors.

Music director Heath Saunders played piano beautifully throughout the show and took the mic to perform as Jordan in “Early City.” The combination of Saunders’ vocals mixed with spoken word, an ethereal, echo-y production quality and the poetic nature of the song (often repeating phrases like, “The birds wake you up”) made this the most haunting number of the show and a unique piece of music unlike anything I’ve heard. 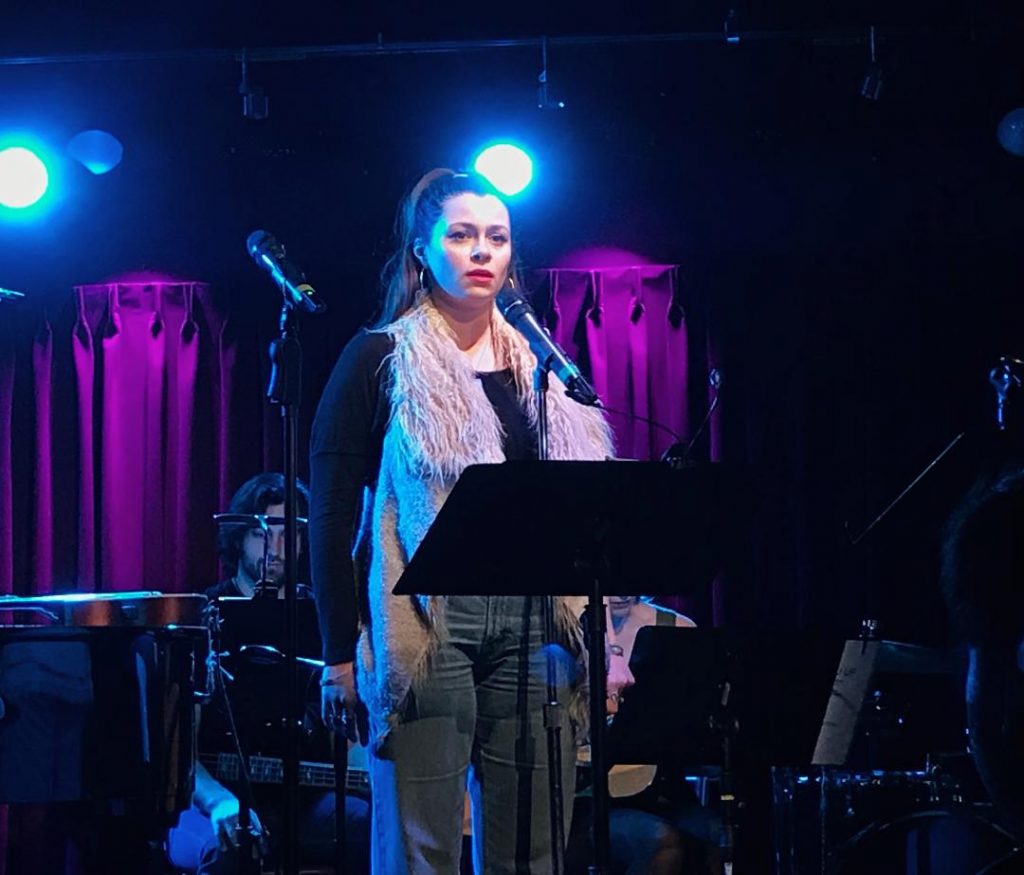 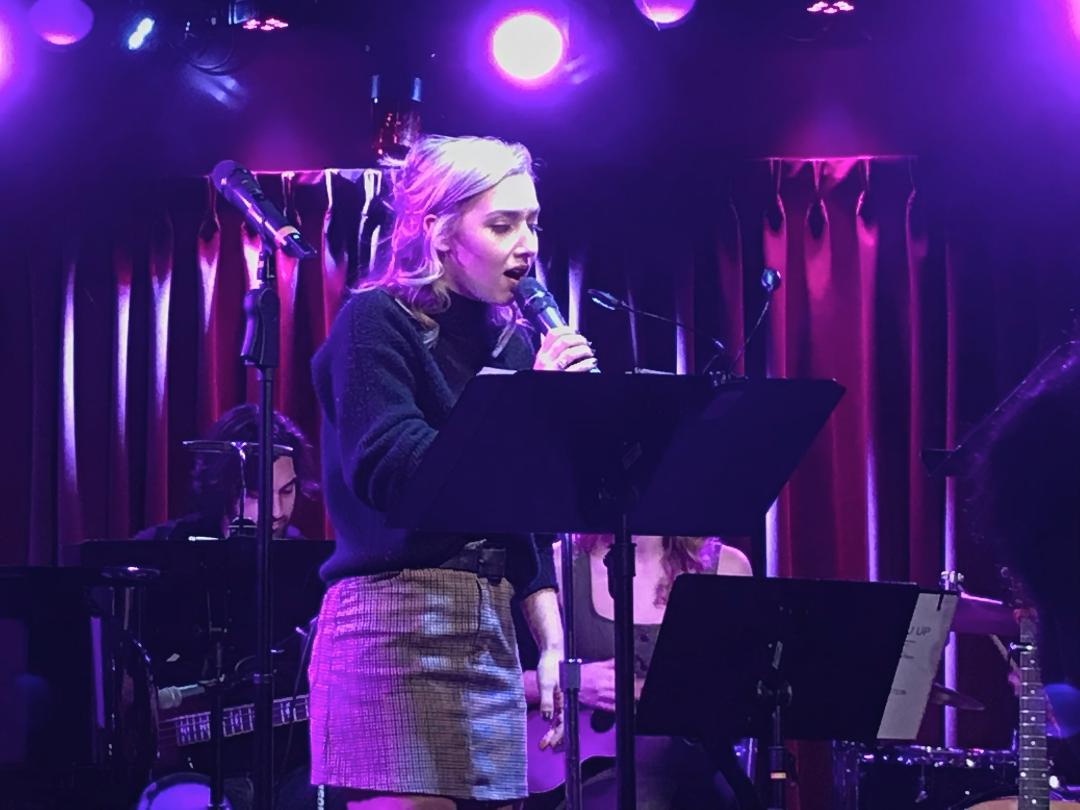 Flynn told us that Pearlstein wrote “God Willing,” a song with a late-90s/early-00s acoustic sound, performed by Paul Pilcz, only one week prior to the concert. Keaton Whittaker sang as Addy on “This” a pop-sounding song that ended up being my favorite melody in the show. Flynn continued the story: Eli is now going through a difficult time following a death in his family. Trent Saunders powerfully captured Eli’s emotions during this hard time in his performance of “Given.”

The musical takes a turn when Eli and Jordan kiss. Jordan also realizes he has romantic feelings for Molly and tries to come to terms with his bisexuality, but cannot admit that he is bi after being shunned from his community when he told them he was gay. He ends up overdosing and lands in the hospital in a medically-induced coma. Brittany Dorazio, singing as Molly, gave one of the most vocally-intense performances of the night on “The Water,” a powerful song that would not sound out of place on the radio. Anthony Norman sang “Bring Me,” at the end of which the band dropped out to leave the ukulele playing on its own, which created an intimacy felt throughout the room. 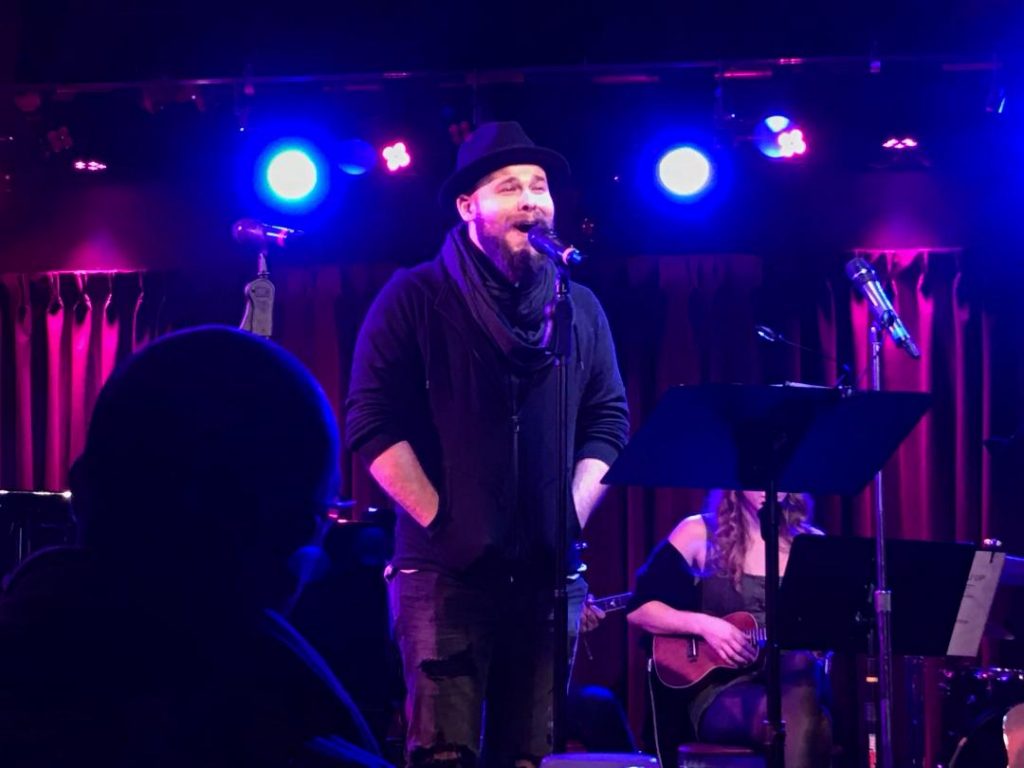 The song that touched me the most was “Born to Love You,” sung by F. Michael Haynie as Eli when Jordan dies. Eli regrets not being there for Jordan and not getting another chance to be close to him, and Haynie portrayed every bit of Eli’s pain to create the most emotionally powerful song of the night. Meanwhile, Addy has a panic attack and vocal powerhouse Natalie Weiss took the stage to sing “Past Life.” The show ended with Pearlstein singing “When The Birds Wake You Up.” With her ukulele to accompany her, her vocals were sweet and the lyrics tied back to Saunders’ earlier performance of “Early City.”

As a young woman who only moved to the city a few years ago, and as someone who has watched loved ones around me struggle with issues like anxiety and being accepted for who they are, the meaning behind this show really resonated with me. I am looking forward to not only seeing what happens with this show because I think that it has potential to reach a larger audience of fans, particularly young people who can relate so strongly to the story, but also to seeing what comes next from the minds of Pearlstein and Flynn, who have created such a timely, relevant musical.