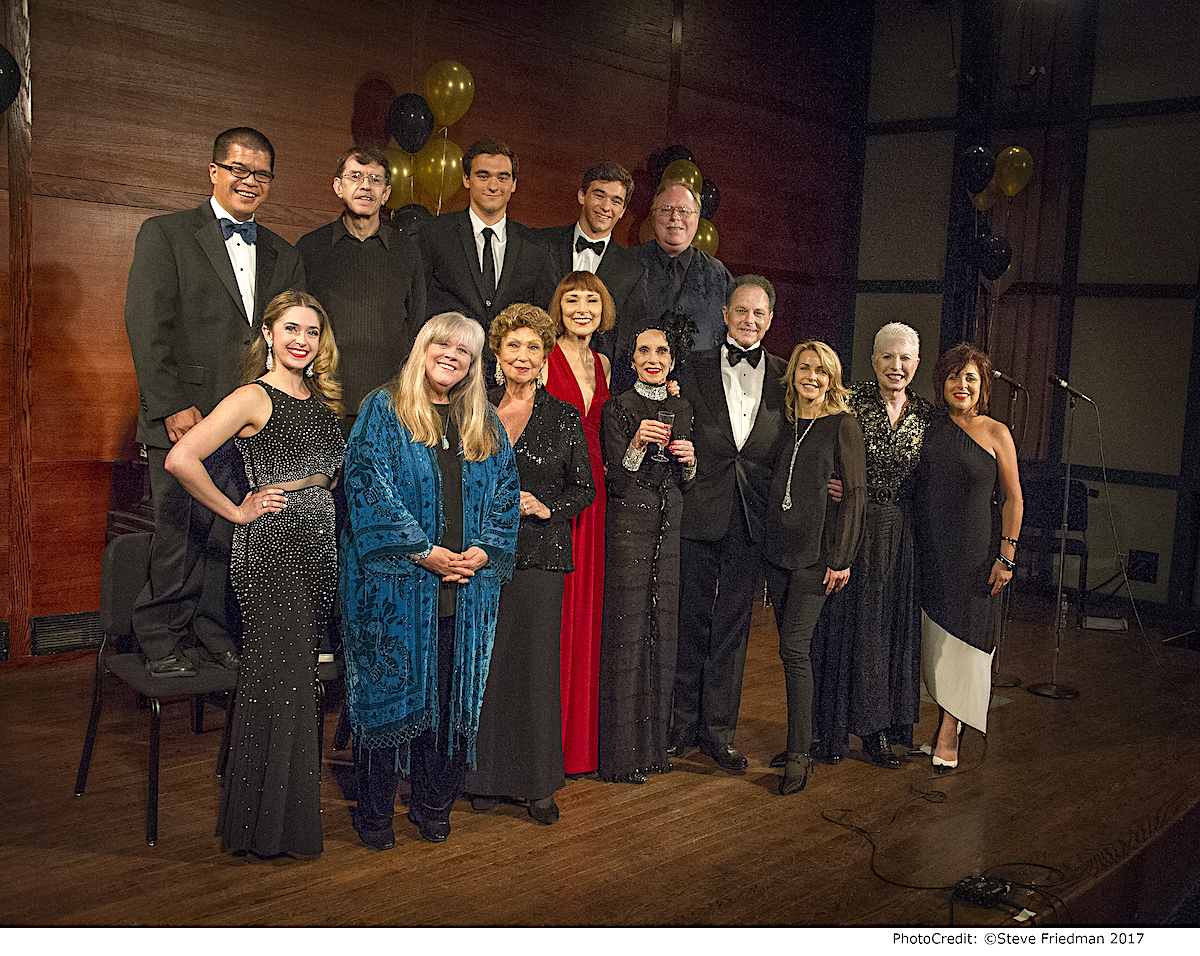 Coincidentally, the last gathering of The Ziegfeld Society, concluding its 2016/17 season, fell on the exact birthday of Walter Willison, host, director and writer of We’ll Take a Glass Together – The Songs of Wright and Forrest from MGM to Grand Hotel. It was a big birthday for the lad born in 1947, and consequently a grand production that caused a spontaneous audience chorus of Happy Birthday to break out just before Willison took the stage. With Music Director Jose C. Simbulan at the piano, Willison launched into several numbers written by Robert Wright and George Forrest, including “A Bag of Popcorn,” “It’s a Blue World,” and the pair’s first big hit, “Donkey Serenade” (lyrics by Wright and Forrest, music by Rudolf Friml and Herbert Stothart), providing a tangible example in song of what it means to be a Broadway star. It was Willison’s birthday wish to be surrounded by glorious ladies he’s worked with and adores, and that wish was made manifest in a bevy of them – with some young male assist from twins John and Matthew Drinkwater. From Kismet (based on the music of Alexander Borodin), Heather Mac Rae, with Willison, performed an entrancing medley of several hits, with a delightful blend of voices, and chemistry to match. Flying in from Los Angeles for the celebration was Lee Horwin, who with her deep, throaty voice slyly emoted the whimsical double entendre song, “I’ve Got a Date with New York,” as well as the wily and droll “Bored.” Also seizing the day with comedic flair was Diane J. Findlay, who with the air of those great British ladies of the stage (Beatrice Lillie comes easily to mind) caused laughter to abound with “Has Madam Had It?” and “Lonely Little G-String,” complete with an elegant, sparkly eponymous prop. Operatic voices prevailed in Marcy DeGonge Manfredi and young talent, Katie Dixon. Manfredi’s many numbers included “And This Is My Beloved” and a more low-key “Willow, Willow, Willow.” Dixon offered “Think Upon Something Beautiful” (from Anastasia: The Musical, based on the music of Sergei Rachmaninoff), with John and Matthew Drinkwater. It was with these powerful voices, however, that the problematic aspect of this production was apparent; sound design was more appropriate for a large auditorium, rather than the small Lang Recital Hall. Consequently, vocals – particularly from the powerfully voiced divas – were often unpleasantly overpowering. Willison had the great pleasure of knowing Wright and Forrest, and his tour through their life and music was informative and engaging, nicely setting up musical segments. His admiration for the duo was palpable, translating into a shared enthusiasm for music that might not necessarily be on the radar of those not expert in musical theater or early film. And so the piece de resistance of We’ll Take a Glass Together was Wright and Forrest’s last work, 1989’s Broadway musical, Grand Hotel. The Drinkwaters opened the segment with a lively “The Grand Waltz.” From the original cast, Karen Akers sang “What You Need”/”Villa on a Hill,” once again proving her amazing and authentic interpretive skills. Lynette Perry offered an affecting “The Flame Girl,” while the irrepressible, grand dame herself, Miss Liliane Montevecchi, in glamorous, slinky black, made the most of “Bonjour, Amour.” During the course of the show there had been a few “moments,” wherein singers went up on lyrics and Music Director Simbulan lost his place. These pros handled it all with aplomb and grace. But it was Montevecchi who in her larger-than-life way got to the heart of it by pronouncing the festivities to be a “musicale.” Indeed, We’ll Take a Glass Together was a festive musicale as well as a very grand party, concluding with the entire cast singing “We’ll Take a Glass Together!” Of course it was for all gathered in celebration to finalize the proceedings by singing another rousing, well-deserved chorus of Happy Birthday.

Executive Producer of the Ziegfeld Society and We’ll Take a Glass Together is Mark York. Stage manager for the production was Mark Lord, with costume supervision by Mitch Bloom, and poster design by Ron Spivak.

We’ll Take a Glass Together – The Songs of Wright and Forrest from MGM to Grand Hotel, June 24 at 3:30 PM