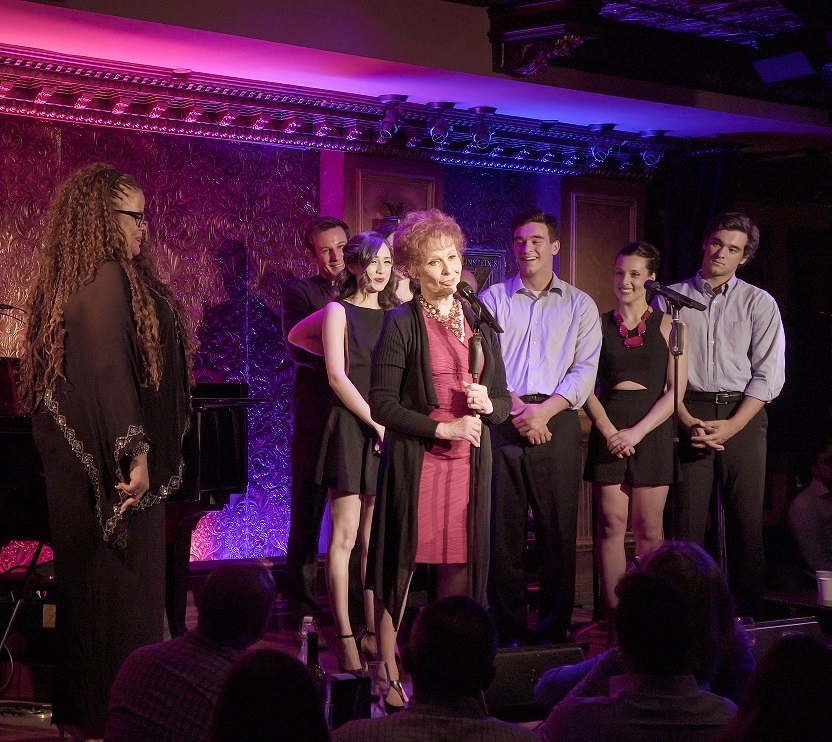 Here’s a sure-fire formula for success: take a groundbreaking musical masterpiece, add an immeasurably talented cast of singers, a skilled music director (Matthew Martin Ward), a genial and informative host, plus a few bells and whistles, and achieve a lollapalooza of a show. From the moment singers Matthew and John Drinkwater opened West Side Story 60th Anniversary Celebration! at Feinstein’s/54 Below, there was no doubt a magical evening lay ahead. The duo’s rendition of “Cool” flowing seamlessly into “Something’s Coming” was an immediate reminder of West Side’s Story’s greatness. The music of Leonard Bernstein, coupled with Stephen Sondheim’s lyrics are nothing short of inspired, transportive, and sheerly supreme.

West Side Story opened 60 years ago to the day of this tribute – on September 26, 1957 at the Winter Garden theater. Featuring a complex yet tuneful rhapsodic score (with operatic elements, and jazz and Latin rhythms), combined with lyrics shocking, witty, cutting and literate, the show forever changed the nature of the American musical. West Side Story was based on Shakespeare’s Romeo and Juliet, and was nearly ten years in development, with shifting story lines and points of view as well as changes in other creative concepts. An intimate look into the making of the show was provided by the original Maria, Carol Lawrence, a surprise guest who took the Feinstein’s/54 Below stage after bows. Lawrence’s “I was there” reminiscences were illuminating and sometimes quite revealing. West Side Story, like no other musical before it, dealt with serious themes previously unknown in the genre, specifically gang violence and racial prejudice. Songs such as “Somewhere,” a profound plea for a different kind of life free from these troubling issues, were hallmarks of the score. “Somewhere” was sung on this evening by Natalie Douglas with great feeling, and superb timing and phrasing, befitting the beauty and depth of the song. Likewise, when near the finale of the show, Anita and Maria sing “A Boy Like That/I Have A Love,” it’s a turning point as they achingly make a case for the transcendent power of love. The number was brilliantly sung by Leah Horowitz and Natalie Storrs, whose intense rendition, in character, was showstopping. The duo’s presentation of the show’s one “happy song,” “I Feel Pretty,” was also squarely on the money. Another power duo, Ashley Marie and Tyler William Milliron, offered “Tonight” and “One Hand, One Heart,” with presence and dynamism. Marie’s sparkling, crystal-clear soprano was rich with dramatic nuance. Milliron possesses one of the most resonant baritones heard of late. He’s full of innate abilities to command his material and anchor himself to it in an act of masterful possession. When he sings “Maria,” the delivery is so authentic you can’t help but believe this name is the most beautiful sound the singer has ever heard. “Maria” is typical of the several hit songs produced by Bernstein and Sondheim. To prove it, a video by Chuck Pennington featured a catalog of singers who’ve recorded the music of West Side Story, in every conceivable way, it seemed. And, of course, Pennington’s video barely scratched the surface of sixty years worth of renditions.

Providing backstory and tidbits of information throughout the evening, producer and host, Michael Portantiere provided “extras,” such as the appearance of Harvey Evans, the first Jet replacement on Broadway, and a member of the Jets in the film version. Evans has been primarily a dancer, pointing up another first for West Side Story. The show was the brainchild of Jerome Robbins, who directed and choreographed (with Peter Genaro). Coupled with a lean book by Arthur Laurents, West Side Story was created to integrate dance liberally with the music and book. Thus, it was the first Broadway musical to use dance – and plenty of it – to dramatically define character and further the action of the plot. A video from a current tour headed by Joey McKneely (guesting and on stage) illustrated how important dance is to the show. At the finale, a prayerful rendition of “Somewhere” by the entire cast was a testament to the enduring legacy of a show that’s as fresh today as it was sixty years ago. West Side Story is an American masterpiece, bar none.