WHAT’S IN THE CARDS? ASI WIND 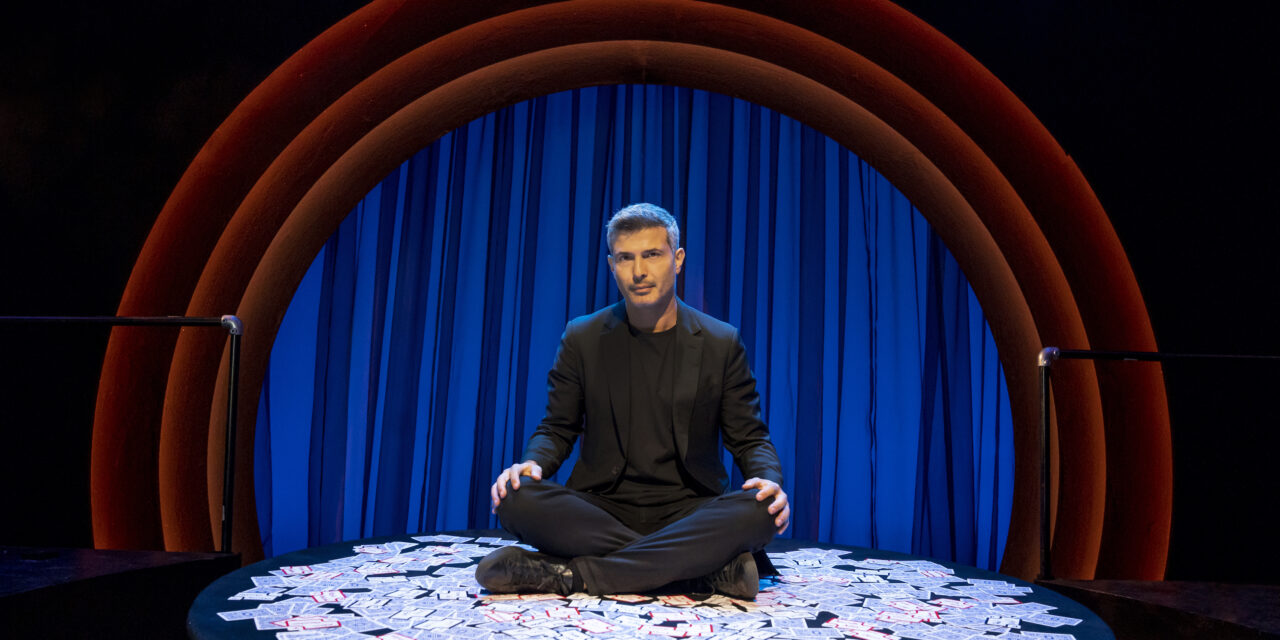 The Inner Circle sits below a spiral of lights at the Gym at Judson.  Somewhere between a happening and a seance, acts of illusion from Asi Wind include a deeper inquiry about what’s in the cards.

Before the show, audience members are asked to write their names on the cards, adding initials on either side.  Red and black, the cards are placed at a table in the inner circle.  When the courageous Asi Wind hints that you must keep the names of all of these people with you, there seems to be something both healing and foreboding about it.  We live with so much risk in America as we temper post-pandemic blues and question causal action, yet issues of state would almost over-burden the Village audience in this quaint location.  To break the warm, cozy ambience, I almost wished for someone to swallow fire or escape from a chained and submersed box.  Instead, there was no casting of daggers, as the breeze wafted in from the busy street hosting chess players and vintage record aficionados.

Generosity about sharing one’s skill and dexterity persists in the 70 minute performance of Asi Wind’s Inner Circle.  Playing cards have a healing quality.  He received ideas from the audience, asking what’s in a name?  If that’s your name, what are the parts of it?  If the parts of it are changed, how?  He further explains his own background.  He was born in Israel.  After age 13, he grew up in Brooklyn and found strength from the magicians that had come before him.  A visual artist, also, he displayed paintings of the great illusionists, like Harry Houdini, among others.

Surrounding him in the Inner Circle are about 10 average people.  As Asi Wind uncovers and reveals the next moment, he seemingly makes names of people in the audience magically appear on the playing cards.  Then, he talks about people’s names and a relationship pattern.  If there is a failed relationship, and half of the name gets taken away, it isn’t always beyond repair.  When Asi Wind performs the illusion of cards seamlessly merging in front of your eyes, the audience applauds.  There is almost a ministering quality, as he walks into the audience to present the merged cards.

Judson, both an arts facility and a spiritual center, has brought audiences to greater realizations for over 120 years, hosting poets, beatniks, and anarchists, so, of course, illusionists and spirit seekers are welcome, too.  Yet, I wished for more risk and spellbinding action.  Without levitation or the death-defying stunts we are accustomed to seeing in a David Blaine production, Asi Wind’s Inner Circle, affirms that you don’t have to reinvent life to breeze forward.

Asi Wind’s Inner Circle is playing at The Gym at Judson, located at 243 Thompson Street in Greenwich Village in New York City.  The show has extended its limited engagement through April 2, 2023.