Where the Mountain Meets the Sea 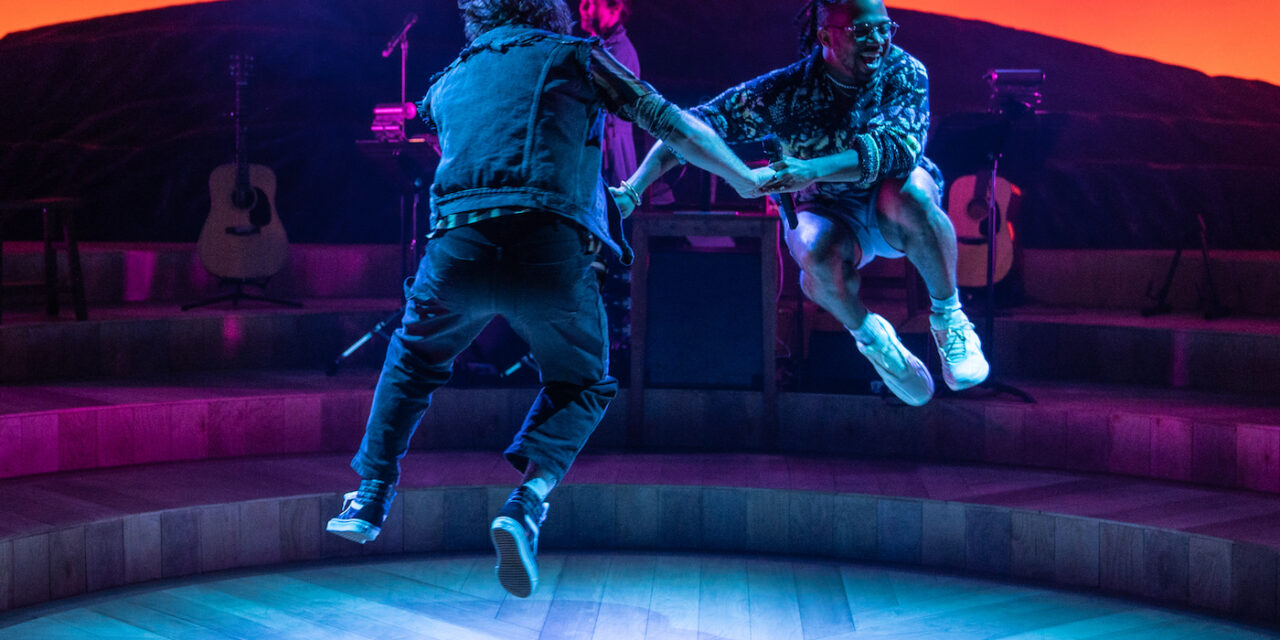 Once again this season, a writer with a gift for language has crafted a play that is essentially a work of literature, gussied up for the stage with creative design, music, and direction. Dialogue and conflict are replaced by first-person monologue and reflection, and, except momentarily, there’s no actual character interaction. As in several other recent works, storytelling trumps dramaturgy, and telling conquers showing. The play in question, Where the Mountain Meets the Sea, by Haitian-American playwright Jeff Augustin (TV’s “The Morning Show”), is a Manhattan Theatre Club production at the City Center Stage I.

Directed by Joshua Kahan Brody, it features two actors and two onstage musicians, the latter forming a Greek chorus of folksy songs vaguely related to the feelings coursing through the story, that of the relationship between a Haitian immigrant father and his American-born son. Memory and sentiment provide the drama; unlike the somewhat similar, but more energetically upbeat My Broken Language at the Signature, the tone and tempo, apart from a few moments (mostly musical), is low-key and contemplative. Well done as it is, and effective as it may be for others, I was never drawn into it and was thankful for its 80-minute brevity.

Arnulfo Maldonado provides a strikingly attractive set of tan, wooden, semicircular risers, exquisitely lit by Stacey Droshier, facing us like a mini-version of a Roman theater’s auditorium. It’s backed by an unusually wide panorama of a low-rising mountain, the vastness of the view expanded by reflective materials at each side that make it seem there are similar mountains stretching into the wings. This is the kind of multi-scenic yet nonspecific play requiring a generalized locale, so the idea of a set that looks more like a performance space than anywhere recognizable has its own kind of logic; it does seem a bit overwhelming, though, for so slight a work of (I hesitate to say it) drama.

Everyone uses mics, even the actors, who walk about the space with handheld ones held close to the mouth, their otherwise welcome amplification occasionally dulling the clarity of words. This device only lessens the dramatic impact by reinforcing the performative rather than lived experience of the story. That story, entwined about themes of family, grief, loneliness, and connecting, begins with Jean (Billy Eugene Jones), a trim, charming, openhearted teacher, in slacks and a long-sleeved, off-white shirt (costumes by Dominique Fawn Hill), who tells of his emigrating, legally, from Haiti to Miami, Florida, in 1979, leaving his girlfriend and mother behind, forever; of getting his first American job, as an airport baggage handler; of adapting to American ways (like Thanksgiving); of going to community college to become a calculus teacher; of his romantic life; of making a cross-country trip to Los Angeles with his pregnant wife, Natalie, another teacher, soon to die; and of his son by her, Jonah, with whom he has a longstanding communication gap.

Intertwined with his story is that told years later by the emotionally guarded Jonah (Chris Myers), gay (and bullied for it since he was four), ponytailed, a mid-30s doctoral candidate in linguistics, in love with an older, married man with ginger hair. Jonah, dressed in a black and white sport shirt, white shorts, and sneakers, lives in California, but must go east—by bus, train, and car—to retrieve his late father’s body and bury it in Haiti. He details the trip, including a Salt Lake City hookup via Grindr. His sexual preoccupations, in fact, seem the most important thing in his life.

That trip is the reverse of the one preceding his birth when his parents went west many years ago; Jonah wants to experience the America through which his parents traveled, although he never knew his mom. Father and son tell the stories of their trips, slowly revealing the difficulty of their relationship and the need for connection, which a gentle, mildly touching musical conclusion brings about. It’s a moment that probably opens wells of feeling for many. I was just happy it was over.

The performances, which also include some moments of dance (choreographed by Steph Paul) are understated and sincere; Mr. Jones using a Haitian accent (which sometimes slips); Mr. Myers speaking so softly he sounds like a late-night disk jockey on 70s WNEW-FM. The Bengsons, who have done theater music before (like The Lucky Ones), sing beautifully—supplemented by their drum work and guitars—and their music is pleasant enough, but it never quite sticks to your memory or makes significant contributions to Augustin’s narrative.

The premise of Where the Mountain Meets the Sea makes it likely that there ain’t no mountain high enough to make it into drama. It is what it is, and, for me, that wasn’t high enough.

Where the Mountain Meets the Sea. Through November 27 at Manhattan Theatre Club’s City Center Stage I (131 West 55th Street, between Sixth and Seventh Avenues). www.manhattantheatreclub.com