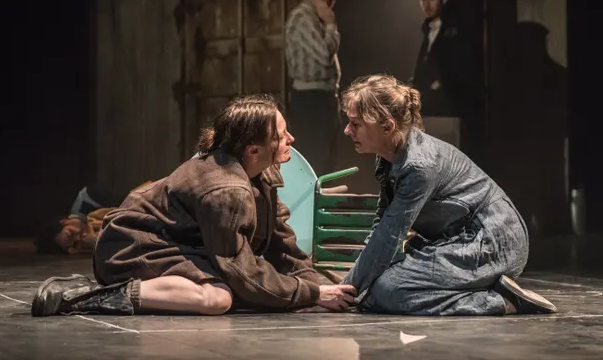 In London theatre this season, women reign supreme. Whether they’re playing duchesses or demons, spirits or sisters, matriarchs or maidens, they project images of power, courage, and resilience.

At the Royal National Theatre, actresses Niamh Cusack and Catherine McCormack command the immense Olivier stage for over five hours, in April De Angelis’s adaptation of My Brilliant Friend, Elena Ferrante’s epic Neapolitan quartet.   They play Lenù and Lila, two friends from the slums of Naples bonded since childhood. We follow their friendship through five decades, as they come of age and face the overwhelming challenges forced upon them by a violent and cruel patriarchal society. Enduring economic hardship, physical abuse, failed marriages, and loss of children, their parallel journeys end triumphantly for one and tragically for another. It’s a deeply moving feminist tale of endurance and perseverance staged masterfully by Melly Still, who directs a mighty company of 24 actors playing dozens of roles on the vast stage, with movable staircases designed by Soutra Gilmour. (Note: it’s an all-female artistic team – writer, adaptor, rector, designer). 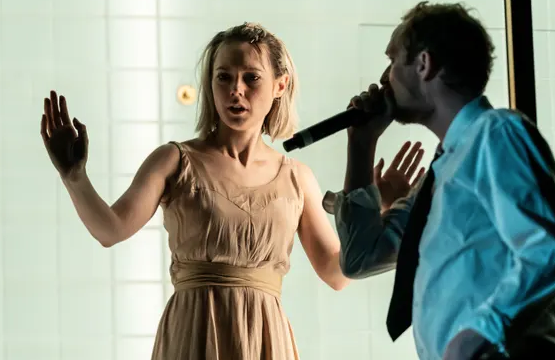 Meanwhile, director Rebecca Frecknall at the Almeida Theatre jolts us with an arresting production of the Duchess of Malfi, John Webster’s 1613 Jacobean tragedy.   In this contemporized version (set in a glass palace designed by Chloe Lamford), Lydia Wilson gives a charismatic performance as the fiercely independent-minded Duchess who is murdered by her scheming brothers for daring to manage her own affairs and marry her steward, the man she loves.   Director Frecknall rights this terrible wrong by having the phantoms of the duchess plus two other victimized women return to preside over the terrible punishment of their murderers.   This formidable trio of wronged women look down on the blood-soaked debacle from their glass palace with a stony, prophetic resolve that rivals Macbeth’s witches, as if to warn future patriarchal generations to come. In Frecknall’s feminist version, finally, it’s the Duchess’s daughter (not the son) who inherits the family’s fortune. 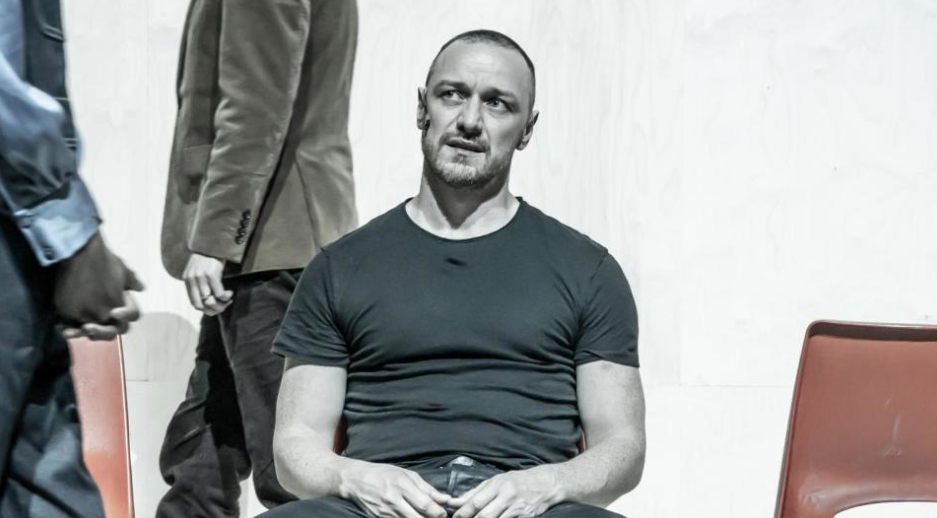 As for other charismatic female figures, it would be hard to upstage the fabulous James McAvoy in Cyrano de Bergerac, Martin Crimp’s sensational updating of Edmond Rostand’s classic. But Anita-Joy Uwajeh holds her own as a commanding Roxanne, whose response to Cyrano’s poetry elevates love to an exalted, ethereal level. Jamie Lloyd’s raw, urban production at the Playhouse Theatre is the “Hamilton-sized hit” of London’s winter season, with a fierce company of 18 retelling the story on a bare stage in rap – Crimp’s uniquely inspired version of Rostand’s original verse.   It’s rough contemporary theatre, and it’s electrifying. 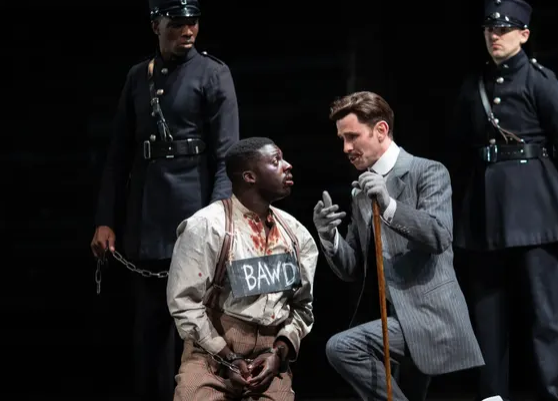 Equally formidable is Isabella, the beloved heroine of Shakespeare’s Measure for Measure, in the Royal Shakespeare Company’s stately revival at the Barbican Centre. As played by the luminous Lucy Phelps, the novice nun is a towering strength of virtue in yet another punishing patriarchal system – wherein she is blackmailed into forfeiting her virginity to Angelo, the presiding ruler of Vienna, in return for sparing her brother’s life. Isabella resists and triumphs – and director Gregory Doran rewards her accordingly, by updating the play’s end so that she (not the Duke) has the final say over whether she’ll marry or not. 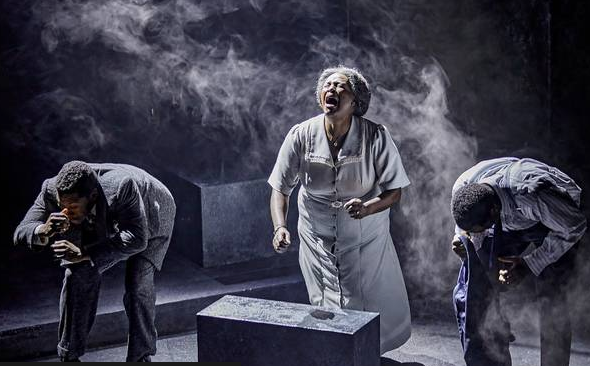 I’ve never seen a Death of a Salesman in which the passive, oppressed Linda Loman is a more dominant figure than her husband Willy. But in Marianne Elliott’s deeply moving revival of Arthur Miller’s classic at the Piccadilly Theatre, featuring an all-black cast and musical accompaniment, the formidable Sharon D. Clarke is a towering pillar of strength throughout this family tragedy. Her endurance and resolve echoes that of Mama Lena in Lorraine Hansberry’s A Raisin in the Sun, and Linda’s speech at Willy’s graveside reinforces the feminist notion of the matriarch as the backbone of the American family. 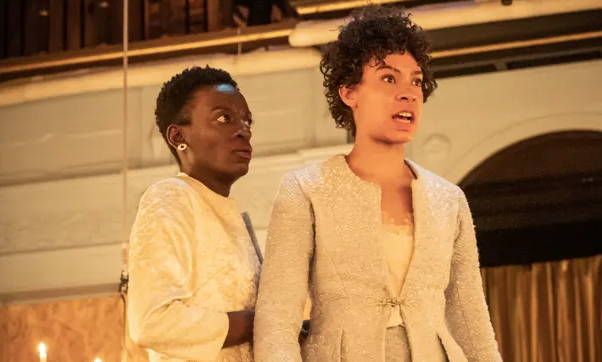 As for other powerful women on the stage this season, directors Sean Holmes and Ilinca Radulian take this feminist trend to the extreme. In their wickedly provocative production of Richard III in the Globe’s jewel-box Wanamaker theatre, Shakespeare’s demonic title character is played by British actress Sophie Russell. (Note: Russell plays the role with no deformity.) Russell’s rise to power is played as belligerent black comedy, and she’s a marvelous villain. Russell is pushed to an absurdist extreme by her directors, who dress her in white period costumes ranging from Elizabethan to Elvis, and have her sing “Lay Your Head Upon My Shoulder” after each murder. Meanwhile, I kept on thinking that Queen Margaret (played by Steffan Donnelly, in another gender switch) afforded the directors a missed opportunity to exchange roles with Richard (just for fun). 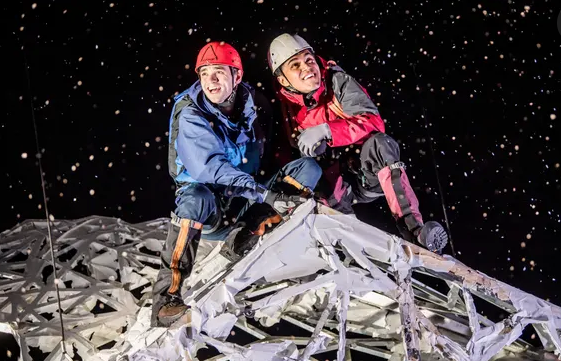 The final female role I’ll mention may not be a dominant one – but an inspiring and a memorable one. In, Touching the Void, the thrilling stage adaptation of Joe Simpson’s mountain-climbing memoir at the Duke of York’s Theatre, author David Greig adds the character of Sarah, Simpson’s sister (played heroically by Fiona Hampton). After Simpson’s devastating fall while climbing in the Andes where he was left to die, Sarah becomes his ghost-like spiritual guide who leads him, crawling miles with a broken leg through snow and ice, on an Orpheus-like journey back from the dead. The production, directed by Tom Morris with a stunning design by Ti Green, is spellbinding – and Simpson (who approved the adapter’s reimagining of Sarah) said that his late sister would have been honored to know the spiritual role she plays in saving her brother, in this retelling of an incredible story. 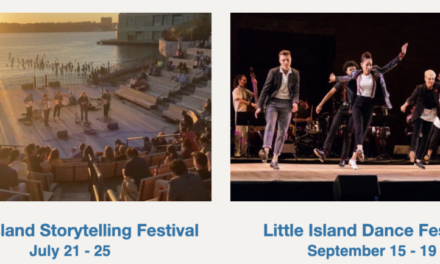 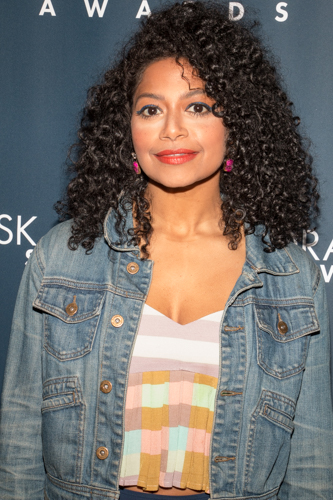 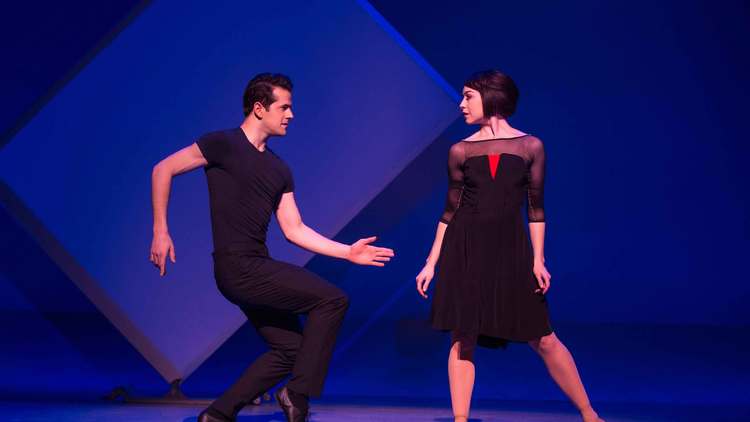