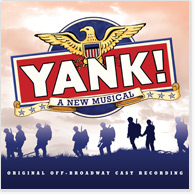 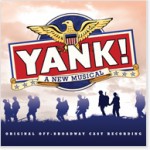 The York Theatre Company (James Morgan, Producing Artistic Director; Andrew Levine, Executive Director) will welcome cast members of the original Off-Broadway production of the critically acclaimed musical, Yank!, with book & lyrics by David Zellnik and music by Joe Zellnik, to celebrate the official release of the cast recording on Monday evening, February 24 from 7:00 p.m. – 9:00 p.m. at The York Theatre Company’s home at Saint Peter’s (entrance on East 54th Street, just east of Lexington Avenue).  The celebration will be held on stage at The York Theatre, whereYank! received its world premiere and played a sold-out engagement in Spring 2010.

Yank! is a love song to Hollywood’s “it takes one of every kind” platoon flicks and to 1940’s Broadway. The show tells the story of Stu, a scared Midwestern kid who becomes a reporter for (the real) Army magazine Yank, faces his fear in battle, and perhaps even scarier for him, finds love with a fellow soldier named Mitch. With a lively score inspired by the theatre and pop sounds of the 1940’s, the show captures the spirit and exuberance of the World War II era even as it explores questions of prejudice, courage and survival.   Yank! enjoyed critical and popular success during its twice-extended run at the York Theatre Company in 2010, receiving seven Drama Desk nominations, three Outer Critics’ Circle nominations, and two Lucille Lortel nominations — all including Best Musical.

The release party will give the cast and creative team an opportunity to celebrate with some of the hundreds of small donors who contributed to Yank!‘s successful Kickstarter campaign this past summer.  Without the overwhelming and immediate support from its fans, the long-delayed cast album never would have been a reality.

All new ten-piece orchestrations were created just for the recording by Tony, Academy, Grammy and Emmy Award-winning orchestrator Jonathan Tunick (Follies, A Little Night Music, Sweeney Todd, Company, Nine, Titanic, Pacific Overtures, Into the Woods A Catered Affair, Promises, Promises, A Gentleman’s Guide to Love and Murder). The Music Director was Rob Berman, (Encores!) who has been a part of theYank! family since its premiere at the New York Musical Theatre Festival in 2005.

Advance copies of the album will be available for purchase during the festivities. The album can also be pre-ordered at the PS Classic’s website (www.psclassics.com) and on Amazon.com (http://www.amazon.com/Yank-Original-Recording-Bobby-Steggert/dp/B00GXD6UNO).