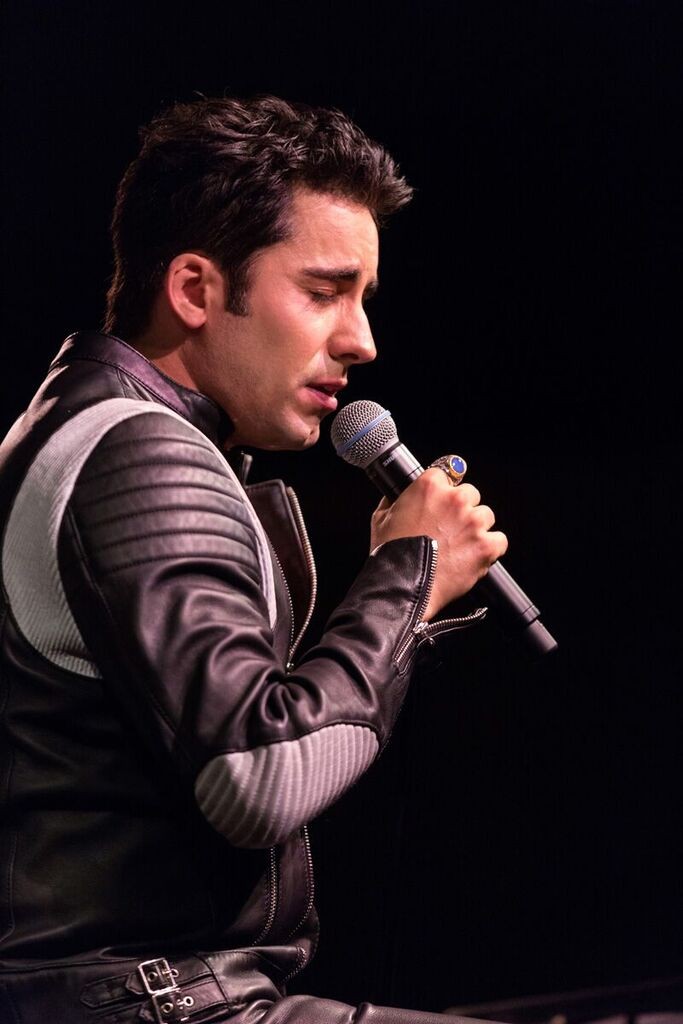 by: Linda Amiel Burns
John Lloyd Young, the Tony Award Winner, who originated the role of Frankie Valli in both the Broadway Show and the movie Jersey Boys, opened at the Cafe Carlyle last night for a run from February 9 to 20th with an all new show titled “Yours Truly.” This is John’s 4th time at this prestigious venue and it is obvious after viewing his show, why he made history by being the only American actor to win all four major leading actor honors in a Broadway debut: the Tony, Drama Desk, Outer Critics Circle and Theatre World Awards.

John’s musical selections were varied with many lushly romantic 60’s-era R & B ballads that showed off his beautiful high tenor voice that easily transitions into a thrilling falsetto when called for.  John opened the show with “Stardust” (Carmichael & Parrish) and then sang a soulful “My Prayer” (Boulanger & Kennedy). Other songs from the 60’s was “Hurt So Bad” (Hart, Randazzo & Weinstein), and a song that was written in 1969 but not released until 2000 by Roy Orbison, “Say No More.” John put his own spin on the classic Smokey Robinson “Ooo Baby, Baby” and even sang a song in Mandarin “Ming Ri Tian Ya” translated means “If Tomorrow Comes.”

John mentioned that he performed in Jersey Boys over 1300 times and the show really came to life when John sang two songs from that show that the audience seemed to be waiting for, “Can’t Take My Eyes Off of You” (Crewe & Gaudio) and Bob Gaudio’s popular “Sherry.” I saw many people in the elegant Café Carlyle audience dancing in their seats to these tunes. Another highlight of the evening was his wonderful rendition of North & Zaret’s “Unchained Melody” that received John’s own musical stamp.
Also included in the show were some new songwriting collaborations with his long time musical director, Tommy Faragher who accompanied him on piano and keyboards. The other fine musicians in the band were John Putnam on acoustic and electric guitar, Paul Socolow on bass and Sam Merrick on drums.

John performed a dramatic “Alone Together’ and another fine song just completed in 2016 called “Slow Dawn Calling.” It was easy to see that this versatile young singer has a talent for composing and that he and Tommy have inspired each other musically.
In 2013 John was appointed by Barack Obama to the President’s Committee on the Arts and Humanities, and has been performing for the past 10 years in many iconic venues including Carnegie Hall, Lincoln Center and Radio City Music Hall. He is an experienced entertainer who is comfortable on the stage, easily joking with his audience. As a matter of fact, he dedicated “Maybe I’m Amazed” by Paul McCartney to his audience and devoted fans that continue to support him. The closing song was Bob Dylan’s “To Make You Feel My Love” and it was obvious that the opening night crowd did feel the love as they gave this extraordinary singer a standing ovation!

Reservations can be made by phone 212 744-1600 and for more info, visit http://www.rosewoodhotels.com/en/the-carlyle-new-york/dining/cafe-carlyle.
For more info on John Lloyd Young – Visit: www.JohnLloydYoung.com