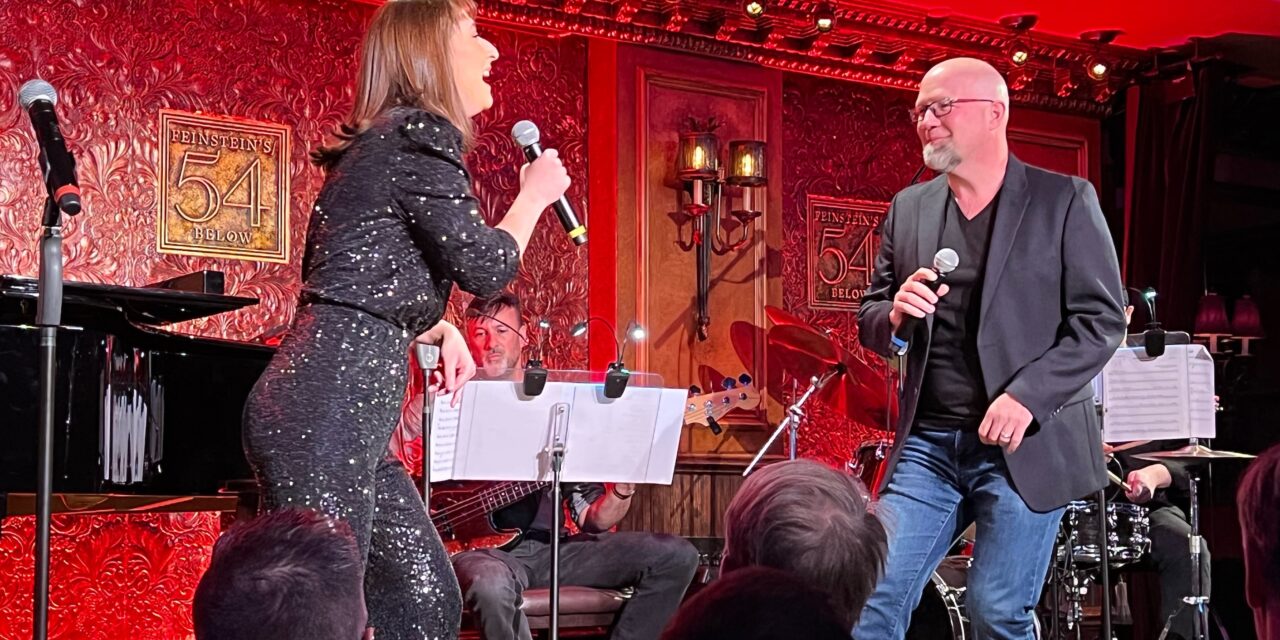 Monday evening, for one performance only, Feinstein’s/54 Below presented an extra special night in its popular “54 Sings!” series, which has been going on as long as its doors have been open. Often framed around a single subject (“54 Sings Mame,” “54 Sings Elton John,” etc.) they offer opportunities for an eclectic variety of singers and song. And with themes being entirely the point, last night was ultra-refreshing for not having a theme at all. In other words, how often do you get the chance to hear “Gooch’s Song” by Jerry Herman on the same bill as David Bowie’s “Ground Control to Major Tom?”

The show is the brainchild of producer/host/singer Scott Coulter, who has been the leading light behind most of these salutes for the past decade. For this 10th anniversary concert, he gathered cherished friends and threw the whole thing into a sort of musical blender, mixing everything from pop to Broadway, from Streisand to The Beatles, and both soft and hard rock. In the capable hands of a baker’s dozen singers (not including Coulter himself) the night was swift, fun and energetic.

Coulter started things off belting out Cher’s anthem “If I Could Turn Back Time,” which then segued into a well-sung performance of Huey Lewis’s “Back in Time” from Tyce Green, currently on a national tour as the title role in Jesus Christ Superstar. This led to reminiscences about the last ten years of these kinds of “54 Sings!” shows with Coulter as expert guide regaling the audience with funny stories of both triumphs and mishaps. From there we had covers of famous recordings by Streisand (Kelli Rabke) and Tina Turner (Carole J. Bufford and Alex Getlin), providing unique takes into well-proven territory. Bufford’s dress nearly stole her singing of “Honky Tonk Blues,” which really raised the rafters. Then Getlin raised it even higher with “River Deep, Mountain High,” which is—simply stated—one of the greatest rock songs ever written (by Ms. Turner herself, even if Ike made sure his name was on it).

Broadway musical giants such as Andrew Lloyd Webber and John Kander and Fred Ebb were given loving treatment by Brian Charles Rooney, with a stunning “Music of the Night,” and Klea Blackhurst with a frenetically funny “Chief Cook and Bottle Washer” from The Rink. Paul McCartney (without John Lennon’s aid) was represented with songs from Lorinda Lisitza and Devin L. Roberts (“Maybe I’m Amazed” and “I Love You,” respectively. And, as already mentioned, David Bowie was channeled with authority and deft showmanship by Aaron David Gleason (dynamic and brash) and Michael T (glam and fabulous).

And even if it was a reach outside the natural flow of these songs, I got a kick out of Lucia Spina’s traditional take on the anything-but-traditional “Gooch’s Song” from Mame, in all its delightful and operatic silliness.

Anthony Murphy sang an impressive “I’m Still Standing” by Elton John, who was also embodied by Alex Getlin, returning late in the show and duetting with Coulter a la Elton and George Michael on “Don’t Let the Sun Go Down on Me.” A great way to end the evening.

The band led by John Fisher, with Max Sharfglass on bass and Larry Lelli on drums, managed to sound bigger than they with only three instruments. Hat’s off.

There are more “54 Sings!” events on the Feinstein’s/54 Below schedule, continuing the ten-year celebration throughout the month of May. If they’re as improvisatory and as much fun as this one, there are further treats to be had. You can check out their calendar by going to: https://54below.com/calendar/?month=April+2022.