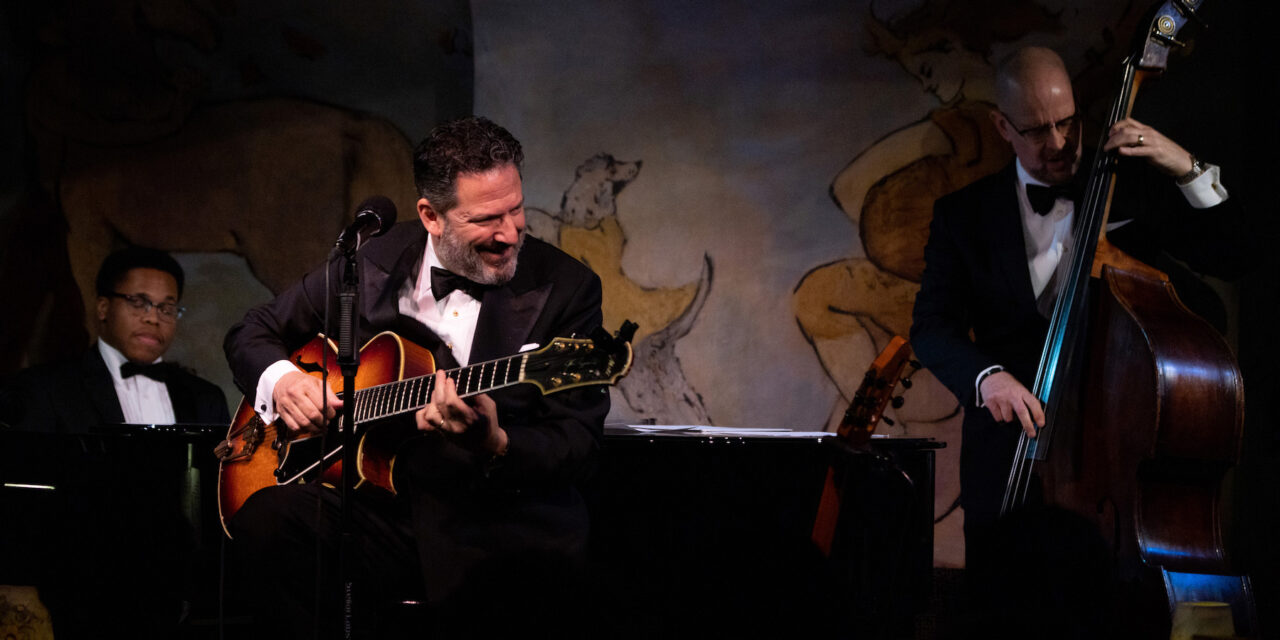 Guitarist-vocalist John Pizzarelli, like many performers who endured the drought of live engagements during the two-year pandemic lockdown, is finally back live in a venue that suits him to the proverbial “T,” the newly re-opened Café Carlyle. It’s an intimate space that’s also extremely comfortable to be in, helping ensure a flow of reciprocally high energy between audience and performer. That energy was flowing liberally with Pizzarelli and his trio, Isiah J. Thompson on piano and Mike Karr on string bass. Pizzarelli gave a “better-than-ever” performance, breezing handily through a new show entitled, Stage & Screen, songs from Broadway and film through the years.

The term “triple threat” is one well-known about stage entertainers, meaning the individual can sing, dance and act with equal skill. Pizzerelli is also a bona fide triple threat in another way. He’s a virtuoso on the guitar, sings with a pleasant vocal tone and is a humorist/raconteur of great wit and sublime irony. If you throw in interpretive skills when it comes to lyric, he’s also very much a quadruple threat. At the top of the set “How About You” (Burton Lane, Ralph Freed, 1941 Babes on Broadway) and “Rhode Island Is Famous For You” (Howard Dietz, Arthur Schwartz, 1948Inside USA) solidly established all four facets of this master of all. Humor-wise, for example, a hilarious story about one of Benny Goodman’s small group endeavors involving saxophonist Zoot Sims and Bucky Pizzarelli, wonderfully set up “Too Close for Comfort,” written by Jerry Bock, George David Weiss and Larry Holofcener in 1956 for Mr. Wonderful.

Personal reminiscences about his own experience, as well as other memories of father Bucky (who died in April 2020 at age 94), were especially delightful, adding zest to the musical selections. Pizzarelli revealed his first trio gig was 31 years ago at the now closed and very much lamented Oak Room in the Algonquin Hotel. He also spoke of good times in Michael’s Pub, a long-closed midtown jazz venue, in the late 1970s and early1980s. Among homages to Bucky were some subtle tributes, unspoken. Picking up the classical guitar, which produces a particularly mellow sound, he played a solo of Bucky’s arrangement of “Where or When” (Richard Rodgers, Lorenz Hart, 1937 Babes in Arms). With Karr playing melodic lines within the rhythm, the harmony produced by these two instruments together underscored the wistful, even haunting quality of the song.

A high point (of many) in the set was the slow, ballad tempo of “As Time Goes By” (Herman Hupfeld, 1931 Casablanca) with the almost never heard verse—a real treat. For demonstrations of incredible technique, a speed-driven uptempo “I Want to Be Happy” (Vincent Youmans, Irving Caesar, 1925, No, No, Nanette) demonstrated the almost super-human flexibility of Pizzarelli’s playing, with a series of subtle tempo changes in a classic jazz attack of melodic lines with excellent runs of improvisation. Another iteration of this dynamic came with the closer, “Coffee in a Cardboard Cup” (John Kander, Fred Ebb, 1971 70, Girls, 70). This tune is a fun song, with Pizzarelli and company making the most of it. Although he hadn’t been doing it much during the set, Pizzarelli let loose with a goodly sample of scat, which generally includes his ability to intuitively harmonize his scatting with his playing.

One of the elements that elevates a performance is in the perception that the performer is having a good time—perhaps even communicating a strong sense of absolutely not wanting to be anywhere else in that very moment. This, Pizzarelli does with ease and in a very personal way. That quality and sheer talent makes time fly and endings come all too quickly. But the encore was a stunner. Duke Ellington, throughout his life, was often asked (and sometimes criticized) about not taking a stance about racism. His sincere answer was always, “everything I have to say is in my music.” Likewise, in the troubled world we now inhabit, amid house lights down, Pizzarelli offered his statement (on the classical guitar)—a soft, evocative solo of South Pacific’s (Richard Rodger, Oscar Hammerstein III, 1949) “You’ve Got to Be Carefully Taught.” You could have heard the proverbial pin drop. The song was the perfect coda for a glorious night of music by the highly engaging and wonderfully talented John Pizzarelli Trio.

The John Pizzarelli Trio plays at the Cafe Carlyle through May 7. For more information and to reserve a table, go to https://www.exploretock.com/cafecarlyle.