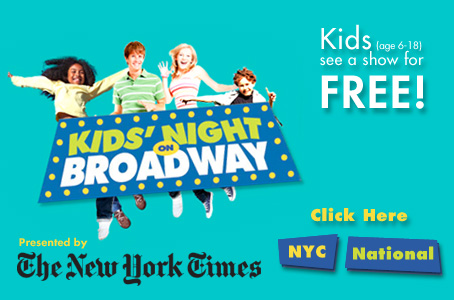 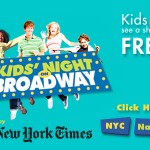 The Broadway League announced today the shows participating in the 18th KIDS’ NIGHT ON BROADWAY, which will take place Monday, February 24, 2014 to Sunday, March 2, 2014. Tickets to participating shows will be available to the public starting Wednesday, January 8, 2014 at 10 a.m. ET.

Participating shows* (to date) include:

(*subject to change, and some shows not available for all performances)

Participating restaurants (to date) include:

KIDS’ NIGHT ON BROADWAY®, a program of The Broadway League, is generously presented by The New York Times and is officially sponsored by WABC-TV, and Official kids’ media partner, KidzVuz. Media partners are Z100, Telemundo Nueva York, and Metro-North Railroad. Additional support is provided by Madame Tussauds New York and Schmackary’s, the official cookie of Kids’ Night.