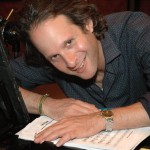 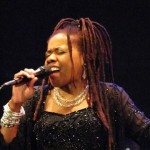 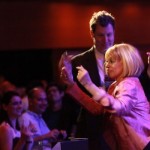 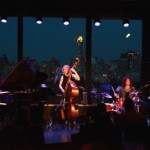 Jazz Heroes for the Holidays At Dizzy’s Club Coca Cola

One of the most consistent aspects of an Eli Yamin performance is Eli himself: his enthusiasm and love of the music is palpable and infectious. It’s plain to see that Eli really, really loves jazz. His high spirits can’t help but radiate to his sidemen and to his audience. Yamin’s classically trained piano sound, laced with strong influences of the blues define his own integrated style: much of Yamin’s work is blues-infused, since, as he says, the blues are inherently part of jazz.

In the first set of a four-set gig at Dizzy’s Club Coca Cola (at Jazz at Lincoln Center) on December 17 and 18, The Yamin trio began with a spirited, straight ahead jazz version of Fat’s Waller’s 1929 tune Honeysuckle Rose. The Waller standard provided ample opportunity for Yamin, plus internationally renowned bassist Nicki Parrot, and composer, teacher, drummer LaFrae Sci to strut their stuff before being joined by New Orleans-based clarinetist Evan Christopher.

When Yamin and Christopher first met, Eli reports, they immediately clicked as people; working together became a given. One result of their collaboration is the CD, Louie’s Dream, recorded in November 2012, with original music as well as standards. Many tracks from the CD, dedicated to “our jazz heroes,” were well represented at this Dizzy’s outing. These tunes included Louis Armstrong and Marty Napoleon’s eponymous composition Louie’s Dream, along with Christopher’s composition, You Gotta Treat It Gentle, at the top of the set. You Gotta Treat It Gentle, a tribute to jazz pioneer, Sidney Bechet, showcased Christopher’s style of “contemporary early-jazz.” His clear, sure, sweet intonations echo and broaden the musical vocabulary created by Bechet and other innovating New Orleans clarinetists such as Bechet’s mentor, Lorenzo Tio, Jr., and the famed Duke Ellington clarinet player, Barney Bigard.

Ellington was well-represented during the set, with the group’s third number, a free-ranging rendition of the 1928 classic, The Mooch. (originally a showcase for trumpeter Bubber Miley as well as Bigard). Backed by rhythm, Christopher handled the famous opening bars of the tune, written for three clarinets, with encompassing musical authority. Later into the set, jazz singer Catherine Russell sang a bluesy, soulful rendition of Ellington’s 1930 hit, Mood Indigo, whose main theme was developed by Bigard (based on a riff he learned from Lorenzo Tio). Mood Indigo is most commonly played as an instrumental (with Ellington’s work, vocalese prevailed:  words came later to suit the tune). Russell’s vocal interpretation of this classic was an especial treat to hear. After a sly, up-tempo musical intro to the doleful main themes of the piece, Russell took command of the lyrics with a low-down blues attitude worthy of the original interpreter of the song, Ellington’s favorite girl singer, Ivie Anderson.

The third Ellington tune of the evening was Duke’s 1945 up-tempo confection, Dancer’s In Love, with it’s stop-time interlude for finger retorts. Mercedes Ellington, Duke’s granddaughter (a dancer, choreographer, producer, and founder of The Duke Ellington Center for the Arts) was on hand to lend a hand – called up from the audience to lead the snap, snap, snap.

Catherine Russell’s vocals were featured in the second half of the Jazz Heroes for the Holidays set. When Russell took the stage with Let the Good Times Roll, the 1946 jump blues tune by Sam Theard, there was no question about good times rolling on. Born into jazz, (her father, Luis Russell, was a pianist/bandleader/arranger/composer, and Louis Armstrong’s long-time musical director; her mother is the late bassist/guitarist/vocalist, Carline Ray). Russell sings with strong, pure, assured tones. Her interpretive skills demonstrate a mastery beyond blues and jazz, such as the two seasonal favorites sung in this set, the 1945 Sammy Cahn-Jule Styne, Let It Snow, and Silver Bells, written by Jay Livingston and Ray Evans in 1950.

Eli Yamin is, besides a pianist, composer, singer and producer, an educator.  He’s the head instructor of the Middle School Jazz Academy at Jazz at Lincoln Center, and the artistic director of the Jazz Drama Program. In this latter capacity he developed Holding the Torch for Liberty, a jazz musical about the culmination of the women’s suffrage movement in the United States, circa 1920. It’s The Way That You Talk from the musical was sung by Russell with a deep appreciation of its stylistic heritage: a W.C. Handy-type New Orleans second line parade.

Let His Love Take Me Higher, written by Yamin and Christopher, and featured on the Louie’s Dream CD, is a spiritual, a tribute to the great “queen of gospel,” Mahalia Jackson. While Jackson possessed a powerful contralto, Russell’s higher tonal range nonetheless approached the great Mahalia’s vocal authority with stirring assuredness and authenticity.

Catherine Russell is also a master at working in sync with instrumentalists. Together, Yamin’s trio, Christopher, and Russell proved a well-integrated, seamless musical whole (especially pleasing were several musical interludes when Christopher’s smoky clarinet and Russell’s dusky vocals combined in a pitch-perfect unity). Their gig, with its abundance of musical inspiration, was a magnificent, good-time holiday treat. http://jalc.org/dizzys