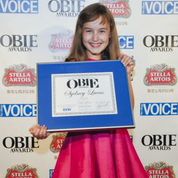 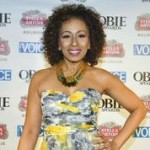 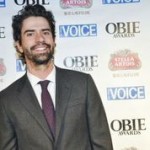 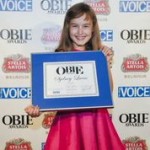 Highlights of the 2014 included the Lifetime Achievement Award presentd to Estelle Parsons, 86, for her extraordinary multifaceted life in the theater. Sydney Lucas, 10, became the youngest recipient in the history of the Obies. The show FUN HOME was also honored by the Obies with awards for author Lisa Kron, composer Jeanine Tesori and director Sam Gold. 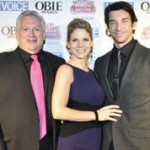 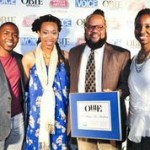 Kelli O’Hara presented 2014 Obie Award for Lifetime Achievement to Estelle Parsons.
In 1968, Estelle Parsons, then an Obie recipient for distinguished performance, presented an Obie for “best actor” to a newcomer for his performance in “The Indian Wants The Bronx.” The actor sent this heartfelt message that was read to Ms. Parsons at the ceremony by Andy Karl:

Hello Everyone,
I am sadly unable to attend tonight’s ceremony so speaking as the invisible man I say to you, Estelle is a guiding light, she is a force and a genius actor. We have spent years together working, acting, directing and engaging in all the variables of putting on a play. It’s a relationship that I hold very deeply in my heart and one that has given me much joy and insight. Congratulations on getting the OBIE award for Lifetime Achievement, it’s a great honor and endures, and you endure. Thank God you do. I love you Estelle and in writing this it at least gives me a chance to feel a little like I was there with you tonight, I sure wish I was. AL PACINO

The Obie for Best New American Play was awarded to playwright Branden Jacobs-Jenkins.