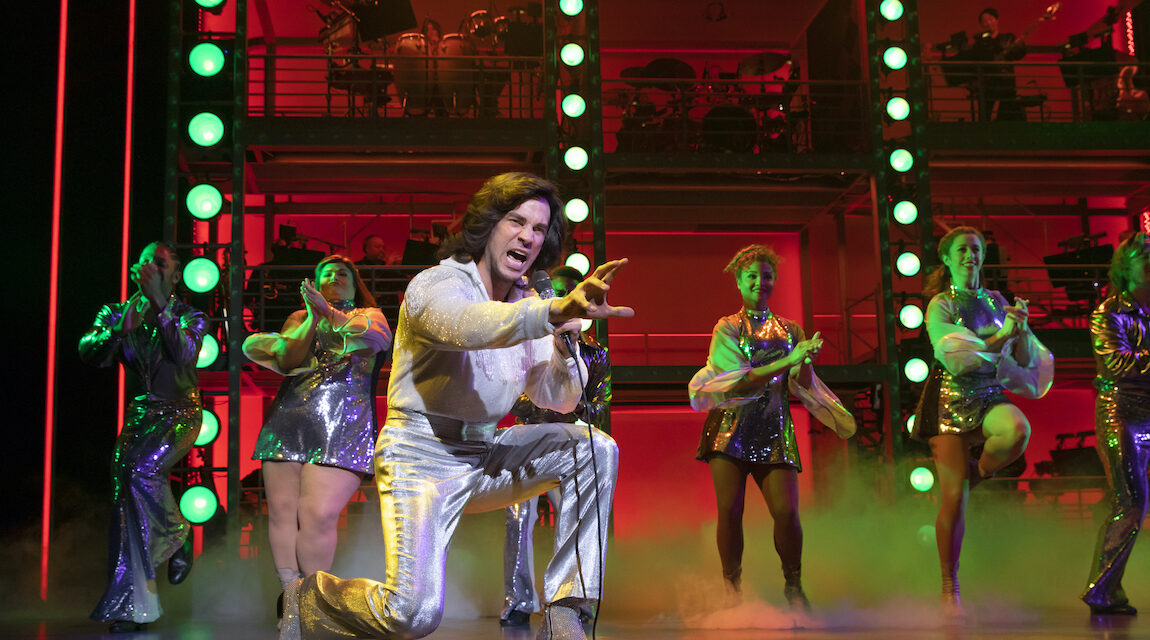 The latest in Broadway’s love affair with the jukebox musical is the life story of boomer heavyweight Neil Diamond, portrayed in A Beautiful Noise: The Neil Diamond Musical. It’s a big, bold sock-it-to-‘em bonanza of big hits from the impressive Diamond catalog, led by an energetic, charismatic Will Swenson. For Diamond fans A Beautiful Noise is a love letter and a bounteous gift of musical exultation, with enough juice to welcome a non-boomer audience into the cult of Diamond.

As for the book, Anthony McCarten’s well-considered intention is to give the production deep meaning, to elevate it beyond the status of essentially a club act of tunes. His text uses the conceit of Diamond (now), played by Mark Jacoby, in a psychiatric session with his analyst (Linda Powell). Since narrative demands drama, that’s provided in the now Diamond’s resistance to the process. He’s there because his (third) wife demands it, not because he wants to. A lightbulb moment comes when the good doctor hits on the notion that the key to cracking Diamond open is through his lyrics. That technique is acceptable to the now Diamond, who seeks through his own output to answer the existential questions of who am I? and why am I? And so off we go into the early 1960s with a struggling young songwriter trying to break into the music business.

Enter Swenson as Diamond (then), who gets his break from Ellie Greenwich, in a wise-cracking character trope, deliciously played by Bri Sudia (who later appears as Diamond’s mother, Rose). From the title song, “A Beautiful Noise,” through others such as “I’m a Believer,” “Cracklin’ Rosie,” “Solitary Man” and more, Diamond’s life is spooled out with a “call-and-response” gambit via the therapy sessions. The nine-clock number, “Sweet Caroline,” is a marker that Diamond has now made it big.

In Act Two, beyond the struggles and a divorce—he cheats on first wife Jaye Posner (Jessie Fisher) and marries the woman he cheated with, Marcia Murphey (Robyn Hurder)—Diamond has now achieved mega success. He’s a rock star, and the shift in mood is heavy on glamour Neil, playing to stadiums full of adoring fans worldwide. Key in “America” and “Brooklyn Roads” (with flashbacks to Diamond’s youth, growing up in Brooklyn). But an addiction to touring breaks the marriage to Murphey, and the theme of constant loneliness despite success is yet again revisited in the therapy sessions. Finally, both Neils confront each other in the big, climactic breakthrough, answering those existential questions with an over-the-top duet of “I Am …I Said.”

There’s a lot of heft behind A Beautiful Noise. The show has Diamond’s imprimatur on it, with a letter from the star in the Playbill. He’s 81 now and has stopped touring because of Parkinson’s disease, but the superstar is game to live on in a Broadway incarnation. And the reality of his success is that his legacy can’t be diminished— among others, kudos include ten Top-10 Hits, 140 million albums sold, Grammy Awards, induction into the Rock and Roll and Songwriters Halls of Fame, a Lifetime Achievement Grammy and the Kennedy Center Honors. His Jersey Boys friend and record producer, Bob Gaudio, has been a guiding force in promoting and shaping A Beautiful Noise. Diamond has freely talked about his years of psychoanalysis and so endorsed the concept to frame his story within the therapy sessions. Yet, the narrative, repetitive and simplistic in therapeutic terms, ultimately gets in the way of the story being enacted on stage. It also forces Jacoby into reactive acting, to be an ever-vigilant observer of the other Neil—and that’s got to be wearing. Ultimately, the constant presence of Jacoby and Powell on stage in easy chairs becomes distracting. Direction by Michael Mayer is generally effective and astute, but may need a rethink on how Diamond (now) inhabits the stage.

The strong suit and strength in A Beautiful Noise is Swenson himself, who’s a more than credible facsimile of Diamond. Serendipitously, he’s had years of practice for the role. As a kid he discovered Diamond, fell in love with the work and actually spent hours trying to sing and sound like him. To his credit, his portrayal is not mimicry; Swenson is able to inhabit the Diamond persona with a high degree of authenticity. The man and his work matter to him, and it shows in his unimpeachable performance. Plus, there’s a bonus at the end of the show at bows, with an enthusiastic Swenson and cast joyously leading the audience in a sing-a-long, principally with the showpiece, “Sweet Caroline.”

About a dozen talented ensemble members help bring A Beautiful Noise to life, among them Michael McCormick and Tom Alan Robbins in secondary character roles. Choreographer Steven Hogget keeps the fast-paced action of the show moving with plenty of energy. The set by David Rockwell is simple, but gets a boost by Kevin Adams’ lighting design, which is spot-on in emulating a rock star atmosphere without being overpowering. Sound, by Jessica Paz, ratchets the audio up to levels suitable for rock stars, yet with an awareness of the limits of a Broadway theater. Costumes by Emilio Sosa are fun and glitzy, especially in Act Two where a bespangled Diamond is at the peak of his career.

A huge star of A Beautiful Noise is the onstage band, led by music supervisor and keyboard artist, Sonny Paladino. His arrangements of the music flawlessly conveyed the Diamond sound in a subtly updated and tempo-perfect understanding of the catalog. Thirteen band members, with strings, brass, percussion and basses acoustic and electric, formed a crackerjack little orchestra that enhanced the good-time feeling that was sublimely “So good, so good, so good.”

A Beautiful Noise The Neil Diamond Musical has a run time of 2 hours and 15 minutes, plus intermission, at the Broadhurst Theatre, 235 West 44 St., New York, NY. For tickets and more information, visit https://abeautifulnoisethemusical.com