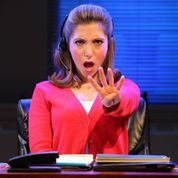 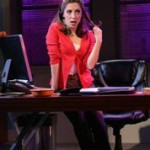 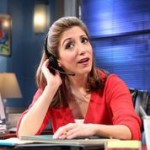 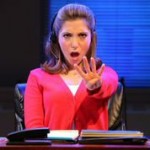 The calendar says February but it’s October at the Westside Theatre, where Greg Edwards and Andy Sandberg’s Application Pending has taken up residence. A tasteful jack-o-lantern adorns the set, the admissions office of an upscale Manhattan grammar school. Tiny plastic pumpkins line the windowsill. Flashes of orange are everywhere, and the candy bowl on the desk is pumpkin-faced. It’s hard to imagine a Halloween tchotchke that‘s not somewhere on the stage.

It may seem like overkill, but we’re at the Edgely Preparatory Academy, an educational powerhouse where subtlety is not part of the curriculum. Or the syllabus. Or, most notably, the script. The office belongs to Edgely’s new director of pre-primary admissions, Christine (Christina Bianco). She’d rather teach kindergarten, but she needs the money so she takes what she can get. As Christine, Bianco is charming, but she also plays a gaggle of characters with whom Christine speaks by phone. As such, she’s….less charming.

Christine converses with colleagues, officials, friends, and relatives, but by far the majority of her callers are parents of applicants trying to ensure their child’s admission. They have funny voices and funny accents. They’re overbearing, obnoxious, whacky, and unrelenting. They’re stereotypes, clichés, and caricatures. Their funny voices and funny accents aren’t so funny after all.

Bianco, best known for mimicking celebrities, demonstrates a gift for tracking speech patterns and vocal mannerisms of various ethnic and socio-economic groups. From Southern to European to infinite variations on Upper East Side snooty, she’s got them nailed. But her impressions are paper thin. That doesn’t necessarily matter in the celebrity realm, where simply exaggerating a tick or affectation is good for a laugh. But portraying a completely fictional personage is usually called acting, and there’s very little acting happening on the stage at the Westside. Instead there’s shtick, well-executed shtick to be sure, but shtick nonetheless.

Funnier material from playwrights Greg Edwards and Andy Sandberg would help. Their one liners are only occasionally laugh-worthy. Mostly they’re obvious and overblown, just like the play’s characters. And the nonstop succession of phone calls impedes meaningful character development. Dialogue is reduced to an exchange of sound bites.

Application Pending doesn’t lack for ethnic slurs either. Most are arguably justified as illustrating the prejudice of the speaker. Some are not. None are particularly amusing. Interestingly enough, the cacophony of parental prodding has little to do with the play’s actual – albeit incidental – story lines. The first concerns Christine’s son, whom she’s promised to take to Pumpkins in the Park that evening. Unfortunately her autocratic boss insists that she attend a banquet or lose her job. Plotline number two involves her doing battle with a self-important colleague to secure a scholarship for a deserving applicant. Finally, there’s a competition of sorts with another elite school whose admissions director keeps calling Christine to gloat.

Far be it from me to give away the endings of any of these narratives. Suffice it to say you won’t be surprised.
Pumpkin proliferation notwithstanding, Colin McGurk’s set nicely approximates what one thinks an office in a modern, well-to-do academic institution might look like. The room is bright and airy, the desk sleek with clean lines; the computer monitor oversized. (Not that Christine turns it on. Seems none of the parents has heard of e-mail.)

Jeff Croiter’s lighting is somewhat puzzling. It alternates between illuminating the stage generally and focusing on the person to whom Christine is speaking, which wouldn’t be so bad if the changes didn’t happen so quickly. The overall effect is more distracting than enlightening.

Andy Sandberg’s direction is smooth, but to no avail. Application Pending is more a collection of underdeveloped skits than a play. Rapid fire impersonations may work as a nightclub act, but a play, even at seventy-five minutes, needs some substance. 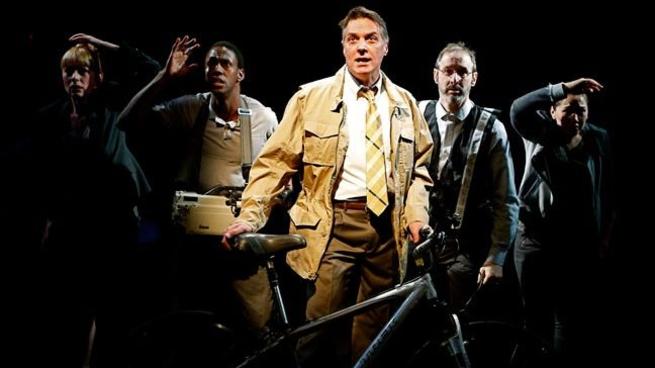 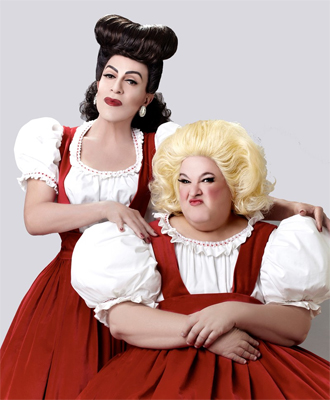