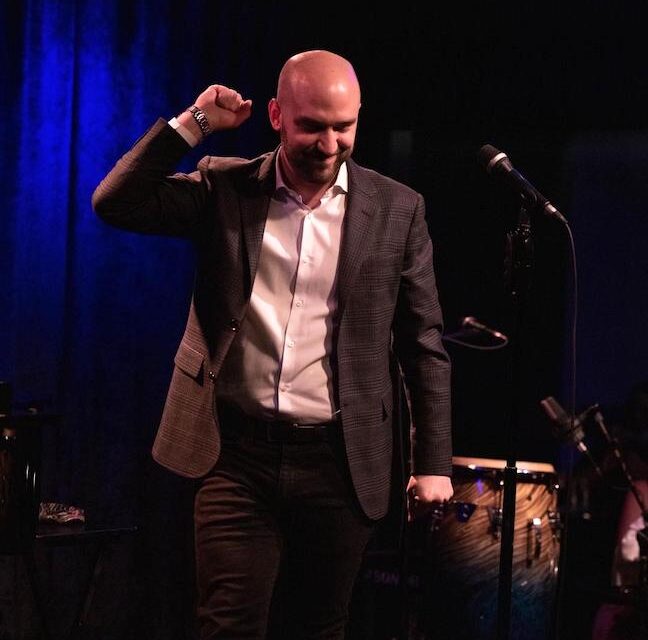 Ari Axelrod, MAC Award Nominee for Best Male Vocalist, BroadwayWorld Award Winner, and recipient of The Jewish Week’s 36 Under 36 Award, is somewhat of a paradox—in a good way. He shines with the demeanor of youth and yet, at the same time, reflects with the sagacity of age. He’s at once widely enthusiastic but also brings with him an undercurrent of gravitas—and he’s not yet 30. As to the latter, for example, he asserts that an aria, aside from the dictionary definition is to him, any moment in life where words alone fail to express what we’re feeling, and so to fully express it, we add music to those moments to elevate them and sing. Likewise he defines a “standard” as “songs that are standards, songs that should be standards, and songs that will one day become standards.” He has strong opinions—many of them, and that’s part of his charm.

Leading with a medley of “Pure Imagination” (Leslie Bricusse, Anthony Newley ) and “Never Neverland” (Jule Styne, Betty Comden and Adolph Green), Axelrod establishes his presence of the stage with authority. He has a gentle yet fierce energy—another paradox. Fearlessly he makes connections with his audience, defying any sense of a fourth wall. This kind of statement suits him; it’s who he is, authentic. Clearly Axelrod is a person who feels deeply and this is sensed and appreciated by his audience. He’s also highly theatrical, not merely a singer who acts his material, but one who inhabits the lyric from the inside out. That drama is apparent in “Once Upon Another Time” (Sara Bareilles) offered holding a candle in near darkness and extinguishing it at the end with a quick breath.

As if possessing a flexible, smooth tenor (and knowing how to use it) isn’t enough, it turns out Axelrod is quite the conga drum player. He flawlessly accompanied himself on West Side Story’s “Cool” (Leonard Bernstein, Stephen Sondheim), spinning out a slow slinky-snaky version with sinuous flair. On Jason Robert Brown’s “Stars and the Moon” his drumming is joyous, his vocal equally upbeat.

Poignantly, yet without a hint of mawkishness, he relates a literally life-changing event in his younger life. Suffering during his teen years (especially) from bouts of vertigo, his physical health and the vertigo attacks worsened. In a tale all too common regarding the diagnoses of non-standard conditions, it was finally discovered that he had an Arnold Chiari Malformation, an abnormality of the brain stem. A delicate operation was the only cure, the outcome not a certainty. But by age 21 he’d attained a clean bill of health due to successful surgery and now considers his ordeal his greatest gift. Accordingly, he sings “a surgery medley” thematically about “life.” Worth the price of admission, as the saying goes, was seeing the love Axelrod has for his furry companion—and likewise observing the same devotion flowing from pet to man. Indeed, love is love.

Heartstring pulling came again at a very special moment, about three quarters into the show. Axelrod began to wax poetic about his dog, Leo, proving his claim that Leo is THE best dog with an extraordinary story. In an airport, Leo pulled Axelrod forcefully to another gate where sat a woman by herself. It turns out there was great sadness in her life and Leo’s obvious attention toward her was a healing that went deep. The surprise: Leo appeared on stage. With this special pooch in his arms, Axelrod sang a song of healing he dedicated to the audience: “Unexpressed” (John Bucchino, Adam Guettel).

Music direction was by Broadway veteran Larry Yurman, and herein is a note about his muscular piano playing. In his enthusiasm, Yurman seemed to forget he was playing in an intimate cabaret space and not in a Broadway pit. The consequence being that the piano overpowered Axelrod’s vocals from time to time. A modicum of restraint would go a long way in supporting the singer, especially when his dynamic attack is on the softer aspects of a vocal delivery.

Axelrod was superbly directed by Jeff Harnar, who knows a thing or more about putting together a successful cabaret show, both as a performer himself and as a director. With this guidance, and his innate talent and instincts, Axelrod demonstrated polish and a fine appreciation of the material that made up a splendid, eclectic set—from songbook standards to Broadway to worthy quiet gems.