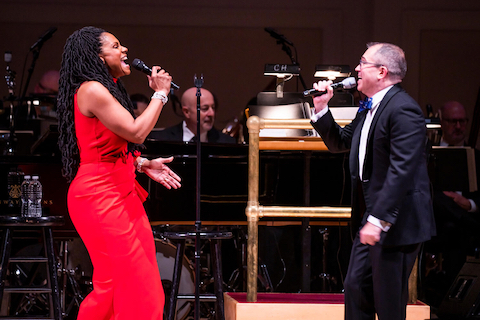 Leave it to Audra McDonald to perform a celebrated “11 o’clock number” at 8:05 pm – Jerry Herman’s moving anthem “I Am What I Am” – and still keep a packed house at Carnegie Hall cheering and waiting for more! Yet, as McDonald quickly told the adoring crowd, there was a method to her “madness.” She chose the number in light of the recent shooting in a Colorado Springs gay club to let her many LGBQTIA fans know they deserved to love whoever they decided to love.

And so it went for the next two hours with McDonald, who seemed to be just as happy as her audience to be in this celebrated venue on Saturday, December 3 (her day off from Broadway’s Ohio State Murders, no less). Backed by a nearly 50-piece orchestra led by her music director Andy Einhorn (making his conducting debut), she delivered a dazzling two-act program of songs that had political messages or sentimental and personal meanings.

“Being Good (Isn’t Good Enough)” was not only dedicated to its originator, the great Leslie Uggams, but expressed McDonald’s feelings that all black people (especially women) must do things twice as well as others to feel accepted. Meanwhile, a medley of “Children Will Listen” and “You’ve Got to Be Carefully Taught” was a potent reminder that hatred and prejudice are perhaps more prevalent in our country than ever before.

Lovingly recalling her childhood in Fresno (and with her mom in the audience), she performed a few tunes from her much younger days, including a jazzy, sexualized “Cornet Man,” which she admitted was completely unsuitable for her then-14-year-old self. (Still, it won her first place in a national singing competition!) Graciously, she urged people to go hear it sung by a more age-appropriate performer (without naming names) in the current Broadway revival of “Funny Girl.”

Her voice, one’s of nature’s marvels, consistently sounded even richer and more lustrous than ever, but has lost none of its flexibility. To prove it, she performed the magnificent Rodgers & Hammerstein ballad “Mr. Snow” — which she sang in the 1994 Broadway revival of Carousel (earning her the first of six Tony Awards) — in its original key.

Furthermore, her operatic soared time and again throughout the evening, including unforgettable renditions of “Pure Imagination,” “Will He Like Me,” “Gorgeous,” “In My Solitude,” “Home,” and especially “Summertime,” which she performed without the benefit of a microphone.

Still, there were two moments that left the audience breathless. To end the first act, McDonald, who has been rumored to be considering starring in (yet another) revival of “Gypsy,” unleashed a fierce “Rose’s Turn,” alternately sassy and terrifying, that should make every producer in New York turn this dream into a reality as soon as possible.

And her official second-act closer was a magnificently reinvented version of Kander & Ebb’s “Cabaret,” darker and deeper than usual, that she previously performed at the 2021 Met Gala at the “request” of its organizer, Conde Nast editrix Anna Wintour.

Could Audra McDonald someday play Sally Bowles? As she proves every time that she’s on a stage, whether it be Carnegie Hall or the newly-named James Earl Jones Theatre, there is probably no role McDonald can’t play  — or no song she can’t sing perfectly — if she really wants to.