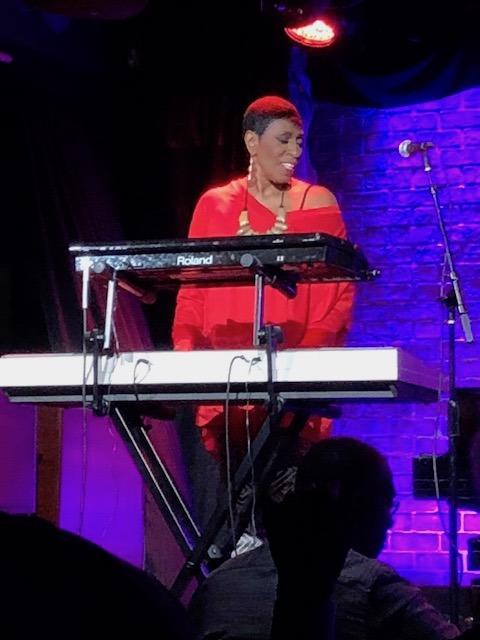 Aziza Miller has been around – formerly known as Linda Williams back in the day. . . she’s a fireball of musical energy that erupts in a fusion of funk, jazz, soul, Latin, blues; this gal has played to standing room only audiences in large and small haunts in and around New York. She’s a composer-songwriter-vocalist and was Natalie Cole’s musical director-pianist from 1975-1980, also composing the music for “La Costa” with lyrics by Ms. Cole. This led her to Ahmad Jamal who invited her to write lyrics to four of his original recorded compositions, which begot a contract with Arista Records and the release of her first solo album, City Living.

In a one night only return to Iridium Jazz Club, along with her exceptional musicians Sly Scott (tenor sax), Robert E. Daniels (bass), Damon Duewhite (drums), Roland Guerrero (percussion), Aziza Miller, on keyboard and synthesizer, musically directed and raised the roof opening with “La Costa” – first slow and laid back, then segueing into an updated Samba version. “Take Me Home” was a cultural journey to her roots offering up effects and sounds from far away places, as this fine musician effortlessly runs her fingers on and around the notes – it all speaks volumes. She offered up a smooth blues homage she wrote for Shirley Scott (hard bop/soul jazz organist) and Eddie ‘Lockjaw’ Davis (saxophonist) entitled “In The Kitchen” with an amazing array of percussion sounds from Roland Guerrero (bells, chimes, maracas, congas and things I cannot name – all extremely impressive).

Miller is a genius at extracting sounds and intonations that flow from her very being through her fingers and accentuate feelings. From hot jazz Latin style, to smooth and sassy, she creates a magical world.

Another notable tune is “Swag” – a composition about the various personalities and characters we all are and how we show it . . . no doubt all the explicit sounds coming from that synth say it all, amazingly enhanced by sax player, Sly Scott.

This is one talented and unique lady whether on a Broadway stage playing for Oprah in The Color Purple, or for Rain Pryor’s Fried Chicken & Latkes; or receiving the Presidential Scholar Distinguished Teacher Award from Pres. Bill Clinton. She’s also written a book The Divanary: A Dictionary for Divas inspired by her musical piece “Divas Don’t Apologize.”

The set flew by quickly and the audience was wild with the pleasurable sounds of Aziza Miller and Prime Time 27.  A don’t miss for jazz buffs!

Upcoming is Ashford and Simpson’s Sugar, West 72 Street on April 14.

Aziza Miller is a trail blazer and has many more mountains to climb. www.azizamiller.com