Baby Wants It All at 54 Below 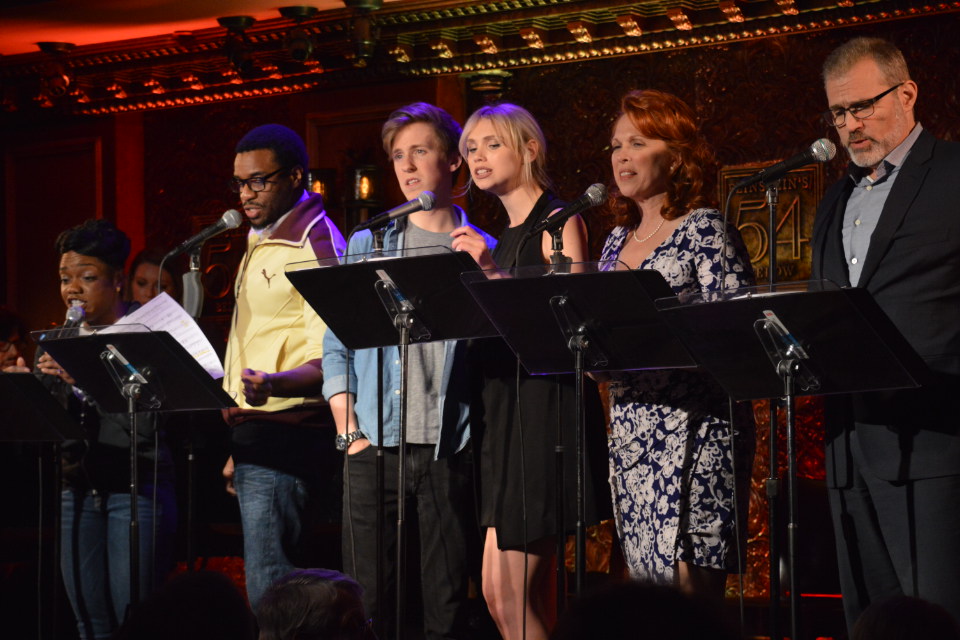 The musical Baby, with music by David Shire and lyrics by Richard Maltby, Jr. opened at the Ethel Barrymore Theatre in 1983 and ran for a total of 241 performances as a conventional book musical. 54 Sings Baby at 54 Below this past Sunday night presented the work as a song cycle, directed by Maltby, Deniz Cordell music directing from the piano, without a trace of the Sybille Pearson book to bind the tunes. Three singing couples and a terrific singing chorus of another six performers filled the stage with charm and the room with a joyous noise.

The individual tunes draw from traditions ranging from rock to jazz to potent Broadway ballads to explore the lives of three heterosexual couples and the babies they might be bringing into their lives. The youngest couple, Lizzy (Charlotte Maltby) and Danny (Charlie Franklin), are recent undergraduate lovers when Lizzy discovers she is pregnant. (The fact that this couple has no plans to marry might have been more provocative in 1983 than it is today.) Arlene (Carolee Carmello) and Alan (Marc Kudisch), are long-married 40-somethings who have raised three kids and are surprised by a new pregnancy. And Pam (Kenita R. Miller) and Nick (Antoine L. Smith) are married 30-somethings who confront a miscarriage and subsequent fertility challenges. The topic of reproductive choice isn’t explored deeply in this piece, nor are surrogacy and expensive and ethically questionable routes to parenthood that have become common themes in 21st century art and life. I found the absence of these now familiar tropes and plot points refreshing; this couple quickly commits to each other and to whatever may come in their future.

Before the concert, while I knew only the rough outlines of the musical’s story, I had long loved one of its standout tunes to which I was introduced, in my memory, during the 1984 televised Tony Award ceremony. That show opened with Baby’s showstopper “I Want It All” – a resonant, rousing, feminist, embracing, life-affirming anthem sung by the three hopeful mothers to be. As a joyous proclamation of 1983 and the feminism of that era, Lizzie, Pam, and Arlene described how they attempt to balance the lessons they learned from their mothers, new sexual and work freedoms, jobs and family, and committed relationships as partnership. The melodies and harmonies were rousing, the performers stellar, the roof duly knocked off the joint. Two of the men shine in “A Night She Comes Home to Me,” with lyrics and framing that called to mind Sondheim’s paean to married love, “Sorry-Grateful,” delivered in Company by a trio of married men to their single pal Bobby. In Baby’s take on an appreciation of coupled love, Antoine L. Smith’s solemn baritone and Charlie Franklin’s goofy sensibility explored the attributes they loved in their partners.

Ms. Malby stopped the show with her rendition of “The Story Goes On” that culminated with the delightful lyrics addressing every mother’s wonder at her in utero baby’s quickening, “it moved.” Played with Lizzie and the female ensemble, she described experiencing her place in the passage of the human story, what “one mother’s mother felt before.”

Carolee Carmello delivered Arlene’s show stopping number “Patter” with the layered acting the tune requires. Arlene mused on the pain and joys of the role of a mid-20th-century American middle-class wife, recalling the resonant anthem “Angel in the House” by The Story (Jonatha Brooke and Jennifer Kimball) that sonorously celebrates the quiet desperation of a woman alone in the house she keeps.

“With You,” a commitment tune between the fertility-challenged Nick and Pam, will bring tears to the eyes of anyone who has been anywhere near the pain of infertility. Part of the aching beauty of this tune and its sentiment, and the power of placing it before the conventional birthing final scene, is the layered recommitment of this couple to one another through their challenges, committing to “my life with you. Cast of Baby in Concert

Several minute-long ovations brought audience members and performers to tears. Because the songs are delivered without a narrator offering the book that originally knit the tunes together, certain nuances of the musical’s original story were a bit murky. The provided set list was annotated with the equivalent of chapter headings that a book would have underscored in the university setting – “prologue,” “midterm transition,” “term paper transition,” and “commencement chorale.” These markers indicate the passage of time, yet the tunes could be framed quite well without that geography.