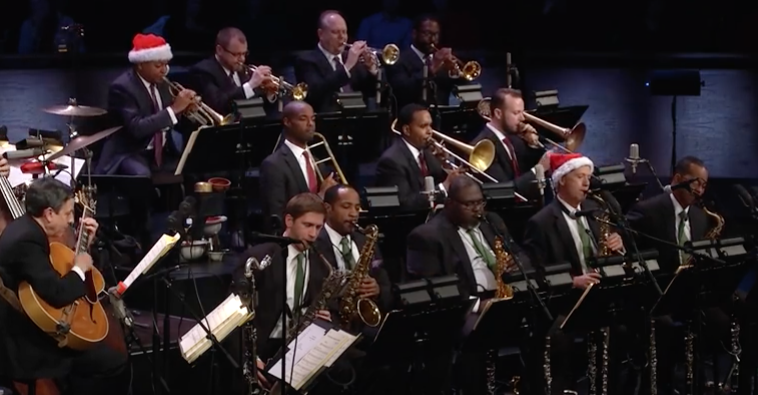 The Jazz at Lincoln Center Orchestra (JALCO) with Wynton Marsalis is always a treat to hear, especially around holiday time. No matter the weather or the cultural climate, their performance is a joyous lift into a happy place. With soulful jazz vocalists Catherine Russell and Kenny Washington returning this year, that trip to wonderland was even more special. Both singers are seasoned performers who are masters of phrasing, interpretation and that feeling of swing. On top of that, the JALCO, with its policy of promoting each and every band member with creative opportunity and liberally featured solos, is one of the sharpest, tightest groups to have ever graced a bandstand. Their precision sound is not only big and preternaturally in the groove, but full of complex musical ideas, contributed by those immensely talented players. Trumpeter and leader Marsalis makes an informative, genial host, with a penchant for wit and wry comedy. Setting this tone for the evening, the band opened with an uptempo swing version of “White Christmas,” bringing freshness to the (possibly overdone) standard.

Catherine Russell, whose smooth lower octave voice possesses reams of power, swung into a 1930s novelty hit, “What Will Santa Claus Say (When He Finds Everybody Swingin’?), toe-tappingly arranged in the syncopated swing style of the era by band trombonist, Chris Crenshaw. Russell also sang the original version (cut from the 1944 film, Meet Me in St. Louis) of “Have Yourself a Merry Little Christmas.” The guitar intro by James Chirillo was an effective mood-setter for the ballad, with lyrics more cynical than the final movie cut. The jazzy “Cool Yule” was an opportunity for Russell and the JALCO to swing out all the way, including an extended solo by the arranger, alto sax whiz, Sherman Irby. Kenny Washington, with an impressive multi-octave range, sang and scatted through “My Favorite Things” in a Broadway jazz arrangement by alto saxophone player, Ted Nash. The arrangement cleverly took advantage of changing modulations, with the brass weaving in and out of a power sound between solos and Washington’s vocals. As an added treat, tenor sax player Walter Blanding executed an extended bop style solo, an homage to John Coltrane’s iconic 1961 soprano sax version of the song. Washington also deftly and smoothly handled the ballad “Christmas Time Is Here,” which the band entered through a dramatic brass intro. It was explained by Marsalis as the start of the season in Thanksgiving, from the demised turkey’s point of view. Washington and Russell teamed up for “Joy to the World,” with a traditional brass introduction that evolved into a delightful swing version of the carol.

Both band set closers showed the power and might of the JALCO in their crisp arrangements. The Act One finale was an antidote to the string-laden version of composer Percy Faith’s original of “Brazilian Sleigh Ride.” The update, arranged by band bassist, Carlos Henriquez, emulated the motion of a fast-moving sled with a subtle Latin beat. Ted Nash’s flute and muted trumpets kept the sound airy and swift. Victor Goines’ extended wailing clarinet solo was evocative of horses galloping along. Making a fine conclusion to the evening, with musicianship at its peak, the band played out with “Jingle Bells.” But this wasn’t grandma’s version of the standard. Dan Nimmer’s nimble piano solo led straight into hyper drive, with the JALCO swinging Ernie Wilkins’ arrangement of the number for the Count Basie Orchestra, a band renowned for its power swing playing. The House of Swing was never more festive. It was a hot jazz holiday gift guaranteed to warm a frigid night outdoors.