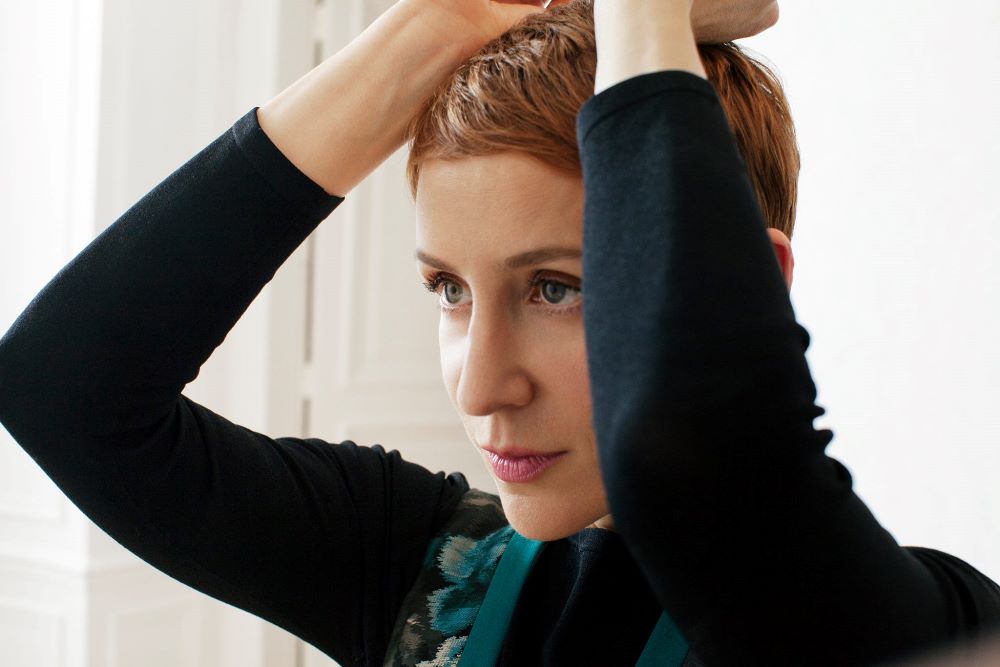 Stacey Kent is at Birdland to promote her 2017 album I Know I Dream, and lends her delicate vocals and spare musical stylings to English, Portuguese, and French tunes from that recording. She also delights with more familiar selections of standards long-time fans have known for years. In this perfect blending of old and new, she and four familiars (husband Jim Tomlinson on saxes and flutes, Art Hirahara on piano, Tom Hubbard on bass, and Anthony Pinciotti on drums) pare the symphonic treatment of Portuguese, French and English lyrics to fit the intimate Birdland venue. She says, and laughingly bemoans the fact that “we are only five,” when there were 58 musicians on I Know I Dream.“ Those in attendance at Birdland, to a person, know by the show’s end that these musical voices are just enough, perfectly balanced, in harmonic dialogue or on solo flights.

Her reach is expanding, her gentle singing style finding new stories to tell. “Make It Up,” from the new album, opens the set and is a bossa nova love song with the entrancing lyrical invitation to “just make it up as we go along.” She follows this with a rarely-performed tune from Irving Berlin’s Annie Get Your Gun. “Lost in His Arms” comes at us as the quiet yearning love song it was meant to be, with an extended Tomlinson sax solo that moves and charms. Kent rolls out her clear direct vocals with a languid quality and pace that evokes Shirley Horn, yet Kent’s style is all her own. At this early point in the performance, Kent pauses to reflect on her joy at being back at Birdland, and her happy audience echoes that joy back to her.

Songs sometimes translated from their original languages maintain the themes of lost love, yearning connection, and human scale stories Kent established at the top of the evening. “Les amours perdues” / “The Lost Loves” (Juliette Greco, originally written by Serge Gainsbourg) is from the new recording; “Dindi” (Antonio Carlos Jobim) is from her established repertoire; “The Face I Love” (Marcos Valle) continues the mood with lyrics like “just think of things like daffodils, and you’ll see the face of the one I love.”

The gang of five takes on the 1959 Cy Coleman and Carolyn Leigh standard “The Best is Yet to Come,” and we can only imagine how a big band behind her could soar on these big lyrical phrases. Kent and her musicians tone down the volume, and she giggles and romps her way through the joy of this tune.

The recording’s title song, “I Know I Dream” (Jim Tomlinson), continues to build the universe Kent crafts with each performance. There’s an energized silence again evoking Shirley Horn’s phrasing, and Blossom Dearie’s quiet jazzy lyrical approach to lyrics such as “I don’t remember dreams / it would only take a single dream to light my way to you.”

Among the gems of the evening are recent collaborations between Kent and Tomlinson and the Japanese novelist Kazuo Ishiguro. This surprising connection began with a friendship between Kent and Ishiguro, fans of each other’s work, and turned into songwriting adventures. “The Bullet Train” was inspired by descriptions of human scale reactions to the speed at which this train travels. “They call this the bullet train,” one lyrical phrase begins, “but it feels like we’re not moving at all.” And she concluded her set with a bonus track tune by the trio that’s a musing on the charms of the Icelandic Ice Hotel called “The Ice Hotel.”

The five-day engagement at Birdland begins with a familiar bossa nova rhythm and resolves with a new creation that muses on the hyper speed of the bullet train. This American-born musician who lives in Britain, speaks several languages and communicates musically in all of them, covers standards, continually creates, and surprises us within her established style. The tunes and arrangements are recognizably hers, even when we’re taking entirely new musical avenues.