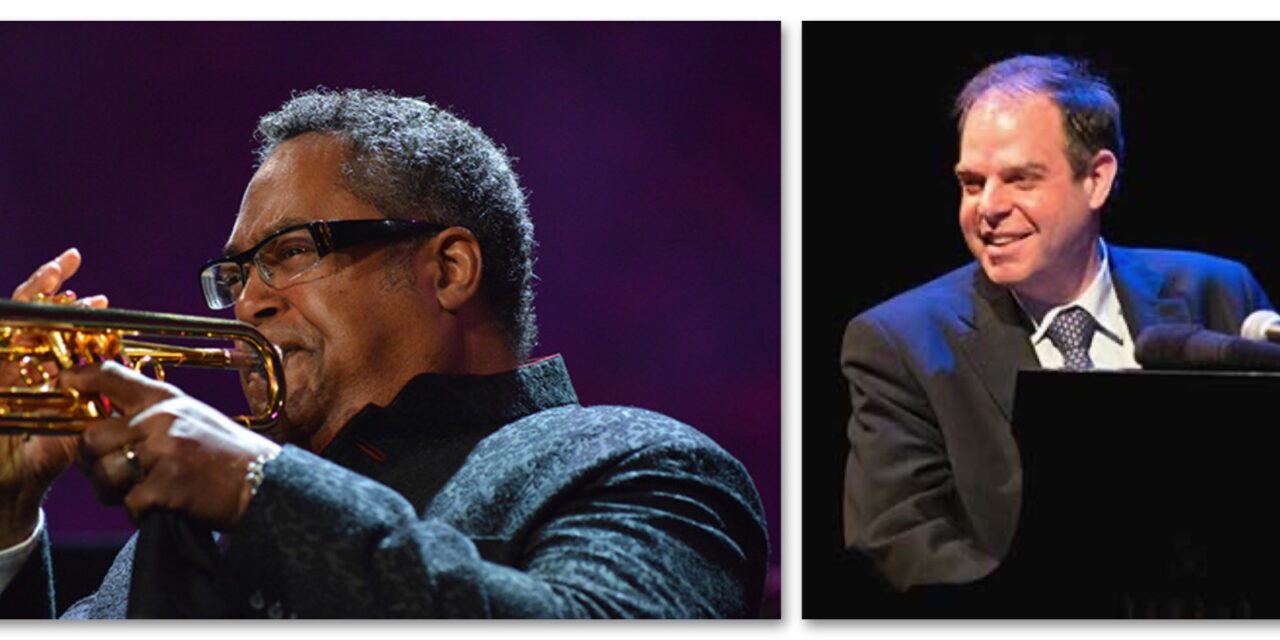 One of the most talented and versatile jazz pianists today, Bill Charlap, recently completed a five-night residency at Birdland Jazz Club, entitled, Duets. For each show, Charlap made music with one other jazz virtuoso, including saxophonists Houston Person and Chris Potter, bassist Ron Carter and trumpeter Jon Faddis—the subject of this review. It’s safe to assume all the shows were brilliant, and by virtue of direct reportage, this outing with Faddis was sublime.

Jon Faddis has established himself over many decades in jazz, as a giant in his field as a composer, player and educator. With his specially designed S43HDL-F Faddis Model instrument, a long sleek trumpet, he achieves a smooth, round tone that seems effortless. He’s also an established high-note player, entering that stratospheric territory with ease, resonant yet easy on the ears. Because Faddis and Charlap are both foremost interpreters of American popular song, the set was studded with standards such as the bright, lively opener, “Tea for Two” (Vincent Youmans, Irving Caesar). Noting the tune’s provenance, Charlap recited the lyrics—a key to his virtuosity on the keys. Jazz players who take the time to learn a number’s lyrics add immeasurably to their skills as storytellers. Charlap is a master at it, with a solo style that’s lyrical at its core, but infused with intelligent creative riffs, all resting on a platform of technical achievement.

Both Faddis and Charlap are superior storytellers and in their duets, like singers would, the two created harmonies and mood with great nuance. Both voices excelled at subtle interpretations, inserting creative ideas and improvisational riffs close to the melody; there was no need for showy razzmatazz. These two masters took a tune and created a narrative that ebbed and flowed through an easy arc to a satisfying conclusion. What’s more, their chemistry, laced with plenty of humor, elevated each number. For pure atmosphere, “I Can’t Get Started” (Vernon Duke) and “Yesterdays” (Jerome Kern), with Faddis playing mostly muted, entered the realm of intense mood, especially with the haunting melody of the latter. Call and response on “I Found a Million Dollar Baby” (Harry Warren) made for sweet interchange on an inherently joyous tune.

In the realm of pure jazz standard, many of which come from the bebop era, Charlap and Faddis played a less intense, more whimsical version of “Anthropology” (Charlie Parker, Dizzy Gillespie) and with “Fiesta Mojo,” written in Dizzy Gillespie’s Afro-Cuban period, offering a lively, bouncy samba groove. Other tunes by Gillespie, as well as Thelonius Monk, perhaps not so well known to audiences as songbook standards, were arranged from hard-driving bop roots to a gentler, more harmonic, melodic and thus more accessible presentation.

Magically, what Charlap and Faddis created was a set of such authenticity and artistry that it drew listeners into their tight creative circle. The spotlight was squarely on two virtuosos weaving a magical spell of music-making—so much so that a real sense of intimacy ensued. The large space of Birdland melted away. In its place was a homey interior, a small salon in which a feeling of warmth and welcome was created. Topping it off was an homage to Louis Armstrong—an encore in which the two played an emotive “Memories of You” (Eubie Blake). You could hear a pin drop before a thunderous applause.