“Same, Same but Different: The Songs of Drew Gasparini” 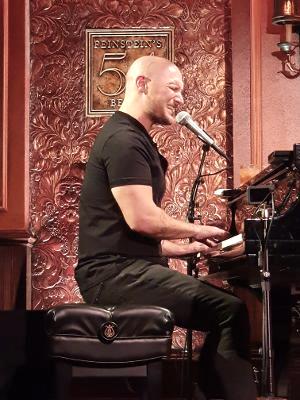 If you haven’t heard of the prodigiously talented Drew Gasparini before, this is about to change.  The young California native is a terrific performer and songwriter – an excellent singer, pianist and guitarist – whose well-crafted songs hold their own with anyone in pop and Broadway, with first-rate melodies and lyrics and an astonishing range of styles.  Drew composed the songs for the widely anticipated Broadway musical “Karate Kid – The Musical,” which hits the Great White Way in 2022 after a long, pandemic-generated delay.  He’s writing a new show with his best friend and frequent collaborator, Tony Award-nominee Alex Brightman (School of Rock), which will further raise his visibility.

Tonight’s sold-out performance was Drew’s long-awaited return to 54 Below, his home away from home for many years (“I should keep a cot in here”).  His usual format is to bookend himself between a slew of top Broadway performers singing his songs.  This show, he wrote me privately, would be different.  “It’s just me, a band, and a few backup singers.  Performing, chatting, reconnecting.  I wanted to make this first show back somewhat intimate just in order to feel the keys under my fingers again and share new material from my own head inspired by the time I gave myself for reevaluation during the pandemic.”  In his fourteen-song set, he delivered an excellent selection of new material, as well as a few fan favorites he could not resist performing.  Though he refrained from performing songs from “The Karate Kid” “because the producers are here,” his set was warm and personal, at times rather touching, and often outright funny.

Wearing a short-sleeved black tee-shirt to reveal a muscular look, Drew showed off his newly shaved head, without his trademark cap.  “I’m coming out as a bald man!” Starting on his guitar, with Simone Allen on piano, Drew set the tone for the evening with a wild, rambunctious “Sex, Drugs and Rock and Roll.”

“Not every song has to be for a musical,” Drew told the animated, enthusiastic crowd, before breaking into his energetic “Here We Go Again,” which mixed several styles in one song, and “live sampled” “Over the Rainbow” and the Beatles’ “Come Together.”

His voice was at its most delicate and compelling in the peppy ballad “Watch My Tone,” soaring with a light, airy sound reminiscent of the late, great Kenny Rankin.

Drew acknowledged his parents, Kele and George Gasparini, with a pair of songs.  “Mom Could Play Guitar” and “Essence of George,” two deeply personal songs, the first of which document Drew’s journey into music and the true story of how Drew learned to sing and play from his mother, and the second his father’s commitment to the family he “built up from the ground.”  With his proud parents here from California, it was quite a touching moment.

In a clever promotion, Drew asked the audience to take out their phones, instructing the crowd to film him while he made a plea to “The Rock” (actor Dwayne Johnson) formally inviting him to opening night of “The Karate Kid – The Musical.”  He asked everyone to blast this video over social media and tag “The Rock.”  The largely millennial, social media-savvy audience complied.

A pairing of funny songs, “Dumb Bastard” and “Hugh Grant,” showed Drew’s irreverent humor and delivery.  “How dopey does this one sound already,” he said of the second title, deadpanning after a pause, “Sing along.”

Drew ended the night with “On My Way,” about his journey with this gorgeous, powerful composition.  Drew Gasparini has been on his way for far too long.  He has arrived.

Produced by Drew’s manager, Erica Rotstein, with the assistance of Carly Heitner.