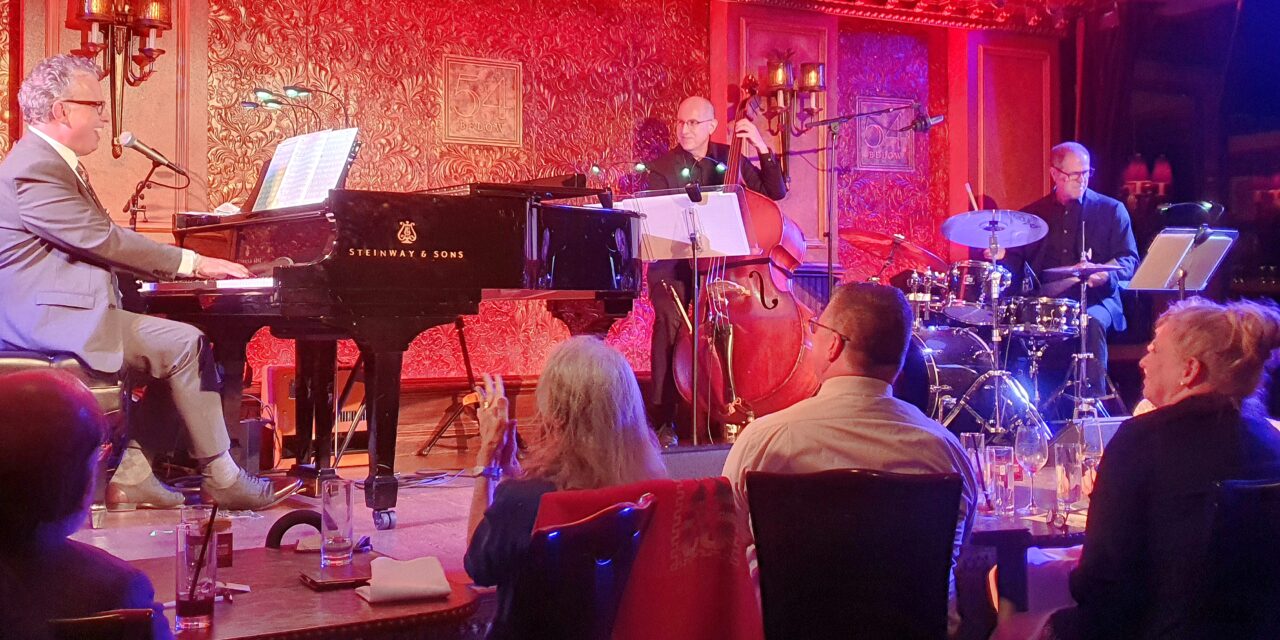 We started and ended our week with Billy Stritch, first with his Mel and Ella show with Gabrielle Stravelli on Monday (reviewed here), and capped off the week with his Cy Coleman tribute on Friday, the first of two nights at 54 Below.

Billy honored Cy Coleman with a delightful set of both familiar and obscure songs written by the late Broadway and pop composer, a musical prodigy who was also a topnotch jazz pianist.  The personable Mr. Stritch sprinkled anecdotes and trivia between songs.  His long personal and professional relationship with Liza Minnelli led to his eventual friendship with Mr. Coleman.  This was a lucky break for the audience as well as for Billy, as it ultimately gave him access to a number of Coleman rarities and unpublished compositions from the trunk that Billy shared with a sophisticated and appreciative packed house.

In addition to his own stellar piano playing, the star was backed by two of the best musicians in the business, Tom Hubbard on Bass and Eric Harvorson on drums.  This was not presented as a trio.  In fact, Mr. Hubbard and Mr. Harvorson were dressed in black and dimly lit, not to diminish them, but to keep the focus on the voice and piano.  Mr. Harvorson made extensive use of brushes for the set, using the sticks almost exclusively on a few jazz numbers.

Fully half of the program’s songs had lyrics by Carolyn Leigh, including the opening tune, “The Best is Yet to Come,” making it something of a celebration of her as well, as he acknowledged.  Though Leigh’s lyrics were sprinkled throughout the set, a three-song segment dedicated to her demonstrated her brilliance.  Her lyrics were “not only artful and crafty, but playful, too,” he noted after singing “You Fascinate Me So,” followed by a swell medley of “When in Rome” and “Witchcraft” – the latter one of several the pair wrote for Sinatra.

One of Cy Coleman’s later Broadway scores with City of Angels, written with David Zippel.  Billy’s stunning arrangement and rendition was quite a contrast to the lighter fare that preceded it.  Yet he followed this with an even lighter mode, with the surprise “Who knew?” tune, “The Laarge Daark Aardvark Song,” written by acclaimed 1960s song parodist Allan Sherman (best remembered for novelty records like “Hello Muddah, Hello Faddah” and “The Ballad of Harry Lewis”).

A pair of jazz songs Coleman wrote with Floyd Huddleston revealed another surprise, “Playboy’s Theme.” The opening vamp of this 1959 tune was the theme to the Playboy’s Penthouse and Playboy After Dark television show, which had many of the best jazz performers of the day playing in “Hef’s living room.”

One of Cy Coleman’s most familiar scores was for Sweet Charity, a star vehicle for Gwen Verdon on Broadway, with lyrics by the brilliant Dorothy Fields.  Billy’s medley from this show were from three iterations of Sweet Charity, and included “My Personal Property,” a song that rivals “[I’ll Take] Manhattan” for best and wittiest New York references, with lines like “The planetarium is mine alone, the old aquarium I also own.”  Theater Pizzazz favorite Lee Roy Reams, who made his Broadway debut in this show, was present at this performance.

The “final” number was a medley of “I Wanna Be Yours” and “I’ve Got Your Number,” both from the Neil Simon show Little Me.  Billy delivered Carolyn Leigh’s clever lyrics brilliantly, and closed with a big finish.

Billy Stritch delivered once again with this delightful evening of great music and charming stories, and deserves special kudos for incorporating some of the lesser-known gems of Cy Coleman’s catalog with the best-known.