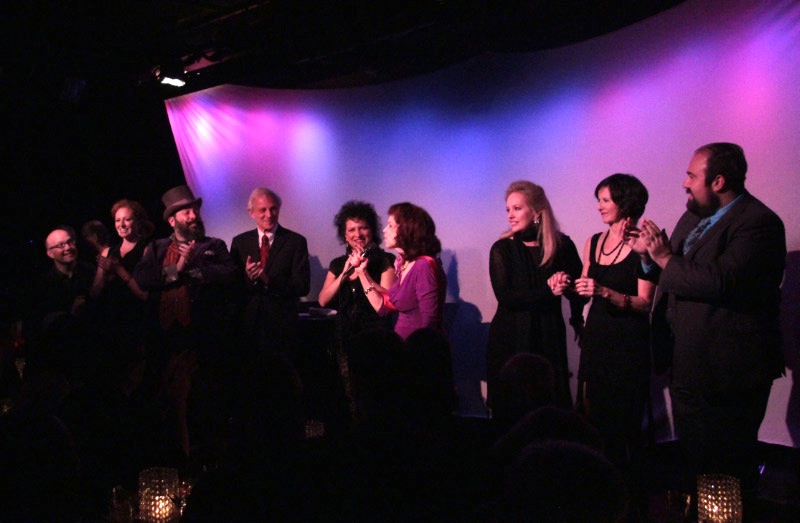 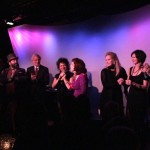 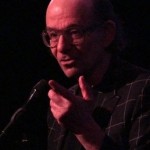 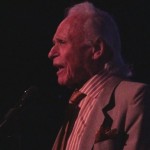 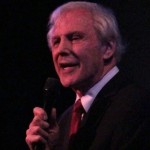 Bobbi Horowitz put together a special cabaret event October 14 at the Metropolitan Room entitled “Bobbie Horowitz Hosts:  Great Songwriters:  Up Close” honoring the works of Ervin Drake, John Meyer, and Jerry Livingston (through his son, David Livingston).  The exciting cast of performers were John Gabriel, Stacy Sullivan, Scott Coulter, Rosemary Loar, Laurie Krauz, Adam Shapiro, Kat Gang, David F.  Slone (Horowitz’ son,) and Marissa Mulder.  Bill Zeffiro was on the piano for most selections and every one’s favorite guitar player Sean Harness was very evident as well.  The Metropolitan Room was sold out despite some other competing cabaret and show events that night, with many performers, songwriters, and cabaret royalty (including Debbi Whiting) in attendance.  Every seat in the room was packed ten minutes before curtain.

Horowitz opened with a song she wrote with John Meyer, “When the Curtain Goes Up on a Musical.”  There were two songs he wrote for Judy Garland: Rosemary Loar’ singing “I’d Like To Hate Myself In the Morning” and Stacy Sullivan singing “After the Holidays.”  The last Meyer song was one from “The Betrayal of Nora Blake” that he wrote with Horowitz that had extended runs in London and Florida.  It was a twist on the good twin/bad twin movies and the situation was the good twin went to see a psychologist for help.  Adam Shapiro put on dark glasses and sang a hysterically funny song entitled “The Psychologist’s Song.” with clever lyric rhymes like “muck” and “Schmuck!”  It’s a great piece of material and I’d love to see a production of this musical.

Academy Award winning songwriter Jerry Livingston’s son, Dennis Livingston came on stage to talk about his father.  Three Broadway shows featured songs by Livingston.  The first selections were “Mairzy Doats“ and “Bibbidi Bobbidi Boo“ and the whole room was furnished with lyrics to sing-a-long led by Horowitz‘ son David F. Slone in a kind of busker fashion.  Award-winning Marissa Mulder sang very sweetly and movingly “A Dream Is A Wish Your Heart Makes.”  “Midnight Jump,” a traveling song, was energetically performed by Kat Gang.  Immediately after, Scott Coulter sat down at the piano and told a personal story about his mother before he sang Johnny Mathis’ big hit, “Twelfth of Never” with heart-breaking intensity.  We returned to comedy with Shapiro singing a bouncy love discovery song written by Dennis Livingston, “Such A Curious Feeling.”

94 year old Ervin Drake (“What Makes Sammy Run,” “Her First Roman”) was the fourth honoree.  With Daryl Kojak at the piano, Laurie Krauz sang one of Drake’s most famous songs, “Good Morning Heartache” with traumatic heaves and sighs, adding scats, giving a full acting performance, wailing and then subduing herself in resignation on the final notes.  She began and ended the song a cappella.  82 year old John Gabriel told the back story of one of Drake’s songs we all know.  Drake was in the Brill Building when he learned the Kingston Trio needed a song for an LP.  He went into a room and one half hour later came back with “It Was A Very Good Year.”  Frank Sinatra heard the recording on the radio in his car, stopped at a gas station, called his record producer and told him he wanted to record that song.  It became one of Sinatra’s biggest hits.

Stacy Sullivan told of how she was chosen to honor Drake at an Iridium gala but her first two selections were chosen by other singers,  She was prepared to drop out when she got a call from Drake’s wife, Edith, who shouted they wanted her to sing at the tribute.  Forcibly, Edith put Ervin on the phone and he recited the lyric to “In the Afternoon.”  Sullivan cried when she heard those lyrics, got the song and worked all day with her acting coach.  “In the Afternoon” is a sad, bittersweet song the “other woman” sings about only able to be with her married lover from one to four p.m. Monday through Friday.  The song details how she spends her hours waiting for those treasured moments and ultimately how forlorn she is when she breaks off the relationship.  Sullivan’s performance was a dramatic and musical tour de force and for my money “In the Afternoon” is better than “50 Per Cent,” a song with the same plotline.

Drake himself was brought on the stage and told some funny anecdotes.  The great treat was Ervin Drake singing (in full voice, pitch perfect) “I Believe.”  Needless to say, there was a standing ovation for this venerated songwriter.

After the acknowledgments and thanks, John Meyer returned to the stage and sang “Best Wishes,” about going home with everyone after the show and detailing all the personal things he’d like to do for them.  It was a great finish but even after it Horowitz and Meyer did a reprise of the first song “When the Curtain Goes Up On A Musical” entitled this time “When the Curtain Goes Down On A Musical.”

Horowitz certainly knows how to produce a special show and she is so adept at choosing the right performer to sing each selection.  Watch for her future events.