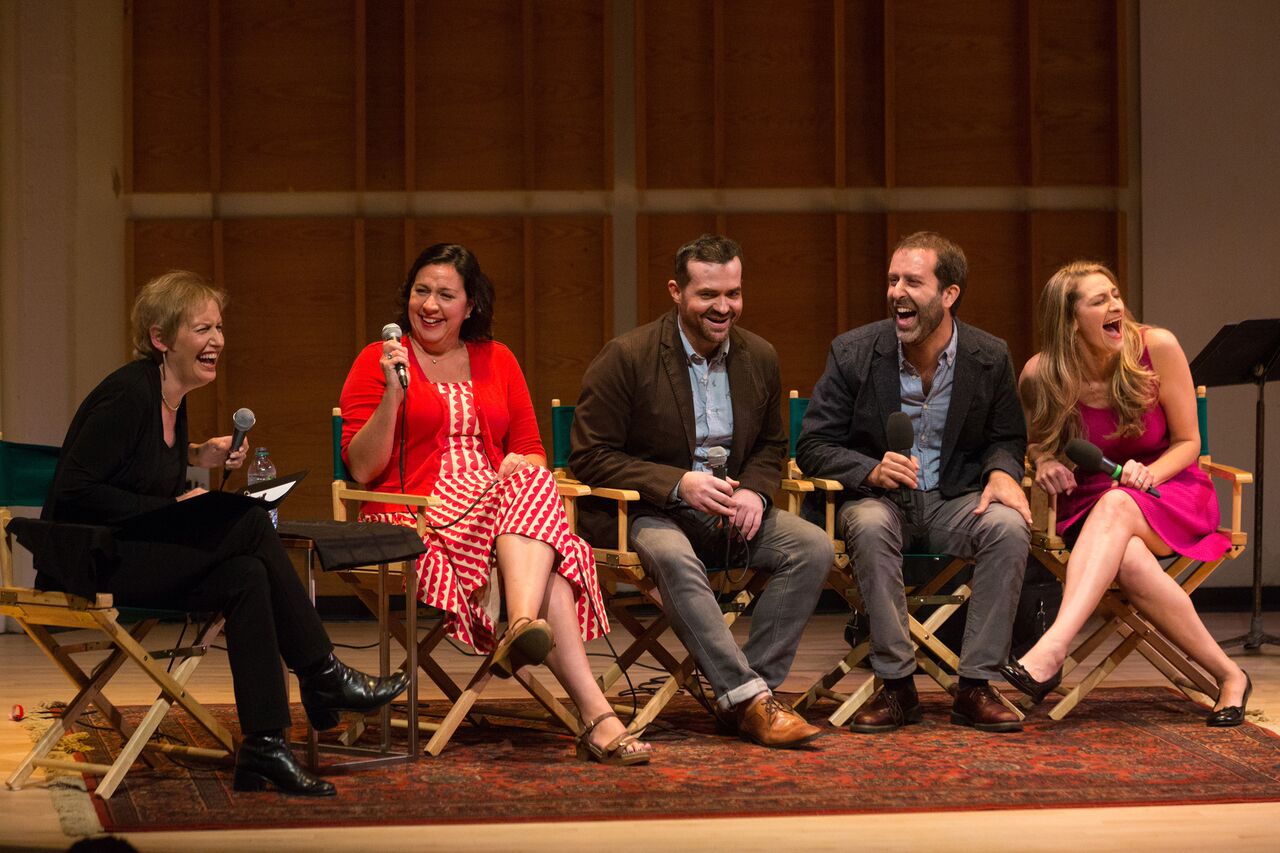 THE CREATIVE TEAMS OF FIVE SHOWS WERE FEATURED IN “BOUND FOR BROADWAY XVlll” MERKIN CONCERT HALL HOSTED BY LIZ CALLAWAY – BROADWAY CLOSE UP! The Kaufman Music Center’s series BROADWAY CLOSE UP begins each year with “Bound For Broadway” at Merkin Hall hosted by Liz Callaway. Many shows selected over the years have been produced on Broadway and off. On September 26, 2016, the 18th edition featured interviews with the creative teams of five shows, along with a talented cast singing several selections from each one. There was a full house despite competition from the televised presidential debates, but Liz commented that if “a certain person is elected, Bound For Broadway will be held in Toronto next year.” This show is about the fantasy world of online gaming and blends romance, adventure and virtual reality, over a pop-infused score.

A production in Denmark is now in the works for the fall. A large cast was assembled for the opening number “When We Play” about the excitement people feel getting involved in these games that included Patrick Lundquist (who also soloed on “Dead Again”), Jeremy Morse, Olutayo, Daniel Stewart, Zachary Francis Stewart, Travis Mitchell and Andrea Daly. Betsy Wolfe sang “Why Not Me” as one of gaming characters that comes to life at the end of Act 2. This is the story of Marie and Pierre Curie, the two revolutionary scientists who discovered radium. Will and Eric have been writing together for eleven years, and Eric fulfilled a dream working as an assistant to the legendary Hal Prince. Four songs were sung with Brynn O’Malley and Erin Mackey sharing the roles of Marie Curie, and Drew Gehling as Pierre. “Wondering Why” was sung when the couple are on their first date, and the love duet “A Lifetime” was beautiful as it is sung when they get married. The composers mentioned that they learned a lot of science along the way, that radium is theatrical because it glows and can cure but also kill. They said that it is not easy writing songs containing chemical compounds as when Marie (Brynn) is cooking in “Stir.” Music by WILL ARONSON; Lyrics by DANIEL MATÉ; Book by HANNAH KOHL. Will Aronson on the piano.

This very dark take on the Grimms’ fairy tale, “Hansel & Gretl” follows the children of the couple “Heidl & Gunter” after they had escaped from the witch. Since the parents had trauma in their childhoods, they are very protective of their children as in “Come Home Safe” sung by Beth Kirkpatrick, Katie Lee Hill, Will Sevedge, and Joshua David Cavanaugh. Emily Walton and Noah Zachary as the children sang, “Dear Random Stranger.” Grace McClean with Katie Lee Hill, Will Sevedge, Joshua David Cavanaugh sang “Best. Meal. Ever.” The show was performed at NAMT’s Songwriter Sessions in 2014 at New World Stages. “In Transit” was featured in Bound for Broadway in 2004 and originally titled “Along The Way.” It has been in the works for 16 years and follows the intertwining lives of eleven New Yorkers, all hoping to catch the express train to success, love and happiness—and the stops they make along the way. The writers first began this as a cabaret show and it progressed as their lives changed along the way. “In Transit” will open on November 10 at Circle in the Square and features a talented cast who were not available for this presentation. However, the remarkable creative team featuring Kristin and Sara sang two songs about their lives and were simply terrific. Although this is the first acapella musical, for this evening, Rick Hop-Flores was on piano and Chesney Snow performed mouth percussion. Book & Lyrics by RICK ELICE (Peter and the Starcatcher, Jersey Boys); Book & Music by WILL VAN DYKE and on piano. Grant Braddock, percussion.

In 1924, the first man to climb Mount Everest disappears 800 feet from the summit. Eighty years later, his body is discovered by an American climber, who finds with it a profoundly romantic letter, which one would naturally assume was meant for the Englishman’s wife. Only maybe it wasn’t. The title song takes place at the end of Act 1 was sung by Sebastian Arcelus, Nicholas Christopher and Betsy Wolfe. “Higher” begins Act 2 with the great voices of Sebastian and Nicolas.

Liz Callaway is a skilled interviewer and her joy, talking with the composers and seeing these shows evolve, is evident. A highlight of an exciting and informative evening of original songs was her moving version of “You, The Mountain and Me” from Magnificent Climb which brought the show to a close.