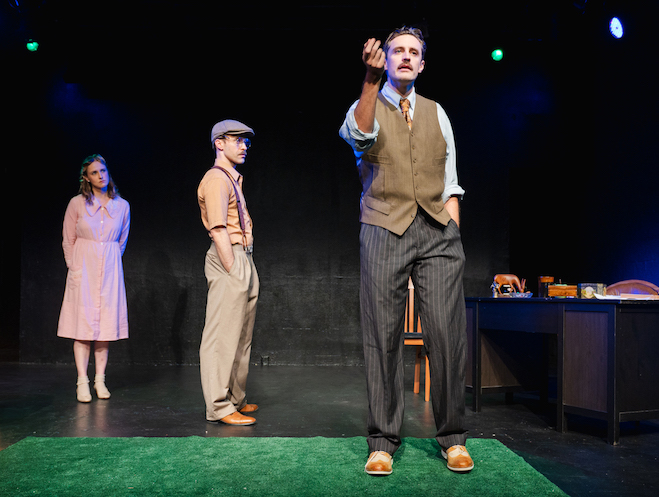 Thirdwing, both a theatrical and online theatre company, has produced a very intriguing short play by Cameron Darwin Bassort at the Wild Project on Manhattan’s East Side this month for a short run ending September 18th. However, what to exactly call it is problematic to discern from how it appears in the cover of the program, as you can see here:

It took some time to figure out that the play is titled Burbank and is the second of Bassort’s A Venomous Color series, subtitled Walt Disney in Crisis (whew). Both plays, set in the 1930s and 40s, concern themselves with life for the employer and employees at the Disney Studio, still located in Burbank, California. The first, Disney Girls, about women who toiled as low paid pen and ink artists, is available online for streaming, soon to be followed by this production of Burbank (filmed at the performance I attended for that very purpose). Both concern themselves with the wide divide between labor and management at Disney during the tumultuous years of the Great Depression and the advent of World War II, a subject ripe for the picking.

This bare bones production features a drafting table stage right and a desk and two chairs stage left and, when outdoors, a tiny stretch of green carpet substituting for a patch of lawn. With only a minimum of props (two phones, an apple and a sandwich), it concentrates entirely on text and the performance of its three characters. It’s easy to appreciate the simplicity in its presentation, though it certainly wouldn’t hurt to see the play done on a larger scale without sacrificing any intimacy. At 75 minutes, it could even be a tad longer in order to strengthen the characters other than Disney, not by way of backstory, but by deepening certain scenes so they can have a bit more breathing room. Some confrontations erupt to a boil too quickly, when a slow simmer would be more effective.

Playing Disney is the playwright himself and Bassort captures multiple aspects of the complex virtuoso. Having read about him over the years, there were many sides to the man other than the genial Uncle Walt, to whom he was known to millions of early TV viewers as the host of his eponymous series which ran on network television continuously over a thirty-six year span (minus one two-year hiatus). Disney personally introduced the weekly series for its first twelve seasons prior to his death from lung cancer at age sixty-five, and I can tell you that as a child, I found his kindly presence a balm to my boisterous family life. And just about every person of my generation adored The Mickey Mouse Club and everything about the magic of Disneyland, a personal vision and phenomenal success that Disney supervised personally in painstaking detail. What the play details is that anything or anyone that got in the way of his visionary ways had to be destroyed. A rabid anti-unionist, Disney believed anyone in his employ who dared ask for more simply didn’t deserve to work for him. Didn’t they understand they were working for the greater good? To give the world joy and laughter through his groundbreaking animation techniques and storytelling? It’s also been well documented that if he wasn’t personally anti-Semitic, his biographer, Neal Gabler, allows that Disney “willingly, even enthusiastically, embraced [anti-Semites] and cast his fate with them.”

This play side-steps that issue a bit, concerning itself as it does with the story of one of Disney’s great animators, Art Babbitt (Ryan Blackwell) and his relationship with an up-and-coming young artist, Betty Ann Dunbar (Kelley Lord) against the backdrop of a studio strike pitting management against labor. Having found Betty Ann passed out on the lawn in front of a building on the Disney lot in Burbank, Babbitt is shocked to discover she is making a wage so low that she can barely afford to feed herself. To Babbitt’s surprise, Betty Ann is somewhat happy to sacrifice for her art, as she believes to have reached the pinnacle in service to a man as brilliant as Walt Disney. Babbitt, who is in the middle of his own existential crisis, becomes a leader in a strike for better wages, which is the crux of the drama, particularly in one-on-one meetings he was with the Great Man himself.

The acting is quite good, with Bassort’s Disney a standout. Surprisingly, there is no direction credited, which bodes the conclusion that the playwright doubled as both leading man and director. If the play were to receive a new staging, with perhaps an expanded text and higher production values, someone new would be of invaluable assistance. But as it stands, Burbank, provides a brief glimpse into a man who lived to tell stories, with a storytelling all its own that makes for bracing entertainment.