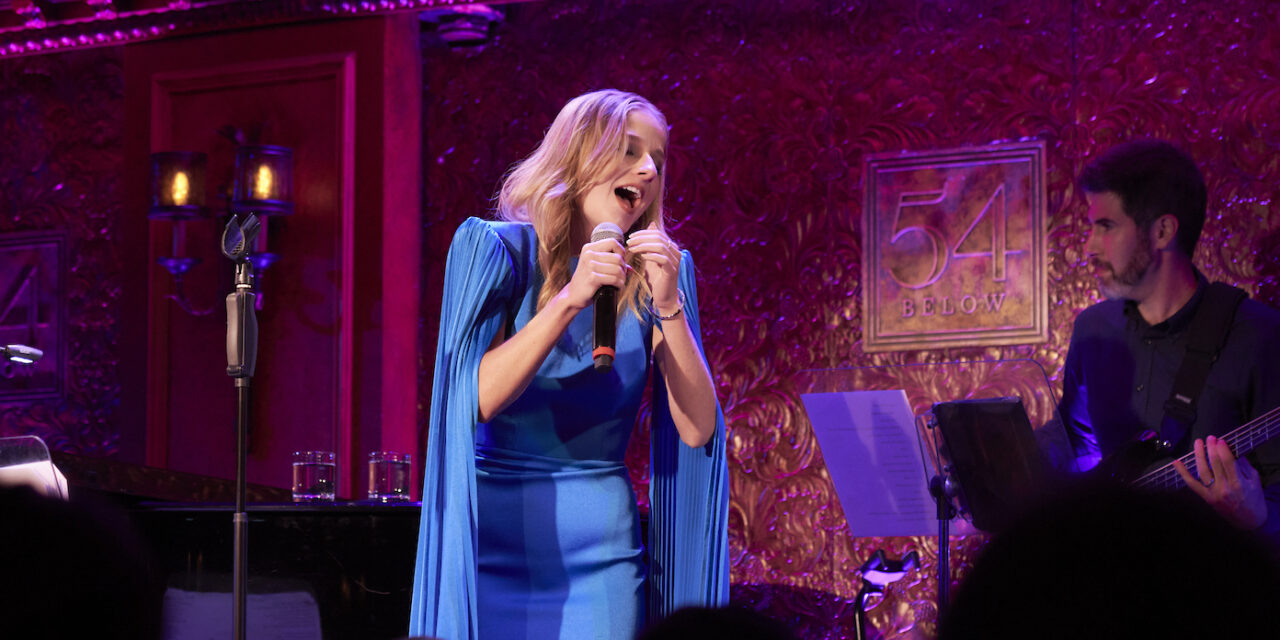 Cross-over vocalist Jackie Evancho’s voice is like a super power. She’s been a world-wide success from age 10, when she first appeared on Season 5 of “America’s Got Talent.” There, a robust, mature voice emanating from a child, stunned anyone who heard her sing. But she’d already been taking voice lessons, had entered her first talent competition just shy of her eighth birthday and also had been performing locally in and around her native Pittsburgh. Initially her repertoire was classical. She gradually expanded into and conquered popular music. Her tone is as clear as a bell, as smooth as glass, and her range spectacular. The sum total of her vocal talent is amazingly nearly flawless.

Now 22 years old, Evancho has carved out a career mostly in recordings and concert appearances. At 54 Below on Sept. 14th, the singer was celebrating her latest album release, Carousel of Time, a cover of ten of Joni Mitchell’s best-known songs. She opened with “Both Sides Now,” explaining that Mitchell’s appeal to her is that each song is “a little piece of art.” As she progressed through the Mitchell songbook, “The Gathering,” “Urge for Going,” “A Case of You,” “Circle Game” and more, it was clear that Evancho identifies closely with Mitchell, whom she admires for her authenticity.

Authenticity was the name of the game for singer-songwriter troubadours, who had an ascendancy in the 1960s and 70s. Along with the likes of Judy Collins and Leonard Cohen, the music was about the poetry of the lyric. Singing those tunes requires the subtlety and understanding of that dynamic—which a generation or two of modern performers should take on board for their own authenticity. And so, while Evancho identifies, her mic, with much too much reverb, did the music no favors. She often wasn’t able to be clear in her enunciation, both in singing and delivering her narrative.

Wisely, Evancho tried to offset another “issue” of an entire meal of Mitchell: while melodic, her songs, like the output of the other troubadours of that era, are similar in mood and tempo—not so appealing, perhaps, to modern audiences. And so, she dotted the set with other numbers, such as a medley of Phantom of the Opera tunes, the score that awakened her as a young child and started her singing. She offered a hymn that was a favorite of her late, beloved grandmother, “How Great Thou Art” and ended with an encore of “O Mio Babbino Caro,” a familiar aria from Giacomo Puccini’s opera Gianni Schicchi.

Evancho is bright and ebullient and it’s clear she is not only passionate about singing, but about pleasing her audience. Yet, for an artist who wishes to go beyond the recording studio or the vastness of a concert hall, there’s a lot to learn about performing in the intensely intimate space of a cabaret room. Here is the test of connecting for anyone who treads these boards. The audience is practically in your lap; all flaws are instantly detectable.

At the core of her overall performance at 54 Below, is the need for a director to provide guidance about this specialized art form. Even though Evancho has attained the ripe old age of 22, being a child prodigy has its drawbacks, one of which is becoming a “commodity” and another is being given space by handlers to mature within a developing personhood. Seeming more like a teenager, the very likable Evancho in her enthusiasm is unfocused, and one wonders if, at times, she really understands the lyric she’s singing. The purity and perfection of her voice deserves to be carefully managed, as does the person behind that miraculous artistry, a sweet but also struggling human being (Evancho went public this summer about her ongoing struggles with anorexia). With so many more years ahead of her, we hope to see a confidant, anchored, mature Jackie Evancho conquer stages both big and intimate.