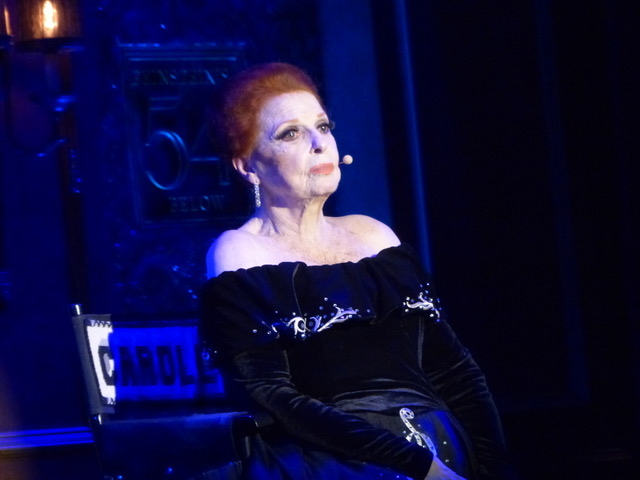 Carole Cook, looking like a wealthy, handsome woman in her early ‘60’s, steps up on the dais of Feinstein’s/54Below on the arm of a handsome young man, strolls unaided past her music director Christopher Marlowe’s grand piano and wiggles into a waiting Director’s chair. She smiles broadly at the packed showroom and says with a sigh, “Oh, to be 90 again!” An honest opening which receives the expected tsunami of laughter. “At my age,” continues the impish Lucille-Ball-look-a-like, “Playing 54 Below is not a career move. I have jewelry bigger than this room.” She waits for the second roar of laughter to subside before warning us, “None of you paid enough to criticize anything I do.”

Granted, the 94-year-old Carole (ne Mildred Francis) Cook is no frisky 90-year-old kiddo like Marilyn Maye, so don’t expect high kicks, but finding any flaws in her performance is a lost cause, even for a Kitty Kvetch. Carole’s immensely entertaining. A handful of songs, both poignant and hilarious, mingle with and illustrate her observations and recollections. Her full-throated singing produces open-mouthed wonder. Her tell-all tales about her life are exquisitely timed and artistically crafted. She delivers elegant concepts with tell-it-like-it-is, devil-may-care blue-collar disdain. Feinstein’s was completely sold out on both nights of her booking, the waitlist filled with eminent theatrical cognoscenti. One might well wonder to whom one had to do what in order to attain a spot on which to sling one’s rump. It’s actually very simple. Make your reservation as soon as you hear she might be in town. Mildred Frances Cook – a moniker without a smidgen of pizzazz — was born in Abilene, Texas, and saw her first Barnum and Bailey Circus in Dallas when she was five. She remembers an abundance of “tits and glitter,” and quickly realized she would be able to handle that. Her interest in performing was further piqued by watching stars like Mary Martin and Helen Hayes touring in Broadway hits. Her parents insisted she get an education, so she earned an M.A. in Greek Drama. When she was ready to move to NY, she claims “the townspeople bought her a one-way ticket on an unchartered bus.”

Her first New York City job? Counting and boxing brassieres for the Mardi Gras Bra Company. Cross “tits” off the list. On to “glitter.” Her first song which illustrates her callow youth is a Cy Coleman and Dorothy Fields up-tempo showtune, “Nobody Does it Like Me,” from Seesaw.

After auditioning for everybody and anybody, the still Mildred Frances Cook was cast in a hit show. She replaced Charlotte Rae as Mrs. Peachum in Threepenny Opera. Her first night club act received the following review from an agent that she paid to see it. “I don’t know how to tell you this, but you’re rocking a dead baby.” Fortunately, rejection did not deter her. She won a talent contest at One Fifth Avenue and was hired to work there.

While playing summer stock, she was invited to join a repertory company which took classes and worked together and (drum roll!) was owned by Desilu. Lucille Ball was 23 years older than Mildred Frances but they looked enough alike to be sisters and became close friends. Mary Francis reminded Lucy of her friend Carole Lombard because they shared a similar disdain for anything they didn’t like. Lucy suggested Mildred Frances become Carole. She became Lucille Ball’s protégé and had a flourishing career in films and TV.

Robert Osborne, her classmate at Desilu Rep, turned her into a cougar when he introduced her to the four years younger than she Tom Troupe, an always gainfully employed stage actor. Osborne was best man at their 1964 wedding. Matron of honor was Lucille Ball. In retrospect Carole considers that “A bad choice because no one looked at the bride.” Carole proudly reports that in the 54 years she and Tom have been married, she never once thought of divorcing him because she always felt murdering him would have been a better solution.

I won’t say another word because I don’t want to upstage the show, but Carole talks about her biggest breaks, starring in Hello Dolly for two years in Australian and New Zealand, working with David Merrick and Gower Champion in 42nd Street and her friendship to Ethel Merman. Her closing number, “Before the Parade Passes By,” from Hello Dolly melted every heart and sent out universal wishes to the universe to keep Carole Cook leading the parade for many years to come. Richard Skipper, who produced her show with Russ Woolley, continues to book this show.

“What if I can’t appear?” she asked him. Richard, who knows every word in Carole Cook’s script retorted: “Well, then I’ll do it,” he assured her.

Carole Cook didn’t take that sitting down and warned him, “If you’re better than me I’ll come back to haunt you.”

Now that’s what I call a trooper.

Carole invited the entire audience to join her at Sardi’s. I believe practically everyone did. She proved that she had the patience of a saint, sitting for selfies with everyone one in the room who wanted one. It was a really grand party, but not as grand as watching her perform. 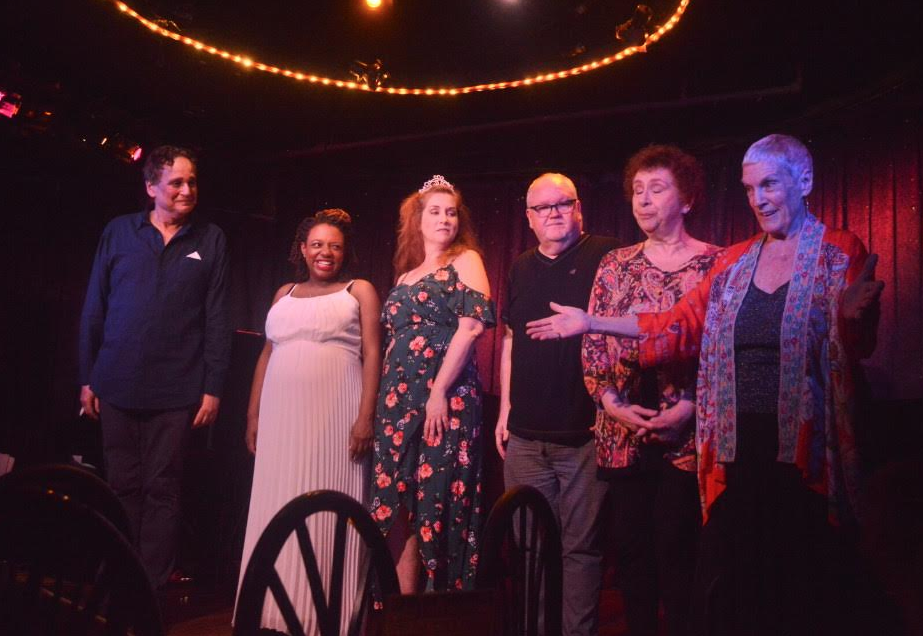 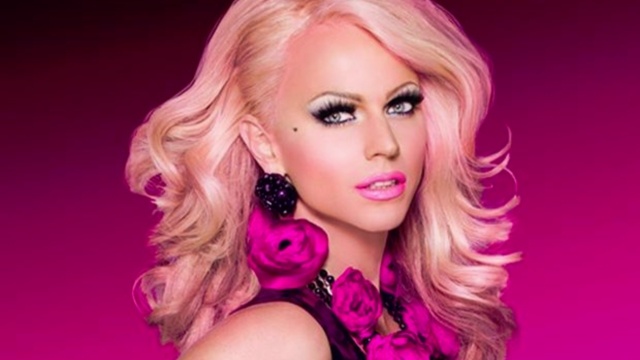 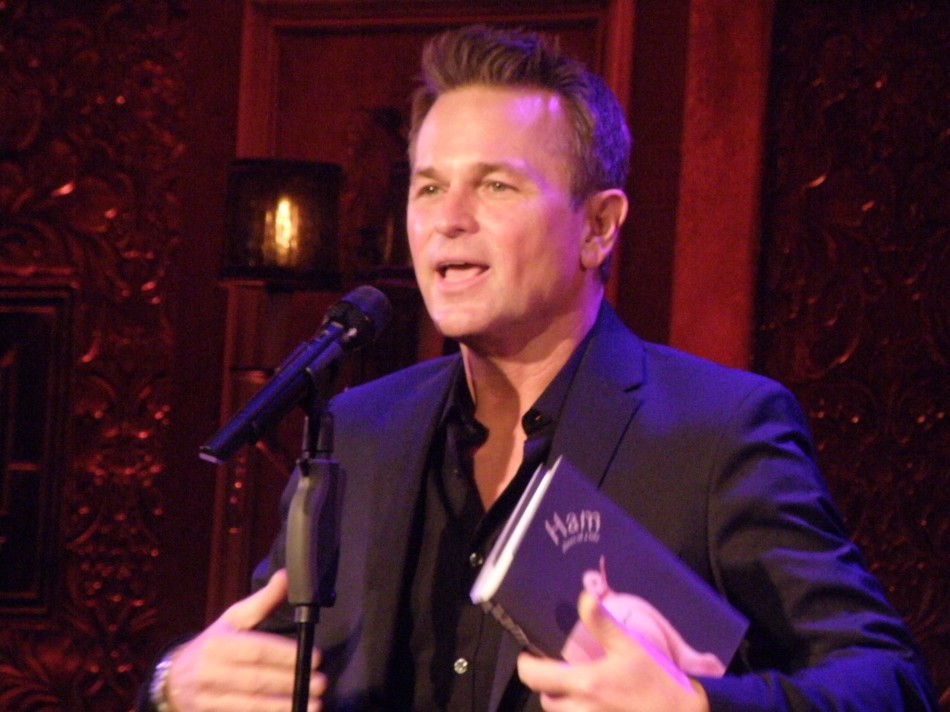 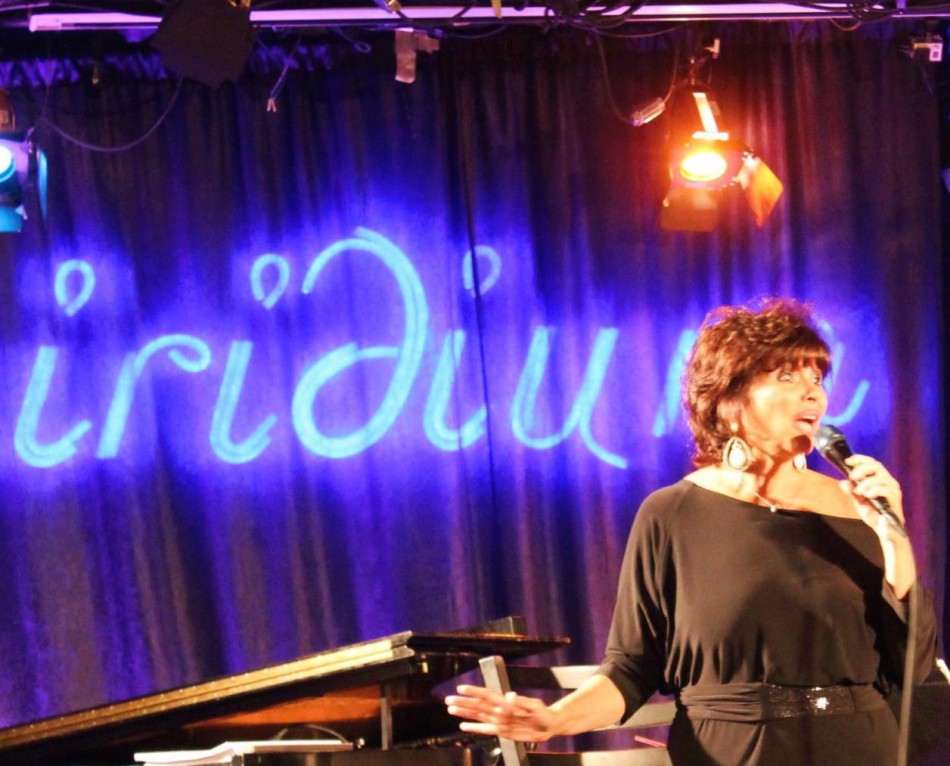