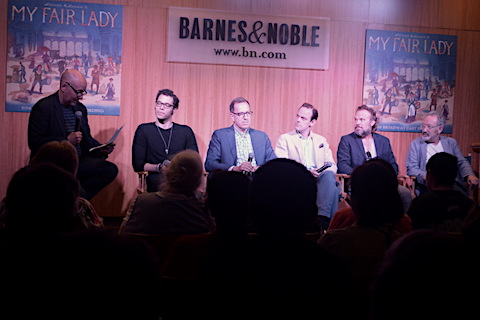 Barnes and Noble presented the CD Signing and presentation of the newly released Lerner and Loewe MY FAIR LADY revival on the Broadway Label.  (first revival after Melissa Errico and Richard Chamberlain in 1993)  The original opened in 1956 at Lincoln Center with Julie Andrews, Rex Harrison and Stanley Holloway. The men of Eliza Doolittle were present.  Sadly Lauren Ambrose could not be there.

A talk with Harry Hadden-Paton, Professor (Henry Higgins), Norbert Leo Butz (Alfred P. Doolittle), Allan Corduner (Colonel Pickering) and Jordan Donica (Freddy Eynsford -Hill), and musical director Ted Sperling was hosted by Steven Sorrentino. After the talk, Shereen sang “On the Street Where You Live,” a song that they wanted to cut from the show but which Alan Jay Lerner insisted remain in the show. CD’s were signed after the presentation.