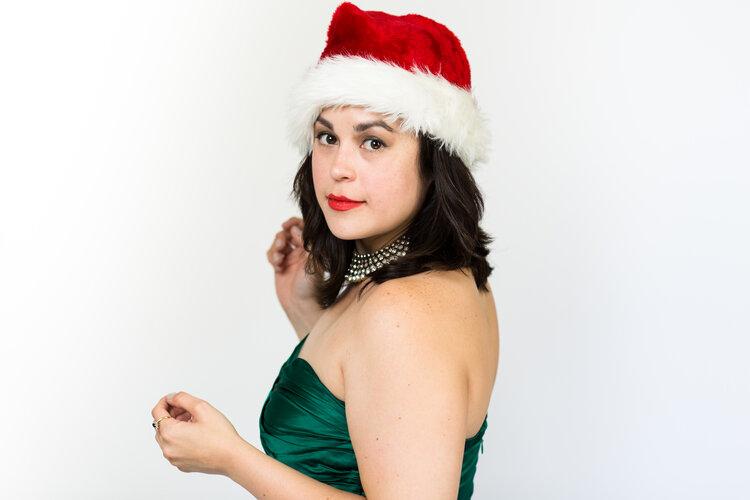 The enormously talented pianist/vocalist/composer Champian Fulton and her trio opened her four-night holiday residency at Birdland with her Christmas with Champian, with sets comprised of both Christmas and jazz standards. For this series, Champian was accompanied by bassist Hide Tanaka and drummer Fukushi Tainaka.  The opening night’s set was filled to capacity.

The young Oklahoma native brings a wholesome, fresh-scrubbed demeanor along with the edge of an accomplished jazz cat.  The daughter of jazz trumpeter and educator Stephen Fulton, Champian’s sound and playing style reveals her many influences to the discriminating ear.  As a singer, imagine if Doris Day were the love child of Dinah Washington and Joe Williams.  She is a tremendously appealing artist.

Champian arrived to the stage wearing a festive emerald dress.  Mr. Tanaka, in a red dinner jacket, helped complete the Christmassy look. The trio opened with a swinging “White Christmas.”  Champian next turned to one of those “since my man has gone” kind of blues numbers, “Evenin’,” a 1934 tune by Harry White and Mitchell Parish.  Her playing style here was reminiscent of Nat King Cole’s.  She dove further back in the Tin Pan Alley catalog with “I Cried for You,” playing it through solo, in a slow and sexy rubato, before the band kicked in with a fast shuffle swing.  With bow in hand, Mr. Tanaka turned his double bass into a giant fiddle, playing with an eighth-note frenzy.  Using the bow itself as a percussion instrument, he tapped the strings and created a unique sound, while Mr. Tainaka’s powerful drumming gave the piece even greater urgency.

The star dedicated “Jingles the Christmas Cat” to her friend, the late Freddy Cole, who popularized the Ray Elbert Parker tune.  A song about a Christmas cat played by three cool cats?  Not too shabby.

Champian heard that actor/pianist Jeff Goldblum loves her rendition of the Christmas song “Pretty Paper,” a country waltz by Willie Nelson, and might record it, giving her hope that Willie himself will hear her arrangement.

Champian, who is of Hispanic heritage but is not fluent in Spanish, recorded “Gracias a Dios” at the request of her grandmother.  She confessed to being nervous about singing it in Spanish.  Though she learned the song from an Eydie Gormé recording, her voice here, sweet and unadorned, had a similar timbre to that of Doris Day.  She had nothing to be nervous about, to this gringo’s ear – it was beautiful and sounded authentic.  The lovely ballad’s arrangement had a vibe out of the Guys and Dolls Cuban scene.

In her traditional jazz take on “Winter Wonderland,” Champian’s playing was reminiscent of Erroll Garner’s.  An amusing moment came in the form of Hide Tanaka’s “Salt Peanuts” bass quote.  “Pianist Champian” felt it was time to give “singer Champian” a chance to “take five,” offering up an exquisite pair of original instrumentals.  The first, “Happy Camper,” a Dave Brubeckian number with complex drum rhythms and a deceptively simple but strenuous bass repetition.  This number gave the trio quite a workout.  The second, “I Don’t Care,” could have come from a Henry Mancini soundtrack.  Mr. Tanaka was given an extended solo that utilized deft unison playing and creative, playful bass motifs.  It was simply sensational work.

A Christmas medley that included “The Christmas Song” and Vince Guaraldi’s “Christmas Time is Here” (from A Charlie Brown Christmas) closed out the set, and a strong demand for an encore produced a lovely “I Only Have Eyes for You.”

As always, the Champian Fulton Trio gave a terrific performance with a fine choice of songs.  There are six remaining sets through Christmas Day.

Champian Fulton: Christmas with Champian took place on December 22 through 25 at at Birdland Theater, 315 West 44th Street between Eighth and Ninth Avenues (www.birdlandjazz.com).