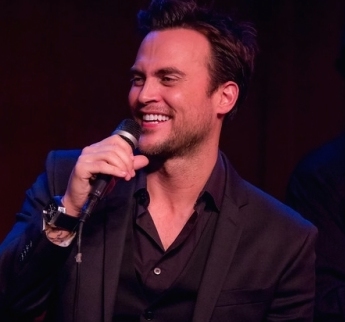 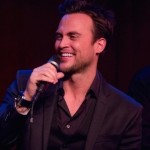 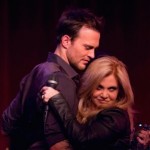 Cheyenne Jackson — now there is eye candy and ear candy for any stage.  He made a splash in 2009 on Broadway with All Shook Up, and he’s been shaking up fans from then on, appearing in concert halls, theaters, nightclubs, television (Under the Candelabra) and films (United 93).  In an early springtime stop at Birdland, Jackson featured original music from his debut full-length album, I’m Blue, Skies.  The title song states the aim of this work.

This all-around entertainer from northern Idaho, moves with grace, is comfortable on the stage and chats with the audience with an off-beat humor that grows from a core of soul-searching.  Jackson’s tone is clear, his lyrics distinct and his delivery honest.  The CD comes after a period of personal struggles that are embodied in the songs.  “Mr. Lonely Boy” has the bluesy feel of trying to break through the curtain of despondency, but the upbeat title song, “I’m Blue, Skies,” is rhythmic and catchy, an explosion of optimism of a man on his way.

Not everything in the show was from I’m Blue, Skies.  After a perceptive version of Katy Perry’s, “Teenage Dream,” Jackson introduced his special guest, the “powerhouse” blonde, Orfeh, for a duet of “Something Stupid” (C. Carson Parks), a ’60’s hit for Frank and Nancy Sinatra, embroidered with some cha-cha moves.  Orfeh followed this with a rocking revisit to the Jackson 5’s “I Want You Back.”  Cheyenne’s own intro of a little hip action led into a look-back at All Shook Up with, “A Little Less Conversation (A little more action, please).”

Jackson was backed by a high-powered trio featuring Ray Kilday on bass, Steve Bargonetti on guitar, Ray Marchese on drums and led by music director/pianist, Ben Toth.  Jackson performed an original song by Toth to the words of Sylvia Plath and orchestrated by Don Sebesky, “Mad Girl’s Love Song,” with Plath’s recurring line, “I think I made you up inside my head.”  Kilday added his bass for an haunting aura.  With Toth, Jackson also performed a standard style holiday tune they had recently written, “Squeeze Me, It’s Christmas.”

The versatile Jackson included a salute to Joni Mitchell’s pictorial, “A Case of You,” and brought his falsetto to Sam Cooke’s “A Change Is Gonna Come,” a song eventually used in the civil rights protests.  While Jackson’s rangy repertoire did not include the many show-tunes he has performed, his encore was a sincere, “What a Wonderful World” paired with “Auld Lang Syne.” (This is a voice that could have eliminated the microphone here for a more intimate cabaret sound.)  Still, raise your glasses to the talents of Cheyenne Jackson.

Cheyenne Jackson is appearing in the cast of City Center Encores!’ current production of “The Most Happy Fella.”