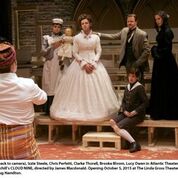 In deepest Africa, at the pinnacle of the British Empire’s might, Victoria rules supreme. But in Cloud Nine, Caryl Churchill’s bifurcated comedy being revived at the Atlantic’s Linda Gross Theater, Victorian values are saluted in song but perverted in practice by colonial administrator Clive and his extended family.

They’re a randy bunch, and who can blame them? The women are cooped up all day, and the men – well, boys will be boys – or not.

While Clive and the actor playing him, Clarke Thorell, are of the same gender, Clive’s wife, Betty, is played by a man (Chris Perfetti)) and his young son, Edward, by a woman (Brooke Bloom). His young daughter is a doll.

Clive has been having an affair with their widowed neighbor, Mrs. Saunders (Izzie Steele). Betty is involved with explorer – houseguest, Harry Bagley (John Sanders), who also gets physical with young Edward and with Joshua, the black manservant played by Sean Dugan, a white actor.

But when Bagley makes a pass at Clive, it’s his undoing. Clive decides he needs a wife and pairs him up with Ellen (also Izzie Steele), the governess, who carries an unrequited torch for Betty.

The only character outside the sexual loop is Maud (Lucy Owen), Betty’s widowed mother. Dour, sour, and universally disapproving, she’s a humorless but humorous beacon of musty virtue.

The cast, under James Macdonald’s direction, forms a close-knit comic ensemble. Dialogue is delivered in italics but always with a light touch. The satire in the writing needs no buffering from the actors.

Costume designer Gabriel Berry is in sync. Betty’s simple ivory dress, accenting her pasty complexion, stands in striking contrast to her mother’s satiny widow’s black, each exaggerated but quietly so. Nor is this drag queen territory. Betty wears little or no makeup and her movement, while feminine, is demurely so.

And therein lies the genius of the play’s first act. Nothing is overdone except the basic concept. It’s hilarious. 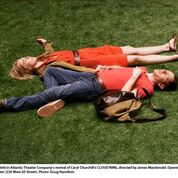 Act II brings a seismic shift in geography, time, and tone. It’s 1979 London. Three of the first act characters are still with us, including young Victoria, the doll, now a young woman played by Lucy Owen. Betty is now played by Brooke Bloom, and Chris Perfetti is Edward, a gay young man. Only twenty-five years have passed for these characters, while the world has aged considerably more since Act I.

Cloud Nine’s1979 is generally more naturalistic than its Victorian era counterpart. Thorell’s playing Cathy, who can’t be more than five or six, is the exception, and it’s an awkward one. Thorell captures the spirit and mannerisms of a little girl, but his size and unfortunate pigtails make the device artificial rather than artful. It’s heavy-handed, neither funny nor enlightening. 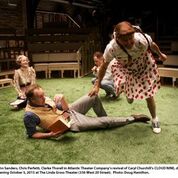 And the playwright’s London is not nearly as entertaining as her Africa. Its story lines, a gay male love affair and a gay female love affair, are fine but not remarkable. Betty seems to come to terms with her male and female selves, which satisfies symbolically but offers little excitement. The most amusing aspect of the play’s second half is Sanders’s over-the top Martin, constantly spouting politically correct platitudes in support of his wife Victoria’s exploring her womanhood.

Macdonald has chosen to convert the Linda Gross into a theater in the round by constructing (unfortunately uncomfortable) bleachers. This works well throughout, but especially in the first act, where it allows for secret sexual shenanigans during a game of hide and seek to take place front and center.

Much of Cloud Nine is a Feydeau farce without doors. It’s a shame it flattens as it progresses, but it’s still a memorable jumble of sex and sexuality, no doubt less shocking than it was thirty-five years ago but still fresh.

Through Sunday, November 1, 2015 at the Linda Gross Theater (336 West 20 Street). www.atlantictheater.org. 2hrs. 40 minutes with one intermission.