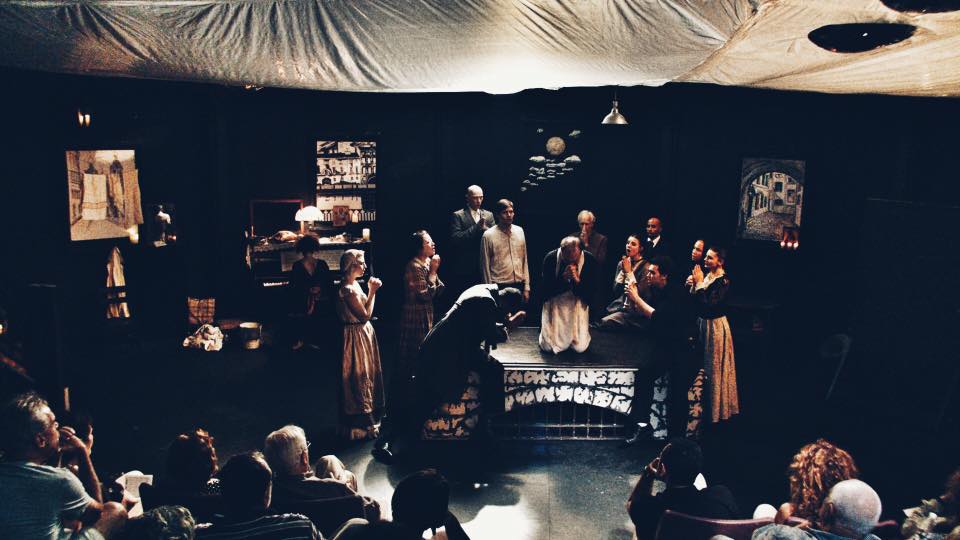 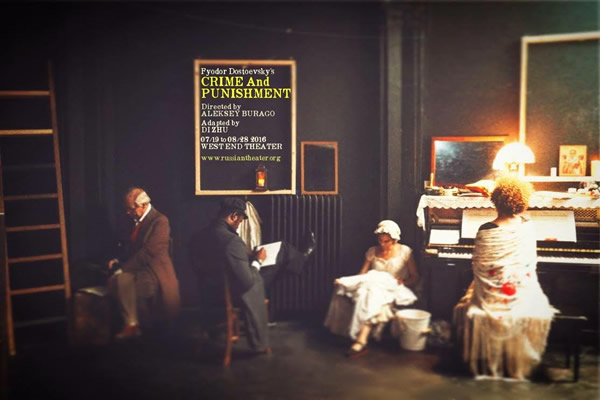 The Church of St. Paul and St. Andrew stands imposingly against the Upper West Side. Inside waits the spirit of Dostoevsky as the Russian Arts Theater & Studio prepares their nightly performance of their adaptation of the literary genius’s magnum opus, Crime and Punishment. Inside, a massive white tarp hangs over the house with a beautiful blue sky projected onto it. With cool air blowing from the rafters, the scene is set for 1860s St. Petersburg.

The classic, chilling tale is adapted by Di Zhu (who also plays Sonya Marmeladova), who brings page to the stage with a 14-member ensemble. Despite the textual challenge, her smart adaptation brings out the natural drama of the source material. In tandem with the direction of Aleksey Burago, the interpretation is an admirable one, and the scenes therein hit all major plot points while retaining its original comprehensiveness, humor, and heart.

From start to finish, the large cast forms a cohesive unit, dressing the background of scenes with the characters’ reactions to the central action. The greatest magical and validating moments of the adaptation shine most when the ensemble moves in patterns, dances, sings, and creates visually powerful tableaux. All the actors are admirable in their performances, but there are a few standouts.

David A. Russell (Rodion Raskolnikov) is effective as the protagonist, playing off the eccentric qualities of his fellow actors. Luisa Menzen (Dunya Raskolnikova), is enchanting as the sister of Raskolnikov, making adept transitions between familial love and the romantic love of her suitor. Ingrid Wheatley (Nastasya Petronova) as the lusty servant to Raskolnikov, is a jolt of energy whose portrayal is more clever and skilled than she lets on. Not only does Di Zhu excel in the adaptation, her performance reveals another one of her many talents. As Sonya Marmeladova, she acts with range and purpose, jumping from moments of loving tenderness to frightful religious fervor.

Michael Donaldson (Porfiry Petrovich) and Jim Boerlin (Arkady Svidrigailov) feature some of the best physical aptitudes of the night. The former is subtle and venomous as the Investigator, and the latter portrays the old man who swings his cane with impressive capability. Perikles Mandinga (Dmitri Razumikhin), as the friend of Raskolnikov, adds a welcome dose of companionship and warmth. The presence of his slight Portuguese accent thankfully serves his character, rather than distracts.

In the aforementioned sky tarp are transparent holes which are utilized by Lighting Designer Conor Mulligan, through which the higher-hanging lights are shot through the holes and onto the stage. Unfortunately, these tended to be more of a hindrance, leaving some scenes in the literal dark. Thankfully, Technical Design by Joseph Arnow and Set Design by Aleksey Burago allowed set pieces to be rolled, separated, and transformed with ease, allowing the actors to quickly react to the technical components.

Adaptations of this sort are not an effort to be taken lightly. Despite the audacity of the undertaking, Mr. Burago and Ms. Zhu’s Crime and Punishment goes the distance, bringing a revitalized perspective to this classic tale.

Crime and Punishment. Through August 28 at The West End Theater at the Church of St. Paul and St. Andrew (263 West 86th Street, between Broadway and West End Avenue). www.RussianTheater.org 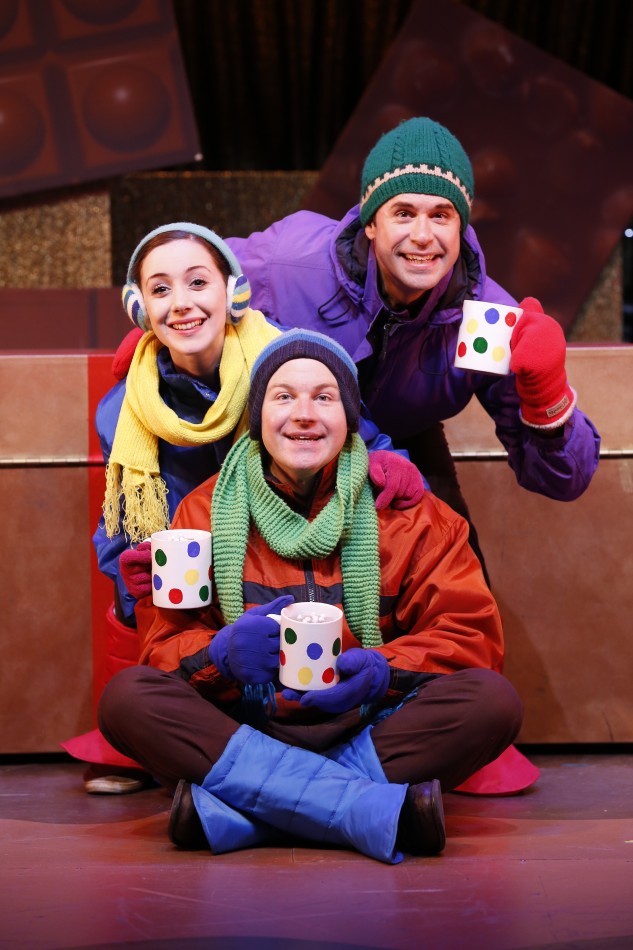 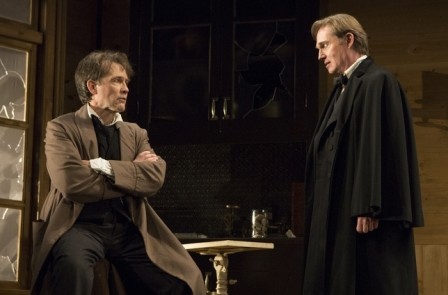