DARLENE LOVE: LOVE FOR THE HOLIDAYS 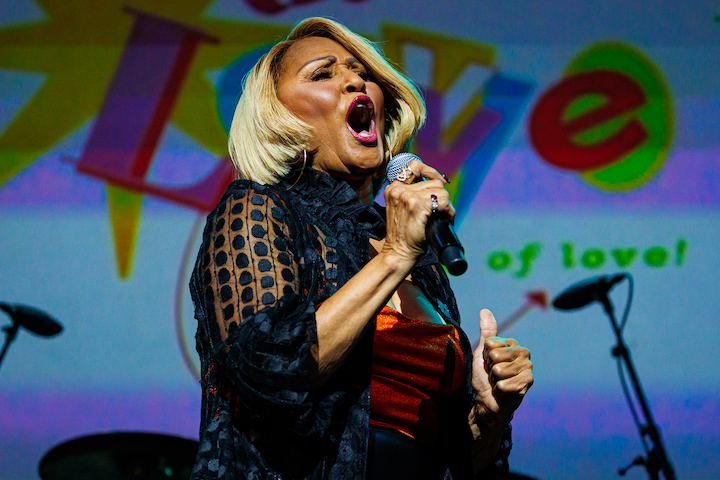 After leaving The Town Hall on Saturday night, I had to double-check that the roof was still intact. Because if anyone could literally raise it, it would be the incredible Darlene Love, impossibly gorgeous at 80 and still possessing the same powerhouse voice that has thrilled audiences for nearly 60 years, helping to earn her such honors as an Oscar, a Grammy, and induction into the Rock & Roll Hall of Fame.

And even though Love claimed that she never imagined that she’d still be performing live at age 80, her remarkably strong vocals and her infectious personality were happily on display during Love for the Holidays,the latest variation of her annual holiday show – one that has previously played such New York City venues as the Bottom Line, B.B. Kings and Sony Hall for many decades.

While the contagious Omnicron virus and some inclement weather may have kept some ticketholders away, everyone who showed up got a true, never-to-be-forgotten Christmas present a few days early. Over a two-act, two-hour program, Love – backed by seven extraordinary musicians and three superb background singers – served up an eclectic and electrifying program that primarily paid tribute to her storied career.

Naturally, there were joyous renditions of three cuts from the classic 1963 album, “A Christmas Gift to You from Phil Spector,” including “Marshmallow World,” “White Christmas,” and, of course, her now-signature song “Christmas (Baby Please Come Home), which became a staple of Late Night with David Letterman for almost 30 years – and which sent audiences out of Town Hall on a high note in every sense of the word.

Love also delighted her fans with “All Alone for Christmas” (which she sang for the film Home Alone 2); “Rockin’ Around the Christmas Tree,” (which she recorded in 1992 with good pal Ronnie Spector), and two classic 1960’s girl-group tunes “Da Doo Ron Ron” and “He’s a Rebel” (which were actually recorded originally by Love and her group, The Blossoms, but attributed to The Crystals, who were more famous).

She also wowed the crowd with a pair of soulful ballads from her cheekily titled 2015 album “Introducing Darlene Love”: “Forbidden Nights” (penned by Elvis Costello) and “Night Closing In” (written by Bruce Springsteen); she also repeatedly thanked the album’s producer and arranger, the great Steven Van Zandt, who convinced her to move permanently to New York in the 1980s.

To open the second act (and give herself a bit more downtime), she handed the microphone to singer Milton Vann, who took us to church with an extraordinary version of “O Holy Night” and, shortly after, brilliantly duetted with Love on two ultra-great pop classics, “Killing Me Softly” (made famous by her friend Roberta Flack) and “You’re My Soul and Inspiration,” which The Blossoms recorded just a few years after that timeless song was made famous by The Righteous Brothers.

Soul. Inspiration. There are no more fitting words in the English language to describe Darlene Love. Next time she plays in your town, don’t let anything stop you from witnessing her greatness.