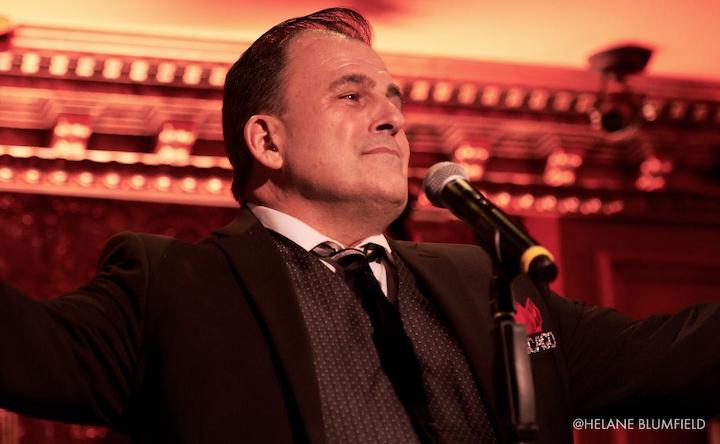 Actor-singer David Sabella has memories—many memories about the Kander and Ebb musical, Chicago, in which he starred as Mary Sunshine in the ongoing revival. As a young teenager he heard the cast album of the original, which ran from 1975 and closing after 936 performances in 1977. Taken with it, he knew instantly he wanted to play that particular role—and so, a dream was made manifest.

How else to musically describe Sabella’s path from teen fan to Broadway star than with an exuberant “Yes” (70 Girls 70). This song at the top of 25Chicago25 laid the foundation for the singer’s life journey and his basic positivity even in rough patches, i.e. during the adoption process that ultimately gave him and then husband, the late Thomas Mills, two beautiful daughters, Iraina and Faith. In every way, 25Chicago25 masterfully interwove Sabella’s Chicago story with many other enthralling memories. Each of the John Kander and Fred Ebb numbers were smartly integrated into the narrative, making a cohesive storyline.

Sabella auditioned for the City Center Encores production (May 1996), telling a story about that experience, filled with humor and expectation, plus offering a wry “All I Care About is Love.” Not the least of Sabella’s many talents his is vocal range. He’s a tenor, but also a male soprano, who can sing a mean falsetto to boot. He displayed those amazing abilities in “Those Come Hither Eyes” (Jerome Kern, Schuyler Greene, Cousin Lucy). 25Chicago25 was also full of fun facts, not the least of these being that the characters in Chicago were based on real 1920s personages. Mary Sunshine, for example, was based on female impersonator Julian Eltinge, a huge star in the first decades of the 20th century. During his run in Chicago, Sabella worked for two years with older brother, Ernie, who played Amos Hart. As a tribute to him he sang a beautifully executed “Mr. Cellophane.”

Special guest Jana Robbins was a treat. She offered a number she’s dreamt of doing from Cabaret that’s sung in that show by Fräulein Schneider—”So What?” Amusing cynicism carried over with Sabella in a duet to “You Know Me,” a cut song from The Visit that was both comical and perfectly vicious .😀

At show’s end, with “Razzle Dazzle/Nowadays,” it was clear that Sabella had ticked all the boxes of a perfect cabaret show. On a platform of good will, natural likability and sincerity, he built a thrilling exposition of story and song, wonderfully paced with attention to detail, nuance and delightful humor. Sabella is an educator and coach in addition to his career as a vocalist and actor. The former is no small part of his life, and in 25Chicago25 he more than proved he walks his talk.

Providing musical support for 25Chicago25 was a first-class trio of musicians who opened the show with a high-energy “Overture/Looping the Loop.” Jonathan Michel was the sturdy, steady bassist and Dan Gross the drummer, whose augmented drum kit allowed him to insert embellishments and riffs to add zest to the set list. Special props go to music director and pianist Mark Hartman, whose playing and arranging were inspired. To borrow a phrase from the sporting community, he was “in the zone,” and it was clear he was not only having a good time, but sincerely loving playing this show.