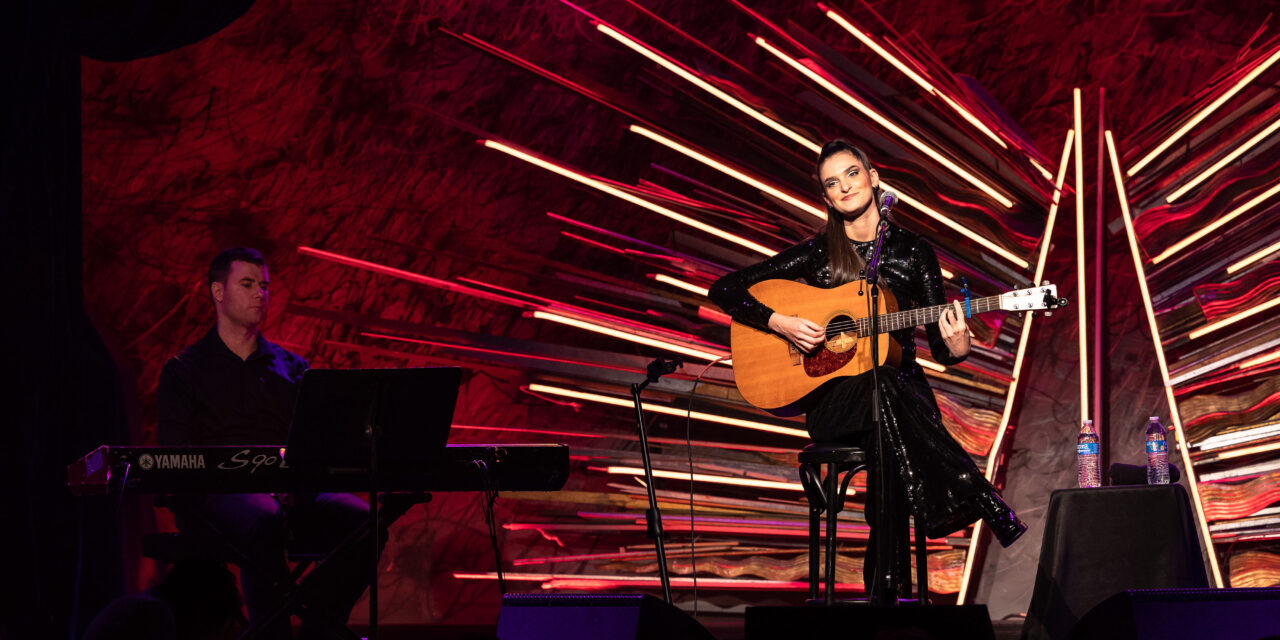 Actor, singer and musician Eleri Ward is a most unlikely pandemic success story.  Currently riding a meteoric rise to acclaim and stardom, Ms. Ward’s burgeoning career is a product of The Pause -the pandemic shutdown of New York in 2020.  With performing or auditioning possibilities, the young performer began developing folk/pop guitar arrangements of songs by the late Stephen Sondheim, recording them in a home studio in her closet.  With her help of a beautiful voice, a thoughtful approach to the source material, and her gorgeous, expressive eyes, her TikTok page went viral, quickly building a huge fan base.  Along her journey, Sondheim himself heard and heartily approved her songs, and singer Josh Groban was sufficiently impressed to invite Ms. Ward to open for him on his next tour.

This concert, which entirely packed the 500-seat Sony Hall, celebrated Eleri’s newest album of reimagined Sondheim songs, “Keep a Tender Distance” (Ghostlight Records) in advance of her 2023 tour.  She performed nearly all the album, as well as a several numbers from her first album, A Perfect Little Death.

The statuesque star, wearing a stunning black sequined gown, her long, dark hair pulled back, held center stage, sparingly accompanied on some songs by pianist Brian Fitzsousa.  For many numbers, she was solely self-accompanied on guitar.

Ms. Ward opened with “Stay with Me”, from Into the Woods.  The lovely song set the tone for an evening of primarily melancholy and introspective ballads.

Eleri brought up her first guest, Broadway star Samantha Pauly, for a delicious duet of “Unworthy of Your Love” (Assassins).  Ms. Ward, new to her stardom, was positively giddy that Ms. Pauly agreed to join her.  Their voices seemed perfectly matched, making for sumptuous harmony.  “We have a couple of sad songs in a row,” the star announced somewhat apologetically, before singing the oddity “I Remember” (Evening Primrose) entirely solo.

The program took a lighter tone when musical theatre star Jennifer Simard came up for a gleeful duet of “Agony” (Into the Woods).  Ms. Simard was a last-minute replacement for featured guest Laura Benanti, who became ill before the show.  “It really is my honor to be Laura’s understudy.  I’m sorry, wonder-study,” said the singer, who confessed to bringing a cheat sheet for the song.

There are times when Ms. Ward’s voice can break your heart.  Always, she touches, as in “Every Day a Little Death” (A Little Night Music), the first song she arranged in her bedroom.  “I had no idea I was doing something that would change my whole life,” she told the crowd, clearly moved by her reception, and “really, really grateful” for all that has happened for her.

Eleri’s emotional connection and acting ability were never more apparent than in “Not a Day Goes By” (Merrily We Roll Along).  Her singing in this fast folk waltz was spectacular.  She dedicated “Loving You” (Passion) to Donna Murphy, who won the Tony for her role as Fosca in the show.

Actress Julia Murney joined Eleri for a terrific duet of “No One is Alone” (Into the Woods).  Another Eleri Ward trademark is the intentional lack of closure in many songs. .  Her arrangements often trail off, or end with an unresolved chord, which creates a tension, a hanging feeling, and this approach seems quite effective for her.

Perhaps the biggest highlight of the program was her brilliant duet of “Move On” (Sunday in the Park with George) with actor Bobby Conte (most recently seen on Broadway in Company).   This was, Ms. Ward said, her personal favorite song on her album.  The tall, handsome Conte has a mellifluous and magnificent baritone with a tenor range that is goosebump-inducing.

The star described “Move On” as “our eleven o’clock number” and would have been the closing song, but for an insistent ovation.  She topped off the program with “Marry Me a Little” (Company).

Vocally, Ms. Ward possesses a beautiful, powerful voice, often mixing chest voice and head voice liberally throughout a song – she has a distinctive break, which she uses as something of a signature sound somewhat reminiscent to that of the late Dolores O’Riordan of The Cranberries.  This lends a sense of yearning to her singing.

Eleri Ward is an accomplished guitarist whose deceptively simple style serves to support her singing and arrangements.  She primarily fingerpicks, strumming when called for, with thoughtful chord choices and lovely voicings that give depth and beauty to the arrangements.  With her long fingers, barre chords are easily played, and her rhythm and timing exceptional.  She rarely, if at all, missed a note, and took only the occasional glance at her hand positions.

It is instructive to read Eleri Ward’s mission statement on her website (eleriward.com): “To develop new stories and break the mold.”  She has met and far exceeded this mission.  Brava!

Photo credits by  Rebecca J. Michelson except where indicated.