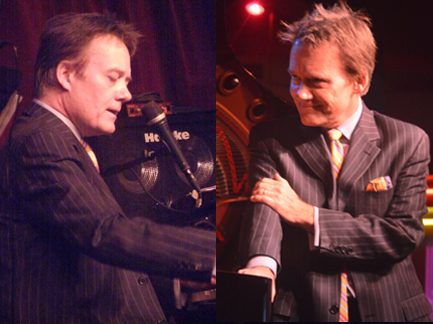 Eric Comstock takes the piano bench as if coming home. Without introduction, he eases into “A Hundred Years From Today” (Victor Young/Joe Young/Ned Washington) as if its thoughts were on his mind before he joined us, perhaps reflecting on a recent 12th wedding anniversary to vocalist Barbara Fasano. Bassist Jay Leonhart quietly plays and scats. It’s breezy, not insubstantial.

“The Great City” (Curtis R. Lewis) sidles in with hepcat arrangement: You’re caught in a whirlpool of east side cafes,/Where life is a cocktail of beads and berets!.. Vocal is part sung, part spoken, an approach Comstock often utilizes with success making lyrics conversational, adding dimensionality. Leonhart’s scat is sheer percussion. Two Rodgers and Hart numbers from the duo’s CD All Hart, include a chipper “How Can You Forget?” which features the winking lyric: …ringer, ringer ringer says the phone/bring’er, bring’er, bring’er back home… and to me, one of two evening highlights, a version of “This Can’t Be Love” wherein Comstock stands at the microphone while Leonhart becomes sole accompanist. For those of you living under a rock, Jay Leonhart is not only a seminal bassist but also one of our coolest scatters. It’s a simply wonderful arrangement, infectiously happy; completely original. Comstock epitomizes finesse. A second unexpected turn is the unique rendition of Leonard Bernstein/Stephen Sondheim’s “Tonight.” Instead of merely delivering the goods, Comstock treats us to a genuinely noteworthy interpretation. We begin slow and considered as if the performer is unable to take in what he’s feeling, then musically wander with vocal entering and exiting melody often off the beat. At one point, Comstock clasps his hands a few seconds, leaving the keys. It’s delicate, vulnerable; fresh. 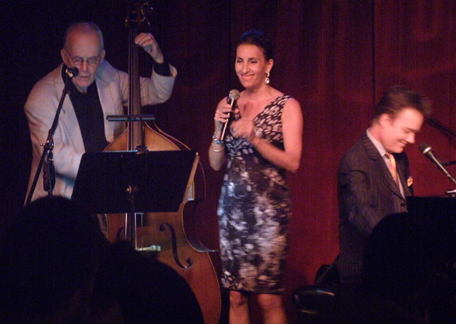 Special guest Barbara Fasano offers two songs from her current CD, Busy Being Free. “Photographs” (Alec Wilder/Fran Landesman) describes images the artist practically conjures, so immersed does she seem in each memory. Elongated notes eventually tie into a pleasing bow. Music sighs out. “As Long As I Live” (Harold Arlen/Ted Koehler) is a jaunty duet making every woman in the audience envy the couple’s deep rapport. 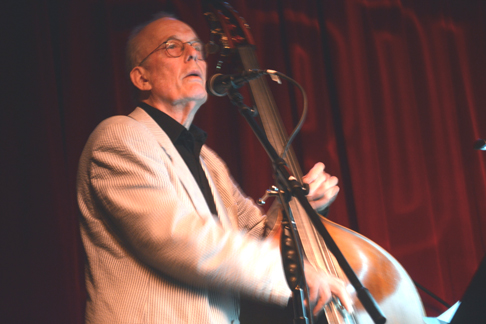 Leonhart sings two wry songs of his own composition, one about the difficulties of getting his bass aboard a plane and the other about serendipitously sitting next to Leonard Bernstein from New York to Los Angeles…becoming the best of pals/talking about life, art, death, root canals…of course, Lenny never called afterward.

…Pardon Miss my name is Snake/See that apple over yonder if you’ll take a bite/You and Adam both are bound to have some fun tonight… Comstock sings with pitch perfect, tipped-fedora innuendo. Bob Fosse choreography ghosts. (“Forbidden Fruit”-Oscar Brown, Jr.) Jule Styne/ Stephen Sondheim’s “Small Word” appears to be a sweet solo by the artist, but his piano has its own distinctive voice making the song sound like a duet between Comstock and his instrument. The familiar “Fireflies” (Francesca Blumenthal) shimmers.