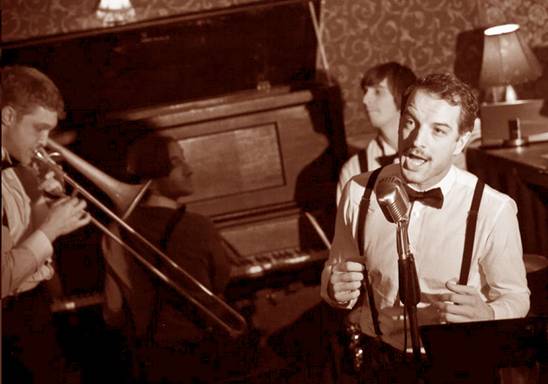 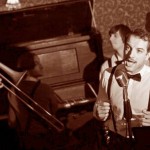 Mr. Morton and the six-piece jazz ensemble will perform a repertoire of turn of the century ragtime, 1920′s jazz and depression-era swing by composers such as Scott Joplin, Jelly Roll Morton and Duke Ellington.  Show times are at 7:00 PM and 9:30 PM (doors open 45 minutes prior to show time). Tickets are priced at $25-$35 (cocktails and light fare will be available, but there is NO food or drink minimum). Tickets are available now at http://www.brownpapertickets.com/event/537761.  Tickets are $25-$35 (no minimum).

Euan Morton, a native of Scotland, received an Olivier Award nomination for originating the role of Boy George in the musical Taboo. He moved to New York in 2003 to reprise the role on Broadway, earning Tony, Drama Desk, Outer Critics Circle and Drama League Award nominations, as well as the Theatre World Award for Outstanding Broadway Debut. His other New York stage appearances include Sondheim on Sondheim and the 2007 revival of Cyrano De Bergerac on Broadway; as well as the Off-Broadway productions of Measure For Pleasure at The Public Theater (2006 Obie Award), Tony Kushner’s adaptation of Brundibár at the New Victory Theatre, Howard Katz (opposite Alfred Molina) at the Roundabout Theatre, the 2009 American premiere of Leaves of Glass, and the Keen Company’s 2013 revival of The Film Society.  Regionally he has appeared in the historic Ford’s Theatre’s production of Parade (Helen Hayes Award, best actor), as well as in productions at the Signature Theatre in Arlington, VA; the Shakespeare Theatre in Washington, D.C.; Berkeley Rep; Kansas City Rep; Theatreworks in Mountain View; the Williamstown Theatre Festival and the Bay Street Theatre.  Euan can be heard on various cast recordings and released his debut solo CD NewClear in 2006, followed by Caledonia-the Homecoming in 2011. He has appeared in concert in New York City at the Oak Room at the Algonquin, Town Hall, Joe’s Pub, 54 Below, the Metropolitan Room, The Zipper Factory Theater, and Birdland, as well as at the Signature Theatre in Arlington, VA and The Kennedy Centre in Washington, D.C., and many other venues all over the country.

Grandpa Musselman & His Syncopators is a New York City musical group performing masterpieces from the first generation of jazz.  Founded in 2006 by trombonist Matt Musselman, the ensemble consists of Manhattan School of Music graduates assembled in a classic New Orleans configuration (trumpet, trombone, soprano saxophone, piano, tuba and drums) exploring vintage repertoire spanning 1900s ragtime to 1950s swing.  In 2007 they were selected for the Jazz Aspen Snowmass Academy where they rehearsed and performed extensively under the mentorship of Christian McBride and Loren Schoenberg.
They have since established themselves as a professional working band through performances at the MoMA, the Philadelphia Museum of Art, the Montauk Club, 54 Below, The Zipper Factory Theater, the South Street Seaport Museum, the Verdi Square Festival of the Arts, the Slipper Room, the Gershwin Hotel, Bryant Park, and Bargemusic.  As a result of their various gigs around the city they have developed several uniquely themed concerts programs which include Hotter Than That: The Music of Louis Armstrong’s Hot Fives & Sevens, Rockin’ In Rhythm: Early Ellington Classics, and In A Mist: Bix Beiderbecke and “Symphonic Jazz.”  Working as a show band, they have collaborated with burlesque and cabaret artists in productions such as Visions of Weimar with Daniel Isengart, Shanghai Nights with Shien Lee, and Big Banana Burlesque with Kristen Tabutt.  Through all their efforts, Grandpa Musselman & His Syncopators seek to re-establish jazz as a popular American music that can enrich the lives of all people.  The line-up is: Matt Musselman, trombone; Bryan Reeder, piano; Will Clark, drums; Russell Moore, trumpet; Vince Nero, saxophones; and Dan Peck, tuba.  Visit http://www.grandpamusselman.com/.