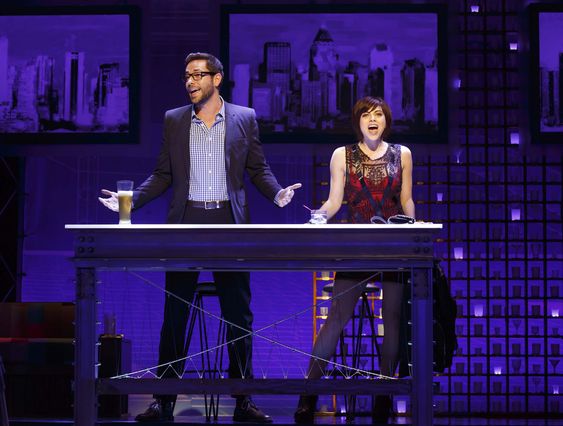 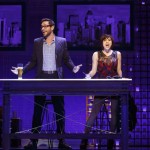 The dating scene nowadays is filled with strife, anxiety and, at best, is hit or miss, whether you meet someone online or are set up – blind date style as in this musical comedy at the Longacre Theatre on West 48th Street.

Take Casey (Krysta Rodriguez – Smash, The Addams Family) who’s a little rough and tough around the edges, is quite a looker, doesn’t exactly believe in a religion but acquiesces to a higher power and likes bad boys. Then there’s Aaron (Zachary Levi – NBC’s Chuck), a nice Jewish investment banker, who’s straight laced and has just come off a relationship – maybe a little more serious, as he was left at the altar.

They’ve been fixed up and meet at a restaurant, as the other 5 cast members playing multiple roles, become the Greek chorus of characters in Aaron and Casey’s heads, jumping up with much to say and sing as Aaron and Casey explore each other, Jewish geography style in a getting to know you “First Impression.” She immediately labels Aaron a BDV (blind date virgin) and he counters with BDS (blind date slut).

This is pure zany fun as everyone from Aaron’s sexy but frigid ex-fiancee Allison (Kate Loprest) appears to taunt him, as does his friend Gabe (Bryce Ryness) who warns him about mentioning the ex and surely not to order salad when they finally have dinner – just not manly (“salads are for pussies”). Deceased Grandma Ida (Sara Chase, who also plays Lauren – Casey’s married sister who is eager to get her professional serial dating sister wed) shows up in a very wacky “The Girl For You” – quick costume changes – with overlapping music/lyrics, as Granny hovers over them frantic that Aaron should not marry a goy. The multiple characters just keep popping up all over the place including Casey’s therapist (“blah, blah, blah – $200 please”), who is also the witty waiter Blake Hammond.

All the while, Casey’s cell keeps ringing and it’s her gay friend boy Reggie (a hilarious Kristoffer Cusick) keeping tabs on her in the reprised “Bailout Song” in case she needs an escape route from this date.  The “Awkward Pause“ and “The Check” offer up more humor as the newly mis-matched couple move from sparring to romance.

Rodriguez’ strong voice and delightful presence make her a winning choice as Casey, while Levi is just adorable as the bespectacled nerd-like clever Aaron, with a nice pop sound.

Austin Winsberg, the book writer, is a TV wiz with Gossip GIrl and Jake in Progress to his credit; the humor-filled music and lyrics are by Alan Zachary and Michael Weiner.

The brisk direction by Bill Berry keeps the talented cast moving so that the laughs are perfectly timed and keep coming at you with the additional creativity of Josh Rhodes’ musical staging. The set design is a well put together contemporary bar-restaurant with fun media design of a ticking biological clock to the credit of David Gallo. 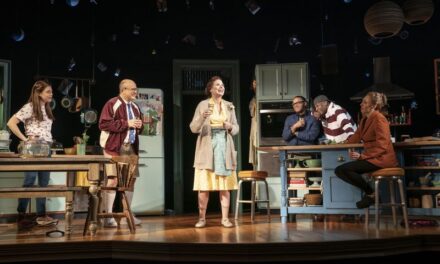