Forbidden Broadway is Back! 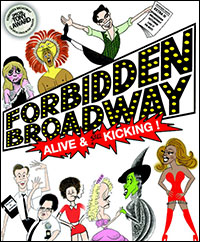 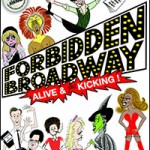 After a 10-month hiatus, Gerard Alessandrini’s FORBIDDEN BROADWAY, one of NYC’s best-loved and highly anticipated productions, happily returns to New York, beginning February 22nd at 8PM at the newly refurbished Davenport Theatre (354 W. 45th Street, Between 8th and 9th Avenues) with FORBIDDEN BROADWAY; Alive and STILL Kicking, featuring brand new takes on the shows that opened in Forbidden Broadway’s absence:  Pippin, Kinky Boots, Matilda and Motown along with highlights from last season’s acclaimed and very popular edition: Once, Evita, Newsies, Book of Mormon, among others.  Over the course of the spring, Alessandrini will continue to add new material to reflect the season’s openings, and unveil the new edition around the time of the Tony® Awards.

In a statement, Gerard Alessandrini said: “When we heard Les Miz was coming back for its third Broadway run, it was a wake-up call that it was time for us to resume. We just couldn’t rest in peace. So we’re picking up where we left off last April. And now feels like the perfect time to be back in New York: right in between seasons. There’s everything we didn’t get the chance to spoof last year, and a new avalanche of shows waiting to crash down on us. We’ll start with Pippin, Kinky Boots, Matilda and Motown, and as the season unfolds, we’ll add Rocky, Cabaret, Bridges of Madison County, Bullets Over Broadway, Aladdin, etc. Then we can officially open the new edition around Awards Season.”

The playing schedule for FORBIDDEN BROADWAY: Alive And STILL Kicking will be as follows: Mondays and Tuesdays at 7PM, Friday and Saturdays at 8pm, Sundays at 7:00pm, with matinees on Wednesdays and Saturdays at 2pm and Sundays at 3PM.  There is no matinee on Saturday, February 22nd.  Tickets are $29-$79. Premium Tickets are available at $110.Tickets can be purchased by calling Telecharge at (212) 239-6200 or by visiting www.telecharge.com.