The interesting background on this show gives it more panache than one would realize . . . it’s a little bit of this n’ that . . . written by a group of writers called The Grundleshotz – (i.e. Sebastian Arcelus, Fred Berman, Jay Klaitz, Bhavesh Patel, Michael Hirstreet, Jenna Coker Jones, Craig Jorczak, Nathan Kaufman, Emily McNamara, Jennifer Miller, Michael Tester) along with lead producer/writer Ken Davenport, with additional material by Sarah Saltzberg; the music and lyrics by Mark Allen. It’s not a complicated story, and it’s filled with upbeat music and a lot of sophomoric rhetoric that seems to please the audience as they spend more time than one can imagine laughing and guffawing. Maybe it’s just because it’s so silly! And who doesn’t need silly nowadays!

Here’s the scoop. Forty year old Mitch Papadopoulos (a standup kinda guy, Mitchell Jarvis) has been dumped from his job as a Wall Street broker and leaves the Big Apple to return home to Sayreville, N.J. and move back with his mother Sharon – a very sexy, svelt Marilou Henner. She’s almost the perfect Mom, reminiscent of Moms back when they used to bake cookies but this Mom is one sassy, appealing (pardon me) broad! So much so that she becomes the love interest of . . . (no, I’m not going to spoil this one.)

Best friend Bart Vickers (funnyman charmer Jay Klaitz) is now the local high school math teachrt – but Bart hated math! They chat up old times, the most memorable part being in the Band that won the esteemed Western Eastern Middlesex County Battle of the Bands. Now we’re talking not yesterday, but twenty years ago. Bart is serious when he tells Mitch he wants to revive their band Juggernaut, find the old band members and get it together. Mitch really isn’t into it all until the muscular, pain in the butt Tygen Billows (a very cool Brandon Williams), from the opposing band Mouthfeel, challenges Mitch to a battle of their bands. What’s at stake? The house that Mom and Mitch reside in. Seems that Tygen has had a very successful career buying up most of the town’s real estate and is about to foreclose on their house. Sully Sullivan (Paul Whitty) is now a police officer, while Rummesh “Robbie” Patel (Manu Narayan) is a dermatologist (about to be wed in an arranged marriage). But, alas, their guitarist has passed on. So Bart arranges for one of his not too bright math students, 16 year old Ricky Bling – and he is (a rockin’ rappin’ Sawyer Nunes) to fill the spot.

Mitch meets up with his ex-girlfriend Dani (lovely voiced Kelli Barrett), who is a personal trainer now involved with Tygen, but sparks fly on reuniting with Mitch. Romantic liaisons abound as Robbie becomes smitten with blonde beauty Tawney Truebody (Becca Kotte) to the dismay of his father (Nehal Joshi); young Ricky is head over heels with Dani’s daughter Billie (Noa Solorio) and Sully has fallen for his fellow officer Roxanne Velasco (Tamika Lawrence). Some of the songs have catchy lyrics, are mainly upbeat and loud – “Jersey” (accompanied throughout by lots of Joisey jokes) and title tune “Getting’ The Band Back Together” – or downright zany as in “Hava Nagila” where you can catch the reunited Juggernauts playing a gig at an Orthodox Jewish wedding (hilarious) or Dani’s song filled with poignant meaning, “I Just Want Real.”

With musical direction by Sonny Paladino, choreography by Chris Bailey, colorful, lively costumes by Emily Rebholz, and fun scenic design by Derek McLane, it appears that director John Rando had a grand old time Gettin’ the Band Back Together.

Mostly, I was scratching my head trying to understand why this wacky musical comedy is getting such laughs . . . yes, it’s all cliché-banal . . . but seems to be a unique, don’t have to think about, crowd pleaser! 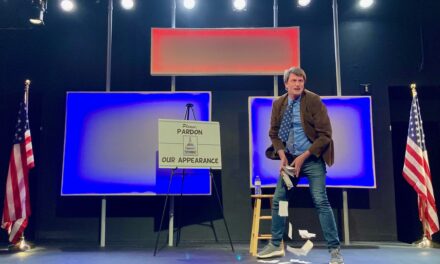 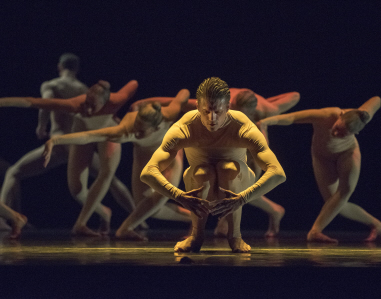 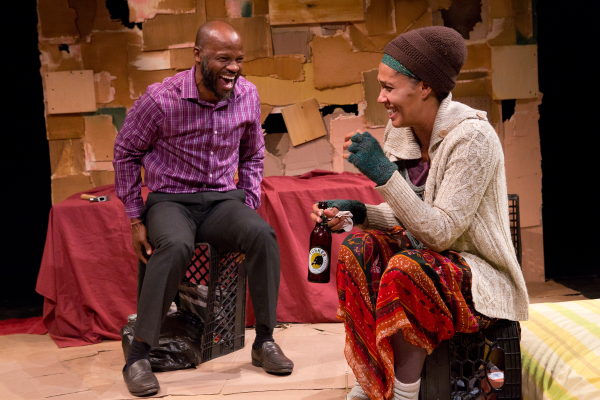