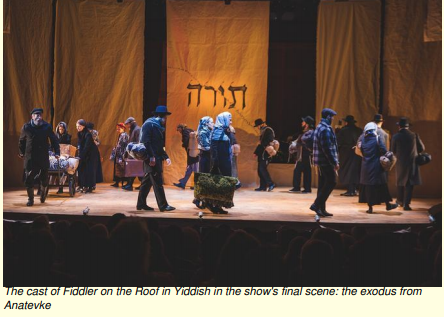 Video in Yiddish Got Bentsh Amerike

The cast of the award-winning, Off-Broadway show, Fiddler on the Roof in Yiddish originally produced by the National Yiddish Theatre Folksbiene, along with director and Academy and Tony Award-winning actor, Joel Grey, will release a video performance of “God Bless America” sung in Yiddish on TUESDAY, JANUARY 19th at 10 AM EST at www.NYTF.org. The performance celebrates and honors the ideals of the United States of America and offers a prayer for peace on the eve of the upcoming Presidential Inauguration.