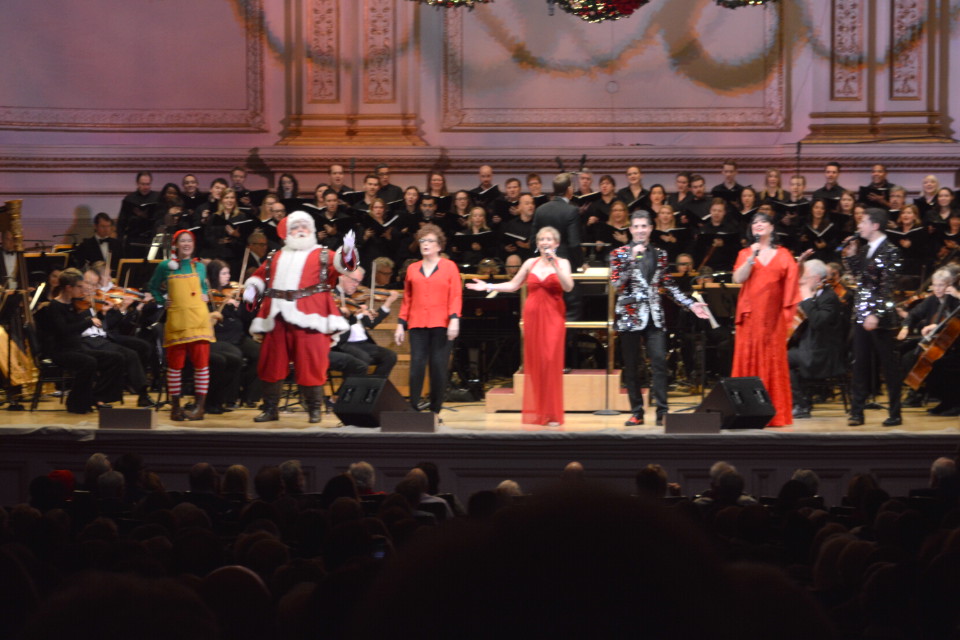 Enter Steven Reineke, New York Pops Music Director and Conductor, and the holiday cheer is instantaneous from the moment that baton rises as he swings and sways to the rhythms and sounds that originate from the many musicians on stage at Carnegie Hall. The high level energy is astounding and filled with grandeur.

Make the Season Bright – – a beautiful way to end this Pops thirty-third season encompassed two nights (December 16 and 17) of some of the best holiday music in our history. Opening with Pola/Wyle’s “It’s the Most Wonderful Time of the Year” accompanied by Essential Voices USA, the tone was set to welcome the sibling couples – Ann Hampton Callaway and Liz Callaway and twins Anthony Nunziata and Will Nunziata.

The many songs performed together, in duets and as solos filled the auditorium with lush arrangements (many by Steven Reineke) and special warmth of the season.

The twins were knockouts in sparkling sequin jackets (Will in red/white/black with matching shoes; Anthony in black) offering up standards like Wells/Torme’s magical “The Christmas Song” (Will Nunziata) and Gannon/Kent/Ram’s “I’ll Be Home for Christmas” (Anthony Nunziata). Together they sang the perfect debut song written by John Bucchino and Michael Feinstein, “Carnegie Hall.”

The gorgeous voiced sisters Ann and Liz sang a stunning “Silent Night/Mary, Did You Know?” (Gruber-Johr/Greene-Lowry) together, and individually shone – – Liz Callaway with “Flaherty/Ahrens “Once Upon a December/Journey to the Past” (from Anastasia) and Foster/Jenner’s “Grown-Up Christmas List” and Ann Hampton Callaway with “Yes, Virginia” (Schermerhorn/Whatley) and a swingin’ “Winter Wonderland” (Bernard/Smith). Note: they were their own fashion runway of varying colorful and lovely gowns.

Essential Voices USA, led by Judith Clurman, were impressive with “The Chanukah Song and Maoz Tsur (from Songs of Freedom: A Celebration of Chanukah).

The four merrymakers covered the gamut from a non-traditional spiritual and rousing “Go Tell It on the Mountain,” to Irving Berlin’s White Christmas Medley that included “Sisters” and “Count Your Blessings” and all time favorite “White Christmas.”

Santa came to town to spread some fun and smiles and lead the orchestra (his reindeer parked just outside) and the audience joined in to close the evening with a “Jingle Jangle Sing-Along.”

What a way to begin and end a season! Music for the soul and the heart. Just what we need!

The New York Pops begins its thirty-fourth season on Friday March 10, 2017 with Life is a Cabaret: The Songs of Kander and Ebb in celebration of John Kander’s 90th Birthday! www.NewYorkPops.org   www.carnegiehall.org